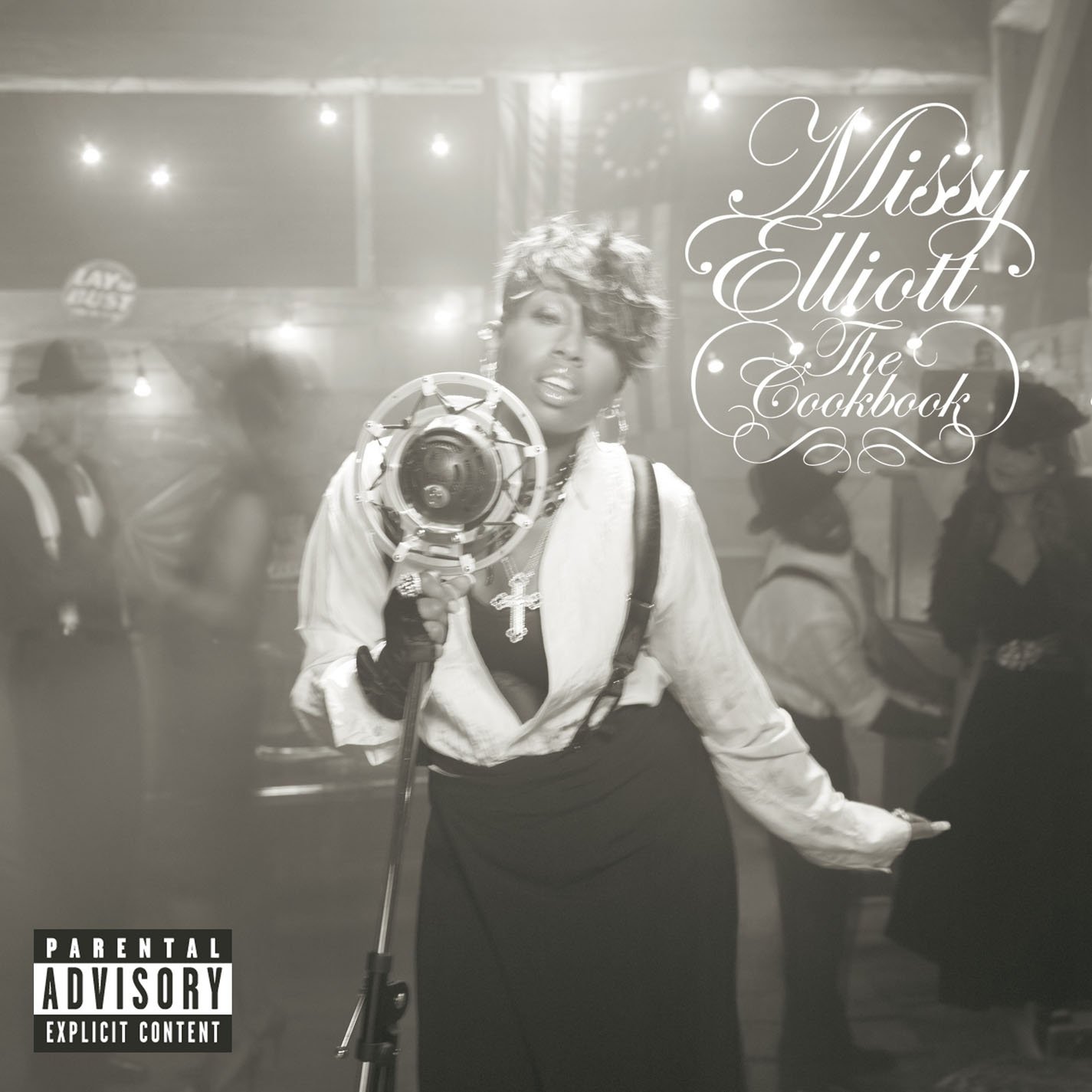 The Cookbook will probably disappoint anyone hoping to learn the nutritional strategy behind Missy Elliot’s impressive svelte-ization a couple years back (count me among them—though I’m a male Lindsay Lohan framewise, I’d like the same sexual side effects she’s been getting). Instead of serving as a guide for the creation of This Is Not A Test‘s Skinny Missy, the pages of this cookbook are a primer on how Missy let her head get fat, or, as she puts it in “Partytime,” the “number one game-talker.” Wow, thanks Missy. I was in the dark on that front. Mind throwing in some instructions on how to make a grilled cheese sandwich with that? Then again, the opening salvo of the lead-off single “Lose Control” (filled with menacing proto-grime scalar progressions courtesy of Cybotron) goes: “I’ve got a cute face/Chubby waist/Thick legs in shape/Rump shakin’ both ways.” No one boasts humble like she does. And considering the hang of her clothes on the hot retro-speakeasy album cover, one fears she’s still selling herself short.

Also shortchanged on The Cookbook is beat-scientist extraordinaire Timbaland, the Winslow Leach to Missy’s Phoenix. Timbaland is behind only two tracks of the album’s 16 dishes, and they’re included at the top of the album under the liner-note designation “Starters & Sides.” Whether a result of her last album’s relatively tepid sales or merely because Timbaland is finally starting to make good on his promise to retire, the message reads clear: this meal is 100% Missy. Well, it’s 100% Missy minus the few percentage points that can be credited to the hysterical Jamaican house cook (by way of Uncle Tom’s Cabin’s Topsy) Missy invokes in the album’s first skit—the one that babbles on about her “favorite episode Fear Factor-r-r.”

On second thought, better subtract a few more for the rogues’ gallery of guest spots (the more the recipes change, the more they stay the same), which run the gamut from inspired—like Slick Rick on “Irresistible Delicious”—to practically ruinous. “Joy,” the first and better of the two Timbaland tracks, is a steamy, slow-bumping Jacuzzi with 8-bit synth triangle for bubbles and a sultry half-speed breakdown (riding the crest of the “screwed and chopped” wave) that unfortunately serves as the overture to a flat cameo by Mike Jones. (We’ve clearly reached the point where the incessant question “Who is Mike Jones?” is beginning to beg the follow-up “Who does he think he is and why does he keep asking me to call his cell?”) On the other end of the album—and the spectrum of quality—are M.I.A. and Vybez Cartel dusting their exotic patois over “Bad Man,” a booming gene-splice between the drum cadences of Destiny’s Child’s “Lose My Breath” and the epic kick thuds of the Chemical Brothers’ “The Test.”

Nearly every style and sound on The Cookbook gets a second helping, as when “We Run This” and “Can’t Stop” both take a crack at assimilating the sound of united funk bands and speedy snare fills to surprisingly diverse effect: the former ricochets off the walls with loose-limbed abandon, while the latter practically trips over its own tightly-wound energy. The double-shots aren’t really consistent enough to be considered a structural theme, nor, for that matter, is the eclecticism of producers and tempos. If there is a connective tissue to be found throughout the album, it’s probably that sampled guttural holla “YES!” that gets interjected with little discrimination. It isn’t until the affecting “Remember When” (a pretty tune, though a little too reminiscent of Test‘s stunning album-closer “I’m Not Perfect” to be a complete success) when the awkward enthusiasm of the exclamation becomes noticeable, and it just happens to be during the song when Missy remorsefully cops to infidelity. A canny production detail, the yelps tear through the sentiment like the now-tainted memories of the relationship Missy is desperately trying to save. Leave it to Miss E to be able to make ecstasy sound like penitence, and vice versa.