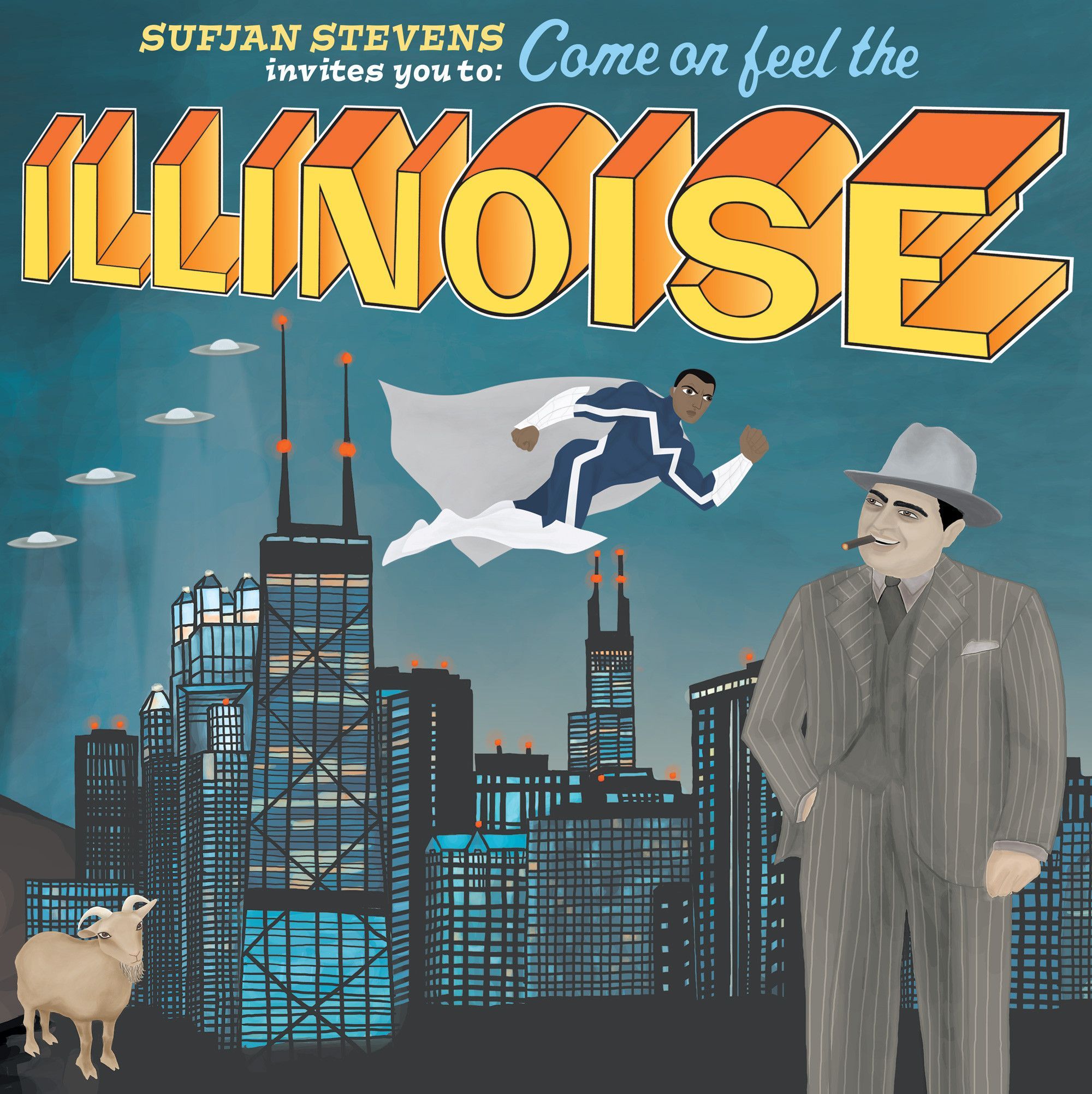 Threatened to be overshadowed both by its ostensible gimmick and by a deafening roar of hype from the indie-rock press, Sufjan (pronounced SOOF-yan) Stevens’s Illinois, his second album in a proposed state-by-state travelogue (following 2001’s homestate tribute, Greetings From Michigan) and his fifth album overall, instead swaggers fully into the light, instantly asserting itself as one of the year’s most remarkable recordings. Illinois offers no shortage of immediate pleasures—the recorder flourish that opens “The Black Hawk War,” the anthemic singalong chorus of “Chicago”—but it is ultimately the type of dense, challenging project that demands to be repeatedly, actively engaged.

While Stevens has clearly done his requisite homework for Illinois, investigating the lore of the state’s smaller towns and strengthening his fluency in the likes of Lincoln, Sandburg, and even Gacy Jr., the state proper is but a starting point both for his insightful self-analytical streak and his adventurous compositional gifts. The refrain of the fascinating call-and-response “Come On! Feel The Illinoise!,” for instance, finds Carl Sandburg asking Stevens, “Are you writing from the heart?” And, with song titles such as “To The Workers Of The Rockford River Valley Region, I Have An Idea Concerning Your Predicament” and “Decatur, or, Round Of Applause For Your Stepmother!,” it’s perhaps too easy to dismiss Stevens’s writing as defensively glib. The key distinction, then, is that Stevens doesn’t take himself too seriously, but he approaches the ideas that infuse his work with the respect they most certainly merit.

The highlight of an album full of them is “Casimir Pulaski Day,” in which Stevens mourns a girlfriend dying of bone cancer. As he sings, “Tuesday night at the Bible study/We lift our hands and pray over your body/But nothing ever happens,” he distills a profound sense of spiritual disquiet into such a simple, even naïve image that the song’s final stanza is stunning in its complete explosion of the oft-recited, “The Lord giveth, and the Lord taketh away.” As he did on last year’s Seven Swans, Stevens explores his Christian faith with an honesty and openness that strike as refreshingly atonal with the greater sociopolitical climate. Still, he isn’t above the occasional twee wordplay, rhyming “Ronald Reagan” with “Xylophagan” on “They Are Night Zombies!! They Are Neighbors!! They Have Come Back From The Dead!! Run For Your Lives!! Ahhhhhh!,” or using Decatur almost entirely for its nearly limitless potential for rhymes.

Perhaps most remarkable about Illinois is that Stevens’s exceptional lyrics are surpassed by his diverse, ambitious compositions. While his familiar brand of neo-folk is well represented (as on the appropriately eerie “John Wayne Gacy, Jr.” and “Decatur”), the bulk of the album showcases a breadth of structures and styles that, at various turns, recalls the best of Richard Buckner or Jim White. Part I of “Come On! Feel the Illinoise!” (subtitled, “The World’s Columbian Expedition”) forces a 5/4 time signature onto the frame of an epic-length pop song, only to shift to a more straightforward 4/4 meter to foreground the thematic purpose of Part II (“Carl Sandburg Visits Me In A Dream”). Which is to say that Stevens fully grasps the importance of structure as a means to enhance theme—in recent memory, Carina Round’s The Disconnection is perhaps the best analog—in a way that elevates his work above that of both his mainstream (Howie Day, Gavin DeGraw, Jason Mraz) and independent (Iron & Wine, Devendra Banhart) contemporaries.

That he plays most of the instruments—including acoustic guitar, piano, alto sax, electric bass, drums, banjo, Wurlitzer, flute, accordion, glockenspiel, and at least 20 more—and still writes songs that often surprise for their minimalism is just stupid good. Sufjan Stevens gets everything right. And, ultimately, that’s how Illinois surpasses expectations. From its framing gimmick and its anti-folk folk songwriting to its he-has-to-be-kidding song titles and its show-offy instrumentation, Illinois should reduce to a simple stunt performance. That it’s pop-art of the highest caliber, instead, cements Stevens as one of the most vital voices in music today. It’s all but inconceivable that the next 48 albums will match Illinois’ quality, but Stevens is one of a select few artists who could justify such long-term anticipation.

Review: Sufjan Stevens’s The Ascension Aims for Great Heights but Often Gets Lost