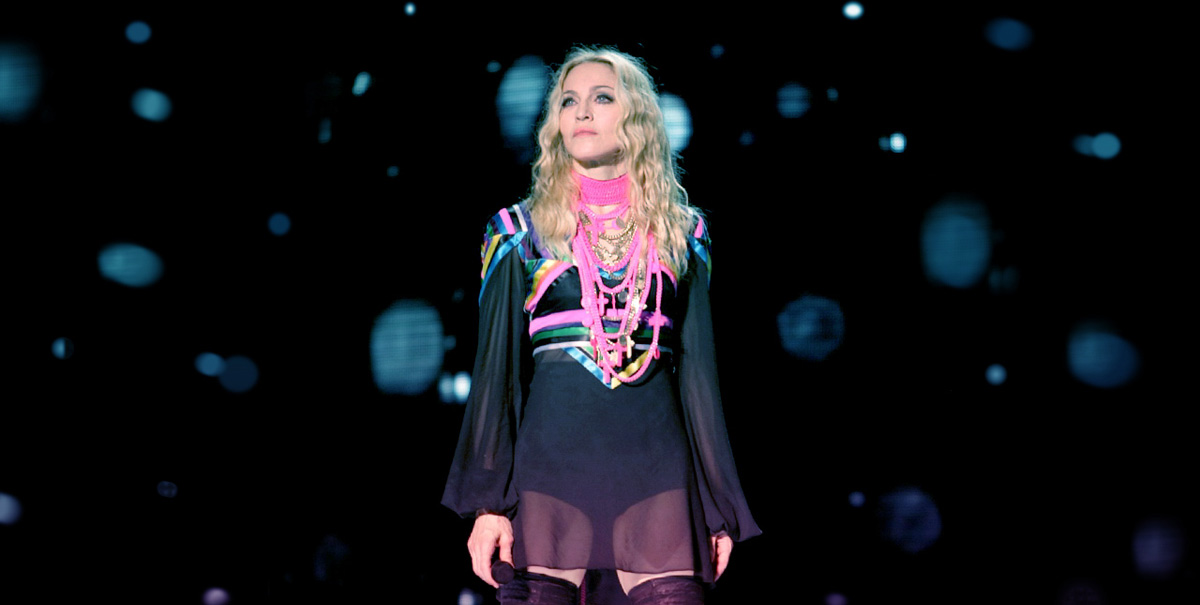 ItÔÇÖs MadonnaÔÇÖs job to create buzz. Hence the name of her Sticky & Sweet TourÔÇöonly slightly less misleading than her 2004 Re-Invention Tour, which suggested a career change but settled for a big-band version of “Deeper and Deeper.” In her latest show, Madge enters stage in an “M”-encrusted throne grinding to “Candy Shop,” but itÔÇÖs not quite the 50-year-old porn romp you might expect. By the time she transitions to “Human Nature” and Britney Spears shows up in a video trapped in an elevator and echoing, “IÔÇÖm not your bitch/DonÔÇÖt hang your shit on me,” itÔÇÖs the same as all her shows: A remixed mind-fuck.

Before “4 Minutes,” the Top 5 duet with Justin Timberlake, it had been seven years since a Madonna single seriously contended on mainstream radio. (Part of me wanted to think she was selling out with Hard Candy. The same artist who sampled Main Source on “Human Nature” was suddenly tapping…Timbaland? But then the Pharrell-produced “Heartbeat” and “Give It 2 Me” are both as pure and as fake as anything sheÔÇÖs made since her debut 25 years ago.) But as always, sheÔÇÖs also in the news for a couple other things: her directorial debut, Filth and Wisdom, and her maybe-it-did-maybe-it-didnÔÇÖt-happen affair with Alex Rodriguez, which prompted Adam Sternbergh in New York to theorize that her “true art” is that “sheÔÇÖs so good at making us talk about her.” ItÔÇÖs a cliché to say Madonna is a queen of self-promotion, but SternberghÔÇÖs scarily misogynistic description of the singer as a “hyperbaric cougar” and an “asexual-android” gets at what has nagged the singer for years: the mediaÔÇÖs constant fascination with eviscerating her.

So itÔÇÖs no surprise that MadonnaÔÇÖs new show comes off not unlike an act of self-defense. She dresses in a boxer uniform for a “Die Another Day” backdrop, emphasizing her already-muscular arms. Unlike your run-of-the-mill diva, Madonna is willing to get dirty for her art, and she sometimes gets lost in her backup dancersÔÇÖ routine, though sheÔÇÖs quick to remind the audience, “IÔÇÖm still the one in control.” Even so, Madonna has always been willing to make fun of her own image. During “SheÔÇÖs Not Me,” she makes out with a younger version of herself (the horny bride from the 1984 VMAs), and then kicks her to the curb.

The most overtly political moment is a montage called “Get Stupid,” which starts with an image of a swastika and ends with images of John Lennon and Barack Obama. A song about the freedom to dance (“Beat Goes On”) becomes an anthem for political frustration, and itÔÇÖs the only moment thatÔÇÖs generated any real controversy, but she doesnÔÇÖt say anything about either the Republican or the Democratic candidate that she hasnÔÇÖt said before. The power of any great Madonna song is implicit: “Say what you like/Do what you feel/You know exactly who you are.”

Past becomes present at a Madonna show. The singer is known for reinventing her old materialÔÇöno classic is sacred (this time she turns “Ray of Light” into even more of a drug-induced European dance party). There are some uninspired rock-star moments (basically anytime she holds an electric guitar), but MadonnaÔÇÖs ability to redefine and recontextualize every song is still awe-inspiring. A little bit of her Erotica-era cheekiness reappears during Sticky & Sweet, from putting her dancers in bondage outfits during a mashup of “Vogue” and “4 Minutes” to jumping rope during “Into the Groove,” the backdrop of which pays homage to her old friend, the late Keith Haring.

SternberghÔÇÖs right in a way: “Of course itÔÇÖs Madonna.” She makes the rules, but she also breaks them. Like a sex instructor, Madonna rules over her audience and tells them when theyÔÇÖre allowed to get off (at one point mock-masturbating over someoneÔÇÖs head). And when the words “Game Over” flash on the screen at the end of the show, youÔÇÖre just happy to have played along.

WeÔÇÖre committed to keeping our content free and accessibleÔÇömeaning no paywalls or subscription feesÔÇöso if you like what we do, consider becoming a SLANT patron, or making a PayPal donation.

Review: Lili Horv├ítÔÇÖs Preparations to be Together for an Unknown Period of Time

Review: Palmer Is a Touching Tale of Friendship Full of Southern-Fried Clich├®s

We use cookies on our website to give you the most relevant experience by remembering your preferences and repeat visits. By clicking ÔÇ£AcceptÔÇØ, you consent to the use of ALL the cookies.
Cookie settingsACCEPT
Manage consent