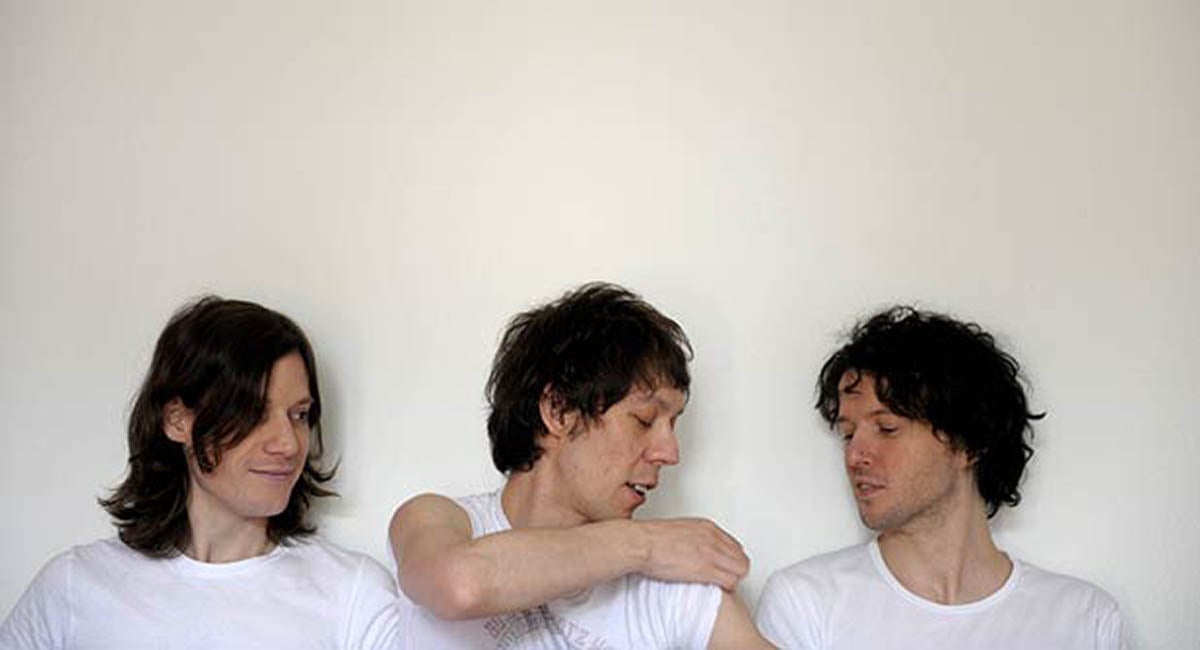 For a certain kind of music nerd, the idea of the humorous rock song will always be blasphemy: rock is about rocking, fucking, liberation, etc. At least that’s how it used to be; I suspect that the contemporary equivalent of the embittered rockist for whom Iggy & The Stooges are the pinnacle of civilization is the person outraged that most rock critics these days come from indie-rock land, where raw power is low on the priorities list and ass-shaking is optional.

Typical comment-board shot from the massively contentious A.V. Club’s list of the Top 25 Albums: “Christ jesus: boring white people pick boring white people’s music. … I know that you feel safe with 90% of this music because it won’t expose that you can’t dance … but you are MISSING OUT on a wild world of awesome shit that’s going down right now. Please, get up off your SORRY FUCKING ASSES and go do something dirty or scary.” I’m bizarrely fascinated by these kind of aggrieved comments, which suggest the terrifying idea of rock without irony, where no one learned anything from Kurt Cobain’s suicide and where to truly understand music you have to be constantly living in a 16-year-old’s idea of decadent Bohemia.

I’d like to take all these people, sit them down with 1990s’ debut album Cookies and watch their heads explode. From super-excellent opener “You Made Me Like It” onwards, 1990s display a) a great ability to crank out “raw,” rocking riffs like ‘90s Britpop is still depending on them to stay alive and b) an utter disdain for writing serious lyrics to go along with them. “You Made Me Like It” isn’t about getting drunk, going on tour, or any of the four other topics serious rockists can sing about: it’s about reluctantly accepting a music geek’s recommendation and growing into it. 1990s proceed to crank out the riffs, exploding them from the inside out with self-consciously stupid lyrics: the results are catchy and hilarious in a way I haven’t heard since two years ago, when Brakes’ most excellent Give Blood dropped. (Also a British band, by the way; why is it the closest thing America’s had to a funny, self-aware band capable of sly self-mockery since Pavement is, uh, Electric Six? It’s just not fair.)

Some of the songs are jangly-pretty without irony, like second track “See You At The Lights.” But everything goes better with self-mockery. Hence, “Cult Status,” which tackles head-on the barely-famous status of lead singer Jackie McKeown and bassist Jamie McMorrow. If those names sound familiar to you, you somehow got your hands on the music of their old band, The Yummy Fur, about whom basically all I know is that they’re insanely hard to find copies of and Bishop Allen likes them. But that, of course, is always enough to be someone’s favorite band: “My cult status keeps me alive,” yells McKeown some eight times in a row over a big dumb rock riff that goes pretty much nowhere before dropping out for the punchline: “My cult status keeps me fucking your wife!”

If you don’t think that’s funny, better not stick around for “Enjoying Myself,” which lays out the de rigeur routine for a hipster party with pitiless honesty: talk loud, take some drugs, disappear for an indefinite amount of time. Like a pedantic logician, McKeown speak-sings lyrics LCD Soundsystem would reject as too heavily sarcastic: “I like enjoying myself/I like enjoying you too/I like enjoying myself at parties/and so do you.” The conclusion? “We like enjoying ourselves!” But wait: “Now I’m here with my friends and we are taking some drugs/it’s so fun we shall be taking some more soon.” The uneasy context here (McKeown has a tangled drug history) means that, thank god, they’re not about to immortalize their excesses as some kind of Rimbaudian defiance of the status quo. Elsewhere, “Pollokshields” takes the time to diss an unquestioned hipster landmark by insisting “Chelsea Hotel/didn’t ring my bell.” It’s a tricky genre—anti-hipster rock for, you know, hipsters or the people who care about them—but irresistibly executed here. Frankly, if the Libertines had been smarter, they could’ve grown up to be these guys: riff sharp and production shined (by Bernard Butler, who non-coincidentally produced some key Libertines singles), they’re the first sign of life for traditional Brit-rock in years. Without the lyrics, they’d be enjoyable trad-rock; with them, they’re possibly alienating the people who might’ve gone for that in the first place.

Because, according to Nick Southall, “One cannot be a music journalist if one doesn’t have an opinion on the second Burial album”; because it landed at #10 on Pitchfork’s Top 50 Albums of the Year with the claim that “Untrue is for everyone” (and because Idolator promptly called their bluff: “Really? Everyone?”), and because it’s currently perched on top of Metacritic’s albums for the year, a few words seem to be in order. The law of averages gives us these weird burps sometimes, where albums in the electronic/death-metal/country/whatever realm—the fields of musical specialists, for whatever reason—end up being trumpeted as a great cross-over album for the mainstream. This is generally untrue, it seems like: it was untrue earlier this year, when The Field’s minimalist loops were trumpeted seemingly solely because indie kids could laugh at the Lionel Richie sample at the end, and it’s true now when I listen to an album that seems equal parts analog hiss, “Twin Peaks”-ian synths and distorted “ethereal” vocals.

I put “ethereal” in scare quotes because Untrue, above all else, seems like a record that’s trying too hard to be haunting. The general idea seems to be that Burial is all about encapsulating big-city late-night anomie; instead of insinuating this subtly, it’s right there in the song titles. “Archangel,” “Ghost Hardware,” “Shell of Light”: all promise some kind of transcendent mood music to cocoon yourself in, alienation made blissful. Other song titles—“Homeless,” “In McDonalds”—are grittier in premise but sound the same, meaning that OMG THE UGLY AND THE BEAUTIFUL ARE TWO SIDES OF THE SAME EMOTION. Whatever.

I’m not sure what music critics would do with this kind of music if there weren’t concrete visuals to tie it into; apparently listening to this is supposed to tell me what it feels like to be alone at night in a big city. Aside from the fact that I know already, I have to wonder if there isn’t some kind of synesthesia weirdness going on here, where people have watched Morvern Callar one too many times, mashed it up with Lost In Translation’s more heavily ambient moments, and concluded that that’s what modern anomie looks/feels like. There’s a whole nexus here of images and textural associations about big-city alienation in the ’00s: flashing lights, empty streets, ambient electronica. This is “cinematic” music in the sense that the images it conjures up seem to be ripped off from Sofia Coppola or something; otherwise, it wouldn’t sound like anything in particular to me. I might find this endearing or atmospheric if I heard it in the context of an anime apocalypse or something similar. As it is, all I hear is muffled vocals, lots of weird stray sounds (some sound like a deep-fryer in action to me, others like random metallic clanging), and plenty of interesting analog hiss, all of which can only take you so far. I dig “Archangel”—whose vocal hook is loud and clean, making it sound like some kind of lost house classic—and closing “Raver,” which pretty much lives up to its title. The rest is all kind of indistinguishable to me.

Randomly scrolling through iTunes, trying to decide which long-unheard 2007 album I should listen to for catch-up, I settled on The Brunettes’ Structure & Cosmetics because I recall having read that they’re cute chamber-pop. This is a lie: no strings, no poncy harpsichords. There is, however an awesome song called “Brunettes Against Bubblegum Youth” to kick things off that has refused to leave my head for the past 3 days. This song involves them yelling over and over again “B-A-B-Y I love to call you baby/My sugar, my honey/Don’t care if it sounds cliche” with the stress and metrical placement in all the wrong places to shoehorn it into the song, which involves a lot of pissed-off Phil Spector saxophones. It’s mindless and catchy and just the right side of annoying; unfortunately, a lot of this album goes the wrong way from thereon. I have no idea if New Zealanders Heather Mansfield and Jonathan Bree are a couple or just play one on the record; still, they make that unfortunate term “couple rock” come to life. “Stereo (Mono Mono)” would probably make the actual Spector shoot himself: separated from each other on the left and right channels, the couple eventually unites in well-mixed harmony, which is about as gimmicky and stupid as it sounds. It seems hard for the Brunettes to settle on a song without attaching some kind of self-deflating crap to it: “Obligatory Road Song” might be nice if it wasn’t called that; there’s an adorable moment when Mansfield tells Bree “I think that 40s gone to your head,” but its buried in all the gimmickiness. I need to stop downloading random albums based on lukewarm Pitchfork reviews that use buzzwords I like like “baroque pop,” which I thought was pretty specific but guess not. I’ll be spending the next few weeks playing frantic catch-up for the inevitable, way-overdue Top 10, which will be posted in a couple of weeks in order to be absolutely last in the relevance sweepstakes; The Brunettes totally aren’t helping my cause.

Review: Eurythmics, Sweet Dreams (Are Made of This)