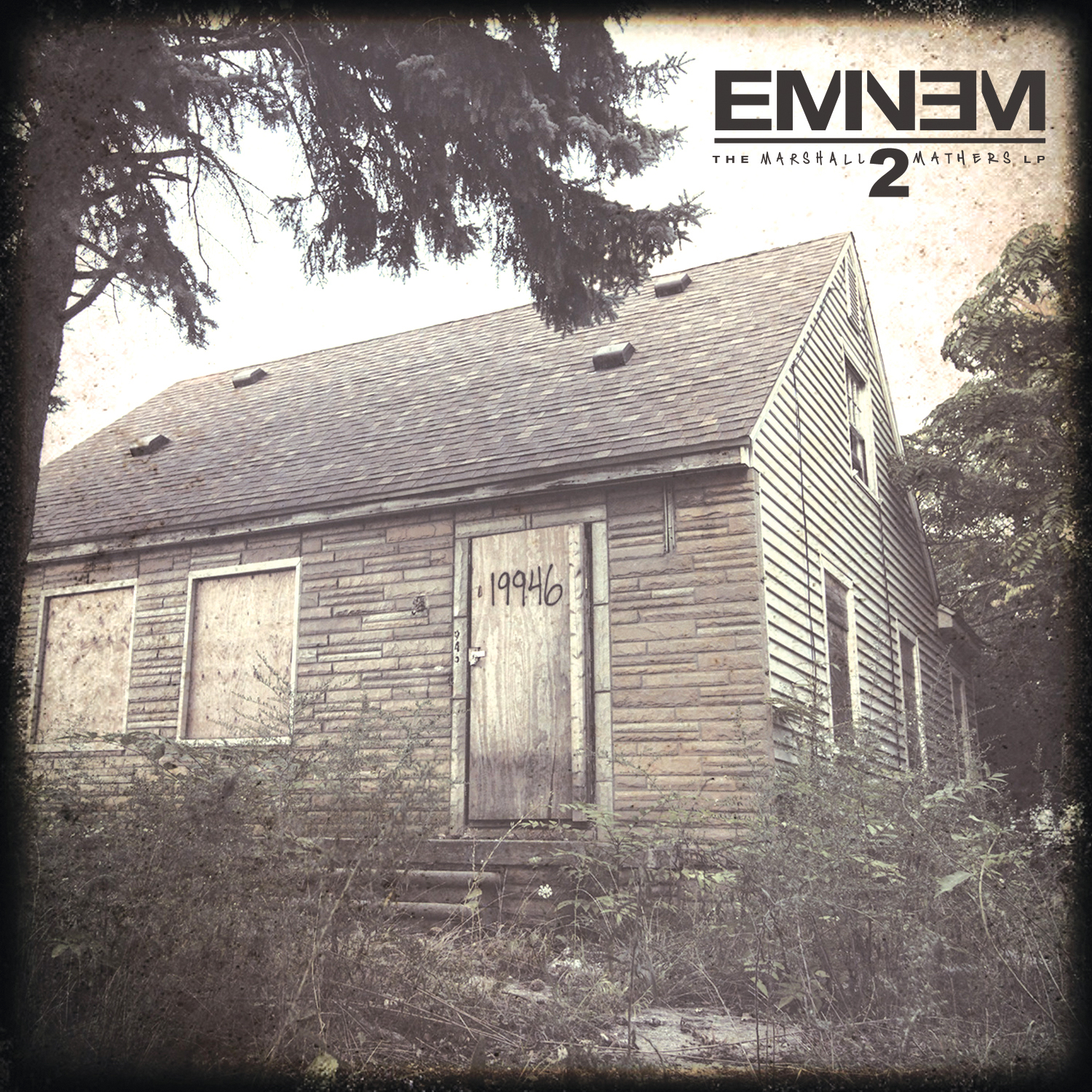 The extant models for aging gracefully in rap all seem rather bland: Jay-Z as CEO/family man, Ice Cube as family-comedy actor, Xzibit as car stylist. On The Marshall Mathers LP 2, Eminem rejects the premise of the question altogether, instead positing: Why age at all? Why shun the aggressive energies of one’s early work? Though he extends an olive branch to his mother on “Headlights,” Eminem remains mad about most things, including rappers who talk about him, rappers who don’t talk about him, the fact that he’s 41, and those priggish censors who are still seeking to steal his microphone.

Except that they’re not. Eminem’s shock value has softened by dint of familiarity, and his mockery of the PC police feels especially irrelevant here. But then, that’s part of the joke. “Michelangelo with a paint gun” is one epithet Marshall Mathers appropriates for himself on “Rhyme or Reason,” and for the most part he’s still the reigning king of toilet-papering the houses of uptight America. And that’s an ever-harder road to tread. As Em ages, he risks making good on what detractors have suggested from the start: that he’s a peddler of provocation, virtuosic but without virtues beyond the merely formal. The album’s production, meanwhile, offers little that’s new. Dr. Dre and Rick Rubin have crafted, or at least enabled, a few too many of the power-ballad slow jams that Eminem has grown increasingly fond of, alongside several guitar-driven anthems that come on as subtle as Jock Jams.

Eminem is no one’s hack, though, and the album has tantalizing moments of vintage performance. He has a simple routine for maintaining hip-hop primacy: To “keep up with the competition,” he need only listen to his own past work. But that’s a playful claim the rest of the album belies. He’s been listening to a lot of rap and renders it here as a 79-minute ventriloquist’s act, one more ambitious, in delivery and ego, than anything since 2002’s The Eminem Show. These songs build a web of allusions, through delivery or partial melody, that lends a retrospective feel to the otherwise traditional posturing. “Rap God” has already provoked a lot of heated words about Em’s abiding affection for slurs like “slut” and “faggot,” but the song is also notable for the rapper’s ever-shifting impressions of other high-profile MCs (Kendrick Lamar is the most pronounced influence in the first part of the track). Eminem has always appropriated the voices of his haters, his exes, and his stepdad, but “Rap God,” which feels suspiciously like a dig at Kanye’s “I Am a God,” is the centerpiece of an album that exudes a dialogic play we haven’t seen from Slim Shady in over a decade.

Important for a rapper who’s always enjoyed working with pop divas, Eminem fucks with voice not just as an MC, but also as a producer. On his ballads, he’s consistently outsourced the earnestness to female vocalists, from Dido to Rihanna, while keeping his own fingerprints on the dark, conflicted portions of the songs. On “The Monster,” he flashes a horrifying series of images before us and promptly denies responsibility: “Just relayin’ what the voice in my head says/Don’t shoot the messenger.” Rihanna delivers her hook with some very loaded lines, conjuring an immediacy of emotion that amplifies Eminem’s profession of don’t-judge mentality: “You’re tryin’ to save me/Stop holdin’ your breath/You think I’m crazy/Well, that’s not fair.” It’s hard to hear these lines without thinking of Chris Brown, and as with many of Eminem’s most memorable tracks, it leaves you feeling uncomfortable—or ought to.

On “Evil Twin,” he offers an appraisal of his entry into the game: “They was sleepin’, I made ‘em stop snoring/Made ‘em break out their popcorn/Now I’ve been in top form/Since N.W.A was blarin’ through my car windows, leanin’ on the horn.” Popcorn is a great word here, given Eminem’s flair for the cinematic; on MM2 the camera work is a little shaky, as Em picks up one image only to flip plotlines immediately, as he does on unfocused, throwaway broadsides like “So Much Better.” “Love Game,” however, is right on point, from the ‘60s surf-rock beat to the codpiece-rattling, as Eminem induces Kendrick Lamar to resurrect Sherane, a character from Good Kid, M.A.A.D City, in the role of Kim, Em’s longtime femme fatale. The most touching track, of course, is “Headlights,” where he offers a fairly shocking reappraisal of his mother, Debbie, who’s proven such a handy villain over the years. True, it’s sad that it took him this long to identify his father as the more deserving target of his bile, but the simplicity of a line like “Thank you for being my mom and dad…I will always love you from afar” is moving, especially if you’ve followed the soap opera from the beginning.

The benediction to Eminem’s mother, however, is impossible to square with his legion use of misogynist and homophobic insults, aggressive postures that haven’t been shocking for at least a decade and which he fails to develop in any meaningful way here. Em’s hate speech is an expression of a broader misanthropy, part of his persona’s paranoiac energies; such homophobic diatribes share something with the horror-show, surrealist satire of American Psycho. At his basest, Eminem speaks not as a human, but as a mood, or a subdued but general malignancy that, if we judge by sales, a lot of people connect with. Robert Christgau called Eminem’s breakthrough The Slim Shady LP a “satiric fiction,” which it was, but he also called it “cautionary,” which it wasn’t. On “Rhyme or Reason,” Eminem challenges his critics to “Look for a reason for it/There ain’t none.” He was never about telling cautionary tales; he remains secure in his role as provocateur nonpareil. The residual misogyny and “faggot”-bashing is off-putting, and its self-awareness doesn’t earn any points, but mainly it indicates a worrisome lack of imagination. The guy used to be funnier.