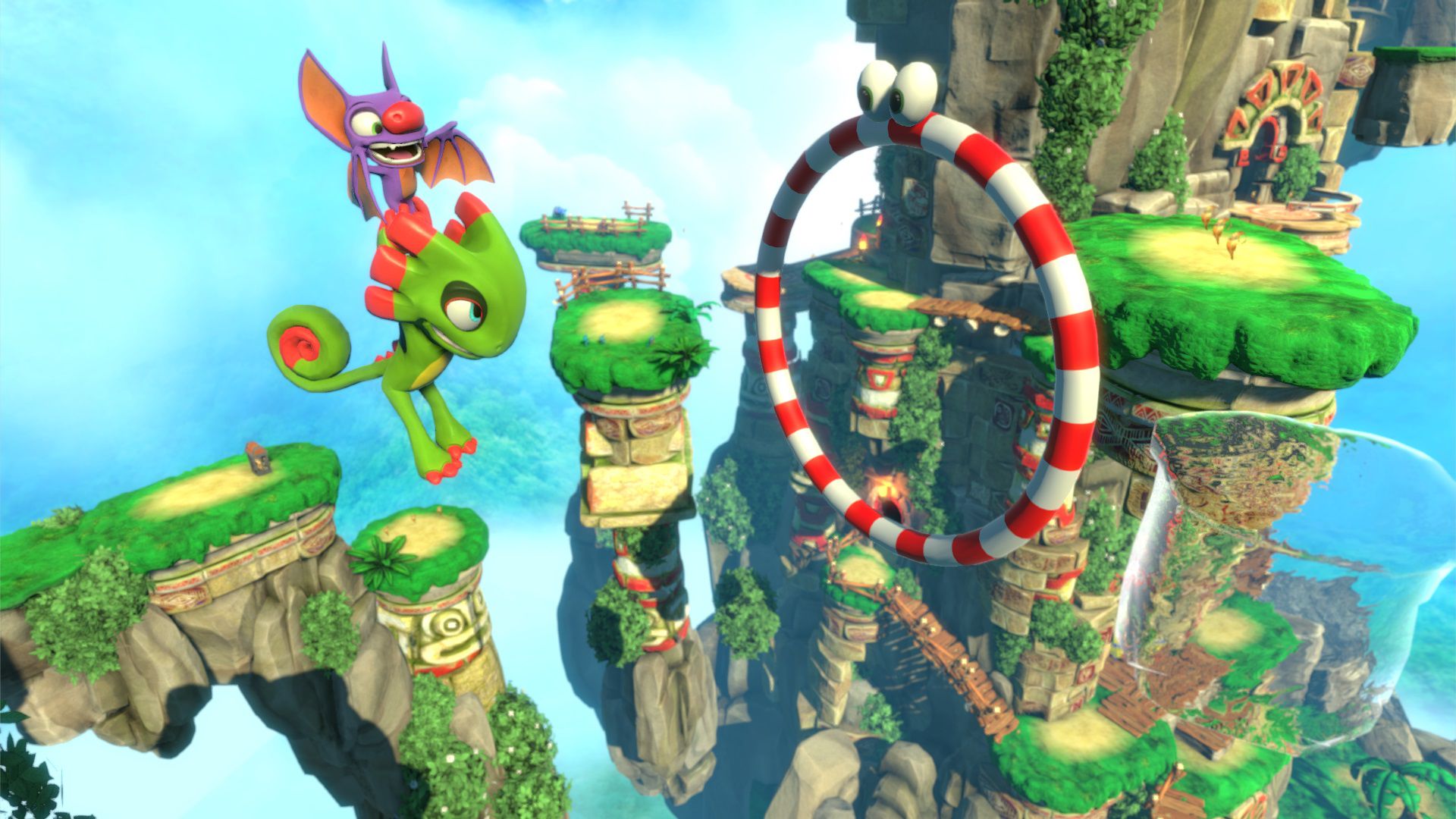 There’s something appropriate about hit points in Yooka-Laylee being measured in butterflies. In short, new life through transformation. Given that the game is so gleefully and recklessly reliant on the most obvious of puns, this symbolism was likely deliberate on the part of the game’s developer; at the very least it was subconscious, as several key people behind Banjo-Kazooie and a bunch of other Rare hits now work for Playtonic Games. This game, though, isn’t just a spiritual successor to classic collect-a-thons, but rather, it’s a spirited one—a work born not just from nostalgia, but from a genuine love of cheap jokes, colorful characters, and imaginative worlds.

Yes, Yooka-Laylee recycles a lot of recognizable gameplay mechanics, such as a Buddy Slam ground-pound that evokes Super Mario 64 and the Reptile Rush, which is clearly inspired by the Sonic the Hedgehog spin maneuver. But the game isn’t lazily cribbing from the past, as playing through Yooka-Laylee becomes not unlike watching a cover band riff their way to a new sound. Many challenges require players to figure out how to use familiar moves in novel ways, especially when it comes to the Kirby-esque Slurp State, which allows the lizard Yooka and bat Laylee to take on the physical properties of any eaten object; a lick of honey allows the duo to walk up once-slippery slopes, and a cannonball prevents them from being blown away by gusts of wind.

Not to mention that some of the often comic abilities that Yooka and Laylee can wield here are unlike any you’ve ever seen in a video game, from the lizard’s use of fart bubbles to walk underwater or the bat’s use of her Sonar ‘Splosion screech to shatter fragile objects. At the first hint of something derivative, a character will lampshade the moment, turning it into a meta-joke about blowing through a Kickstarter budget or, in the case of Rextros Sixtyfourus, a polygonal dinosaur who stands beside giant arcade cabinets, smartly commenting on the changes between old- and new-school design.

Yooka-Laylee is literally built on an overabundance of ideas. High up in the executive offices of Hivory Towers, the villainous Capital B (think of him as a cross between Despicable Me’s Gru and a bee) and his henchmanager, Dr. Quack, are vacuuming up all of the world’s books in an effort to reconstruct the reality-altering One Book. Every challenge Yooka and Laylee encounter revolves around collecting these magical Pagies (often found imprisoned in Cagies), and there’s surprisingly little repetition to these tasks.

Take, for example, the four piggish knights of Hamalot. In one world, you might simply have to follow clues to track them down; in another, you’ll have to transform into a helicopter and speedily chauffeur them to their destination before time runs out. Kartos, the humorously named “God of Ore,” provides a series of Donkey Kong Country-inspired 2D minecart challenges, each of which has its own gimmick, whether that’s gambling on which of Capital Cashino’s tracks to follow or adjusting to the lower gravity found in Galleon Galaxy.

Yooka-Laylee also plays on this theme of variation by allowing each of the five Grand Tome worlds to be “expanded” by trading in some of the Pagies. This provides players with a reason to re-explore each of these worlds, as entirely distinct challenges can be unlocked; for instance, Glitterglaze Glacier’s open world gives way to an isometric dungeon called the Icymetric Palace. In fact, each Grand Tome world is often filled with interconnected passages and devices with which to manipulate the environment, whether that’s finding a way to remove the poison from the waters in Moodymaze Marsh or firing water and ice into a giant cloud so as to transform Tribalstack Tropics from a temperate jungle into a waterlogged world or frosty region.

There are more personal transformations, too, thanks to former Quack Corp scientist and Yooka and Laylee’s ally, Dr. Puzz, and her D.N.Ray: Where a lizard and bat might not get the job done, perhaps an anthropomorphized snowplough or colorful shoal of piranha might. No matter how absurd Yooka-Laylee’s designs get (and this is a game that features the pants-wearing, move-selling Trowzer Snake), there’s always a perfectly logical use for them.

Only rarely does the game’s homage get a bit too thick. The cast speaks in an irritatingly unskippable gibberish language, boss fights are overly long, and mandatory “Quackfire” quizzes interrupt the gameplay. But even these low points ooze creativity, as the written dialogue is filled with jokes (Cumulo Nimble introduces “Cloud-based racing, how next-gen”), the distinct bosses range from an angry, widowed moon (Planette) to a short-sighted supercomputer (I.N.E.P.T.), and the quizzes provide a well-earned opportunity to go back and reflect on all the wild creations scattered throughout each of the five massive worlds. The ability to find a use for even potentially outdated design elements is proof that Yooka-Laylee isn’t interested in coasting on nostalgia, but in establishing brand-new memories for the next generation.