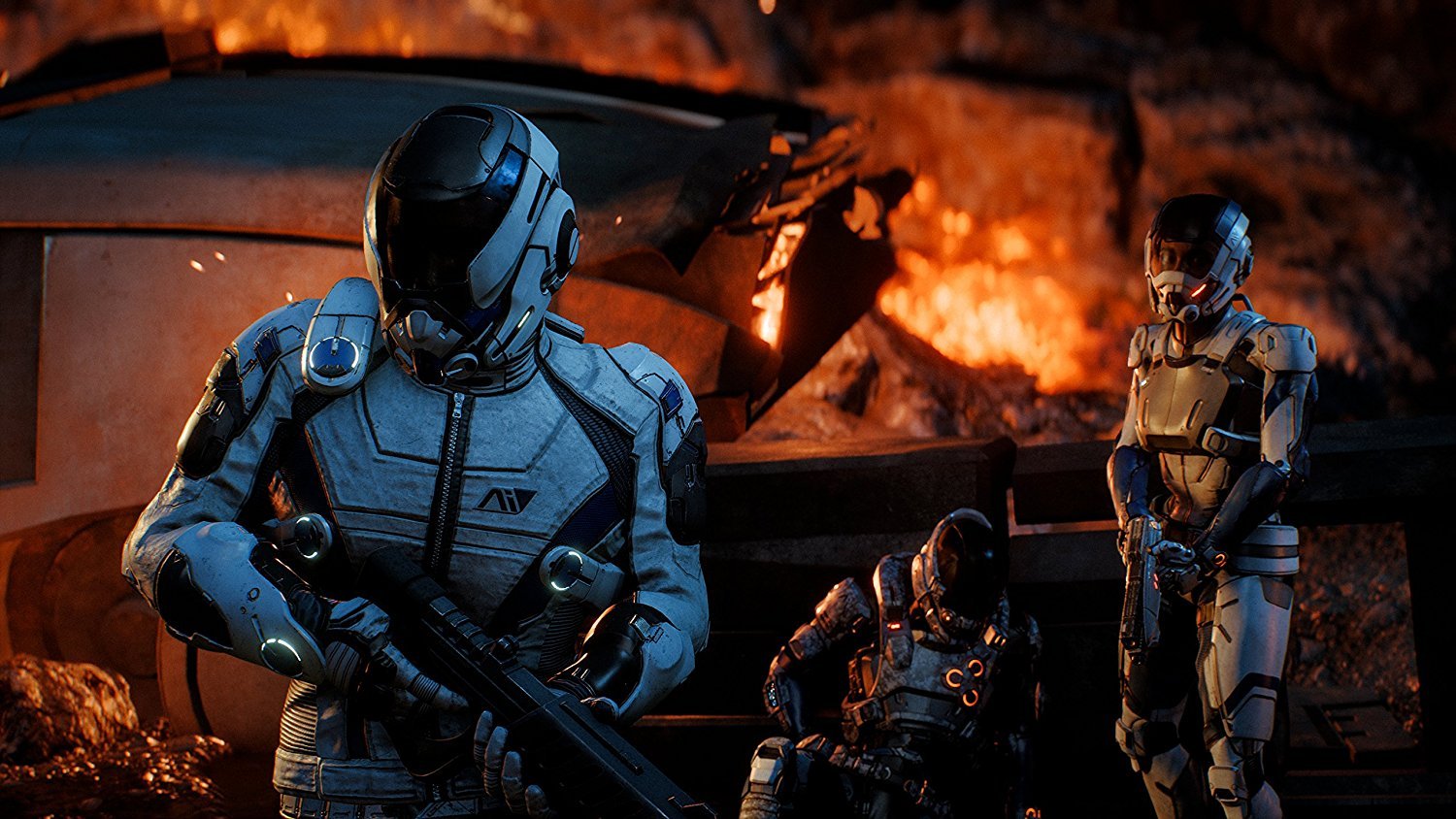 So far as the basic plot of Mass Effect: Andromeda goes, a small fraction of humans, salarians, asari, krogan, and turians cryogenically froze themselves just before the events of Mass Effect 3 and left behind the Milky Way in search of new opportunities in Andromeda. Their arrival, some 600 years later, is met with disaster: A spreading dark-matter cloud labeled the Scourge cripples the human ark, a militant alien force known as the Kett seeks to genetically integrate all newcomers, and all seven potential “golden worlds” have been rendered uninhabitable by extreme weather conditions. It’s up to Pathfinder Ryder and one of his twin children (you choose whether to play as the male or female) to find a way to survive these harsh conditions.

That plot description is a perfect analogue for Andromeda itself. Here’s a game that, after a lengthy period of development, deployed with a dizzying array of technical, game-crashing glitches and hostile design choices that make navigating the galaxy and inventory a chore. The game’s first mission hints at the “golden game” the developers set out to make. The addition of a jump-jet opens up new pathways through the bizarre ruins of the planet Habitat 7, a new scanning function fills in some of the blanks of a fatal first encounter with an alien species, and a massive terraforming engine provides the means with which to quell the planet’s never-ending lightning storm.

At this point, there’s a sense of immediacy to the exploration, but Andromeda loses that sense of purpose as it widens its scope. The following five planets you arrive at are simply too massive—and there’s a sense that, somewhere in development, BioWare ran out of content with which to fill all that space. Underneath the superficial differences—acidic pools on one planet, scalding heat on another—is a whole lot of boilerplate.

It’s a new galaxy but the same Mass Effect. Throughout the game, the promised freedoms are an illusion, buried under banal and scripted fetch quests. Planets are themed and objective-driven, which certainly makes them busier than the world of No Man’s Sky, but it also replaces the element of surprise with a sense of déjà vu. Instead of flying the Normandy to and from the Citadel space station, the Tempest now docks at the Nexus, and instead of the rogue AI Geth, there are the robotic Remnant. Andromeda doesn’t celebrate or explore the culture and diversity of the newly introduced Angarans, immediately shoehorning them into an agitating role, with the distrustful, extremist Roekaar faction picking up where Cerberus left off.

It’s not only in comparison to previous Mass Effect titles that Andromeda feels redundant, but also in its own formulaic gameplay. The planets might look different (you’ll slide along Voeld’s icy surface and skid down Eos’s irradiated canyons), but restoring each to a viable, non-toxic state boils down to finding and activating three monoliths and then solving some light Sudoku-like puzzles. Whether Ryder’s cutting a deal with water-smugglers on a Kadaran wind farm or competing with scavengers within the half-buried husk of an ancient Remnant ship in Elaaden’s desert, most missions simply require Ryder to drive somewhere, kill everything, and move on to the next waypoint.

It’s only after completing a half-dozen trope-filled tasks that players might get the opportunity of making a moral decision, such as whether to empower the ruthless pirate Outcasts over the shadowy, information-trading Collective. Sadly, beyond a few meaningless cameos from the people you chose to save during the game’s mission, if there are lasting consequences, they’ve been withheld for the inevitable sequel. In other words, Andromeda, which boasts over 50 hours of gameplay, is the world’s longest prologue.

The scenes that hold up are standalone vignettes that abandon the game’s open-world environments and rely far less on cover-based gunplay. These loyalty missions play to the strengths of the series: tough characters, moral quandaries, and alien locales. More importantly, they get straight to the point, whether you’re creeping around with a flashlight in the bowels of a Kett genetics lab, making a stealthy extraction from a booby-trapped mining prison on the low-gravity asteroid H-047c, or descending into and escaping from a reawakened volcano. Moreover, these are among the few places in which crewmates like Peebee and Vetra are shown as more than a reckless asari explorer or calculating turian mercenary, respectively.

The remainder of the game feels bloated to the point of inconsequence. Ryder’s encounter with the snake-like Architect, a creature so large that it must be chased from point to point in your party’s six-wheeled vehicle, is an epic battle. Or, at least, it would be if the exact same fight didn’t occur twice more. Even Ryder’s arsenal suffers from an overextension: There are dozens of weapons at your disposal, but many of them have barely discernable differences, especially after crafting modifications. At best, Andromeda is a pale shadow of its predecessors, one that, instead of boldly striking out into the unknown, merely imposes its most predictable habits onto it.

Review: Troll and I