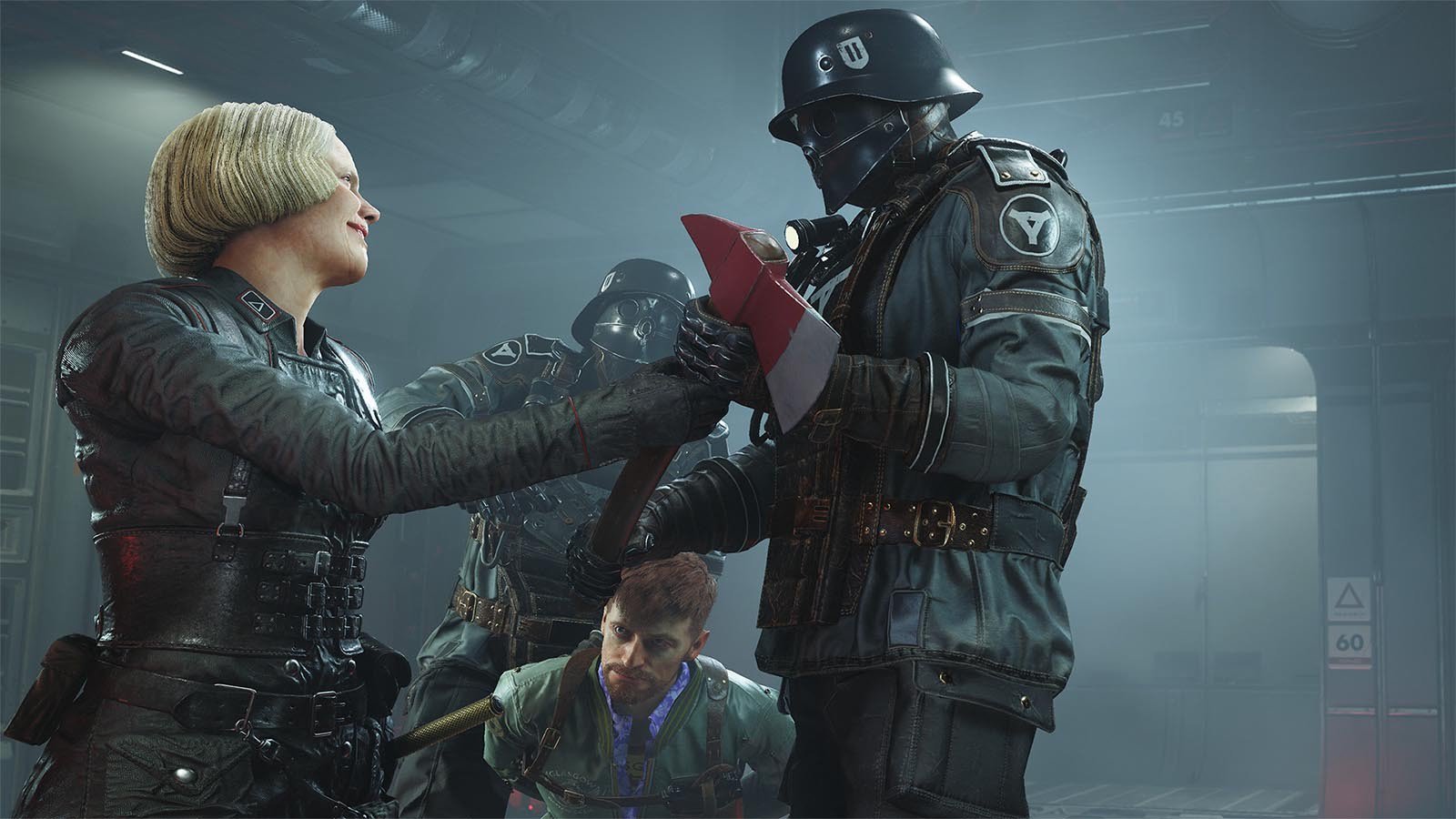 Set in an alternate 1961 America in which Nazis, victors of World War II, rule the planet, Wolfenstein II: The New Colossus wants the Nazi-killing theme of the blood-obsessed Wolfenstein series to assert its modern-day relevance in a world where the word “resistance” has become a rallying cry. The game’s story picks up right after the events of Wolfenstein: The New Order, which appeared to show a mortally wounded B.J. Blazkowicz. Fat chance, as the series’s longtime protagonist is revived and continues to carry out suicide missions as an unkillable human machine. While the game tries to complicate Blazkowicz by revealing, via flashbacks, that he’s the son of a Jewish mother and a racist Southerner, the blond-haired, blue-eyed, muscular, gun-wielding hunk fits the mythical image of the ideal American hero to a T.

Blazkowicz and his squad of revolutionaries from The New Order decide that they need to connect with other resistance groups in the United States in order to stand a better chance of defeating the world-dominating Nazis. Eventually, Blazkowicz and company join forces with Grace Walker, a character who’s right out of a blaxploitation film, given her afro, tough persona, and propensity for dialogue such as “You dig, man?” The New Colossus, in its assumed progressive glory, never explains how Grace’s fictional black-power faction in New York City could so blatantly recall a distinct cultural movement of the actual 1960s and 1970s. The Swedish-based MachineWorks’s evocation of blaxploitation iconography follows the lead of the James Bond film Live and Let Die, which condescendingly borrowed black-cinema tropes in order to achieve an appearance of hipness and social inclusivity.

Grace also marks The New Colossus’s intention to showcase women as powerful figures who impact history. Yet the game often reveals its clumsy pursuit of this valid objective. At one point in the campaign, Blazkowicz refers to Nazis as “monsters,” only for Grace to correct him: “Not monsters. Men.” The intent here is to acknowledge the bitter fact that genocidal murderers are still people, but this observation both flies in the face of the game’s cartoonish depictions of Hitler and Nazi leader Frau Irene Engel and puts the focus back on the male gender, even though, for example, Irene and her traitorous daughter, Sigrun, are women. In a later cutscene, Blazkowicz’s pregnant lover, Anya, guns down Nazis while her naked chest and stomach are exposed. It’s as if the developers at MachineGames think that their ostensible commitment to feminism won’t be agreeable to some of The New Colossus’s target audience without a dose of gratuitous nudity and Tarantino-level shock value.

In the game’s most patronizing line, Blazkowicz, parroting Grace’s white husband, yells at some invading Nazis, “You white-ass fascist Nazi pigs.” This scene unintentionally parodies the tendency of some white liberals to characterize themselves as honorary people of color. Perhaps The New Colossus somewhat accounts for this irony by sending Blazkowicz back to the South to confront his asshole father. But this conflict leads to another Nazi capture of Blazkowicz, which means it’s another excuse to show how resilient he is to impending doom. The game can’t decide whether it wants to point a finger at the evil of whiteness or prop up the superiority of the typical white hero amid trendy allusions to multicultural solidarity.

When it comes down to it, Blazkowicz’s image and dubious endurance are familiar forces within the first-person-shooter genre. For an illusion of sophistication, the game presents Blazkowicz as a fountain of Malickian inner musings, as when he whispers for guidance from a deceased leader of the resistance, “Can you lend me your wings?” But such dialogue is forced at best and risible at worst when it’s sandwiched between myriad sequences of by-the-numbers shoot-’em-up violence. Never mind that the influence of Malick’s sense of existential fatalism doesn’t hold much water in a game where the main character improbably avoids his demise multiple times.

At least one aspect of the gameplay in The New Colossus inadvertently confirms the feeling that Blazkowicz is nothing but a shell of a person. Due to the lack of audiovisual cues—such as a screen flash or a loud grunt from the protagonist—it’s at times seemingly impossible for the player to notice when an enemy shoots Blazkowicz in the midst of a firefight. In one way, such poor hit detection registers as an unfair annoyance, especially when you compare this game’s action to that of other first-person shooters. In another way, this irritating limitation illustrates what Blazkowicz amounts to: a white behemoth of a man, an overly quaint and comfortable American ideal.