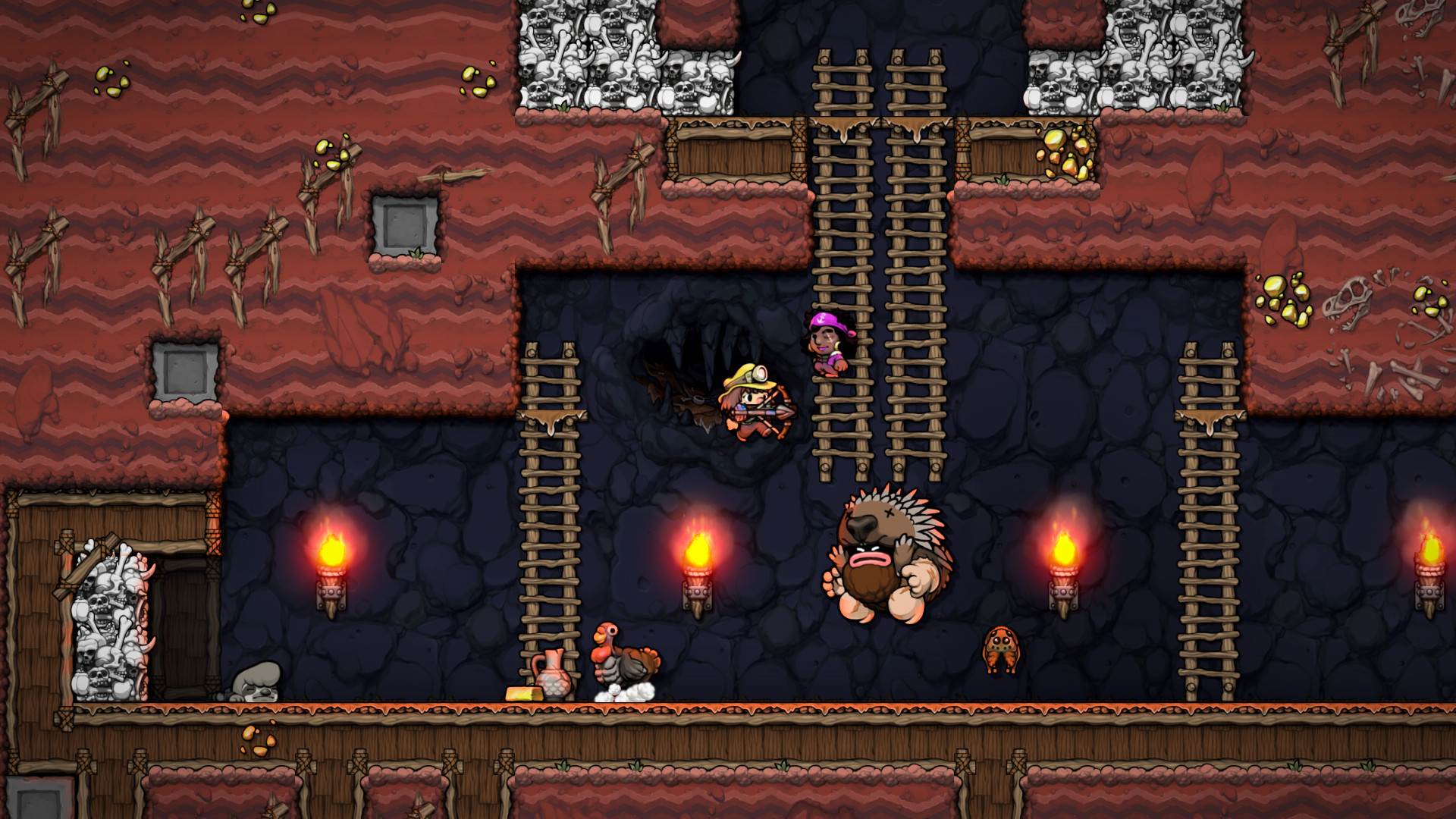 Right down to the start menu, Spelunky’s modus operandi has changed little for its long-awaited sequel. Once more, you take your whip, bombs, and ropes for a precarious two-dimensional descent through pits littered with cartoon critters. Again, white text proclaims, “The walls are shifting,” before the start of each completion attempt—that the levels are randomized and re-rerandomized each time you die. And you will die a lot.

The first world’s brown and rocky caveman dwelling, though populated by a few new enemies and obstacles, is reminiscent of the original’s opening mines. Still, you will spot tweaks to the familiar Spelunky formula early on. They seem small at first, like how the end of the first world presents a choice to enter either a jungle or a volcano, letting you pick the next set of obstacles that will probably kill you. Creatures like wild turkeys roam certain levels, able to be ridden and then lost (or abandoned) in times of distress like a Yoshi from Super Mario World.

The design of Spelunky 2 is so tightly wound and meticulously considered, though, that what seem like small tweaks and additions have wide, reverberating effects on the way the game plays. Nothing is immune to the environment and the objects within it, with bombs disastrously bounced away by punching-bag traps or pebbles you’ve tossed in the air coming back down to hit you in the face and stun you if you’re not careful. Trigger the giant drill at your own peril, because in the process of carving out a shortcut it might burrow down through pools of flowing lava, the domain of the volatile shopkeeper, or the bloody altar to a fickle god.

The turkeys, for one, provide a boost to mobility with a double-jump and a glide, though their headbutt differs just enough from your whip to be a liability until you get used to it. The turkeys can be carried up latters, and they can shield you from damage as long as they’re alive, giving out a health item when they’re blown up or otherwise set ablaze at the cost of losing the carcass as a throwable object to hit enemies or trigger traps. You can also give away the birds to a man in exchange for treasure, but take care not to blow up his pen, steal his turkeys, or kill the birds when he’s nearby if you don’t want to run afoul of his itchy trigger finger.

And while these tweaks hugely affect the game on a moment-to-moment basis, the larger structure of Spelunky remains intact here. Secret areas are abundant, and there are still unlockable shortcuts, but Spelunky 2’s similarity to its predecessor now functions as a sort of rebuttal to the various games that have followed the original’s procedurally generated permadeath lead over the last eight years. Where those other games lay breadcrumbs of progress to soften the impact of repeated failure and ensure every attempt feels meaningful, Spelunky 2 still rewards you only with scant knowledge through lessons learned the hard way. You don’t accumulate gold to upgrade your ropes or your whip or your jump height, and though you can unlock new characters, none of them play any differently.

Spelunky 2 remains staunchly committed to its immaculate core design, demanding that we adapt to its rhythms and its secrets. In this way, the game argues for the importance of that finely tuned core over the adornments of incremental progress, the various carrots on various sticks that inundate the entire medium. Such a firm declaration feels appropriate for a game whose very existence began with skepticism, where we questioned the point of more Spelunky when the original, after all, was polished to a mirror shine. Spelunky 2 may only change the size and shape of that mirror in subtle ways, but the things it allows us to glimpse about perseverance and tight, considered design are perhaps more vital than ever before.

The game was reviewed using a review code provided by Mossmouth.

Review: Ikenfell Has a Narrative that Considerably Out-Charms Its Combat