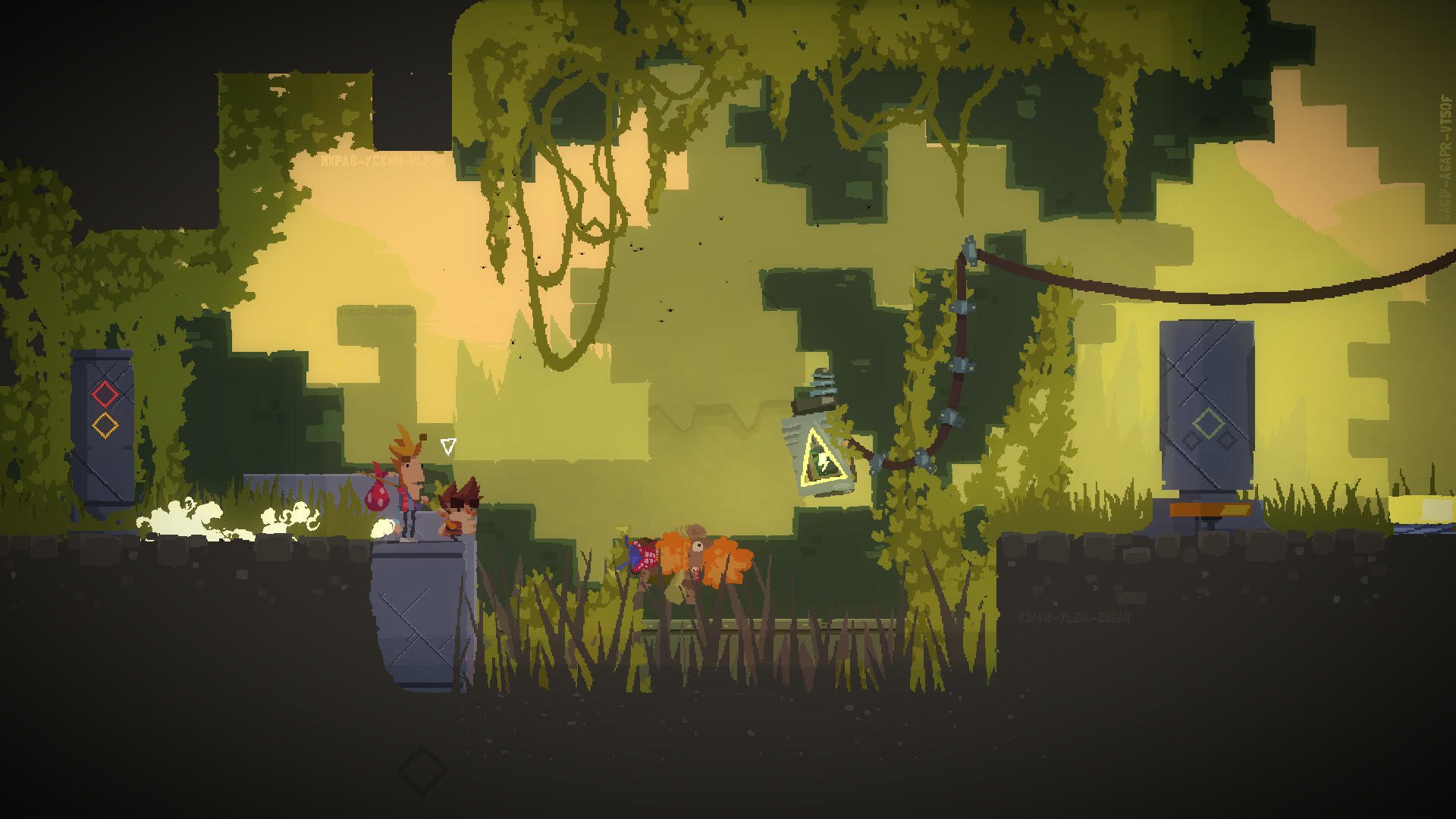 “Why play only one genre of game when you could be playing two slightly different ones at the same time?” That’s a somewhat misleading tagline for Lair of the Clockwork God, as you never simultaneously control the game’s self-aware protagonists, Dan and Ben. Rather, you swap between them, as well as control schemes.

Dan is a platformer enthusiast who refuses to interact with objects, while Ben is a stubborn LucasArts point-and-click adventure junkie who doesn’t care to jump. Figuring out how to use the skills we associate with their favorite genres of game to navigate through a Peruvian jungle, apocalyptic London, and an alien spaceship results in a game that’s fresher and more innovative than yet another standalone platformer or adventure game would be. Lair of the Clockwork God is an exciting way for creators Dan Marshall and Ben Ward to not only set it apart from their prior Dan and Ben titles (Ben There, Dan That and Time Gentlemen, Please), but to successfully extend their lovingly parodic style to a much broader range of genres.

The game is a gold mine of comic scenarios in which the fictionalized, fourth-wall-breaking duo at its center solves novel puzzles using an intentionally haphazard control scheme. Dan’s refusal to interact with even basic objects like a light switch results in gloriously convoluted workarounds, like the one where Ben must find a way not only to reactivate a drone, but to somehow make it glow in the dark. As the game points out, Ben is essentially Dan’s platforming gimmick; instead of Dan having to seek out skill upgrades, Ben combines items from his inventory into accessories that allow Dan to double-jump or hang from walls. Lair of the Clockwork God’s hybridization of platformer and adventure conventions is more than just a successful approach to everything that Ron Gilbert was trying to do with 2013’s The Cave; it’s also a simultaneous homage and critique of the conventions of various genres, with the two protagonists mercilessly commenting on how games have evolved—or not.

Lair of the Clockwork God’s central conceit is that Dan and Ben must teach a faulty A.I. how to re-empathize with humanity. They do so by entering “constructs” (self-contained levels) that represent feelings like Grief or Fear, and each area is “beaten” once the duo has done enough to sufficiently model that emotion to the game’s titular god. This focused, vignette-like structure also allows Marshall and Ward to quickly bounce between concepts, the result of which is a game that pokes fun at everything from visual novels to virtual reality, with plenty of righteous indignation left over for walking simulators and monetization options.

Ironically, the one thing Lair of the Clockwork God doesn’t have much to say about is other platforming games. One of the 11 constructs, Anger, does a fine job of channeling through Dan the sort of curse-spewing, controller-flinging rage that those who’ve played masocore games like Super Meat Boy will instantly relate to. The rest of Dan’s platforming sections feel secondary to Ben’s adventuring. Whereas the inventory puzzles are given new life by Ben’s outsized attempts to puzzle his way past obstacles that Dan can simply jump over, Dan’s largely dialogue-free acrobatics feel like the interstitial stuff you have to complete to get to the next clever puzzle or bracing joke. Dan’s the straight man who sets up the jokes, as when he mantles over some ledges so that he can pop the balloon holding up a dead clown aloft. But it’s Ben who lands the comedy of those moments; his ability to Look at objects or to Use items on them provides the literal observational wit and shock humor needed to push these scenes over the edge: “I feel like pissing on a clown’s entrails wouldn’t be funny somehow.”

Everywhere else, though, Lair of the Clockwork God has plenty to say, with each new area finding a clever way to demonstrate a particular emotion. Joy, for instance, manifests for Dan as a Sonic-like Green Hills Zone filled with floating beer caps and frothy alcohol waterfalls for him to run and jump through. By contrast, Ben’s never happier than when he sets about dismantling the bureaucracy that governs the way a platformer respawns upon death.

Regardless of whether you share Ben and Dan’s nostalgia, their emotions are infectious. The scenarios they face are absurdly over the top, but their actual responses are all too relatable. Most remarkably, however, is that the game can troll players with levels like Confusion and Disappointment and lull them into thinking that Hope is nothing more than a stinging punchline, only to at the last minute show up to the table with the unexpected sincerity of Regret. As it turns out, Lair of the Clockwork God is less about teaching an A.I. what it means to be human than about providing players with examples of how to be better people.

The game was reviewed using a review code provided by Size Five Games.

Review: In Wide Ocean Big Jacket, the Magic Is in the Smallest of Details