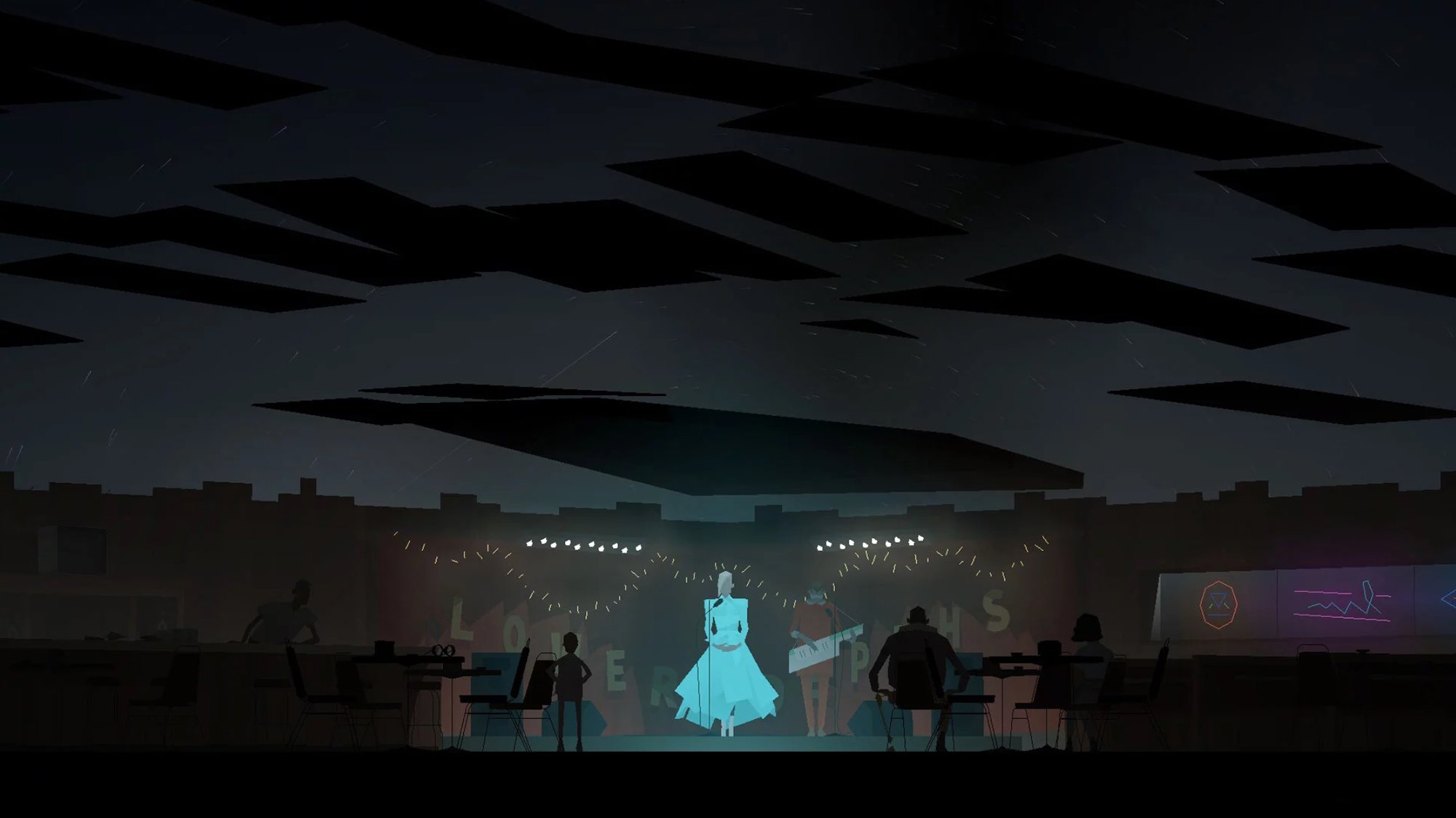 Had Kentucky Route Zero been released for the first time this year, it would have been easy to mistake its concerns for being entirely contemporary. When we talk about recent art that addresses the many injustices of capitalism and widespread disenfranchisement, there’s a tendency to frame such discussion in the context of the 2016 election. Rising discontent, widening income gaps, and chosen ignorance in the face of ecological devastation have further popularized stories to voice our collective anger, usually with subtext about eating the rich or gazing upon the end of the world. The setting of the five-part episodic adventure game fits right into such an atmosphere of resentment: a ravaged, mysterious Rust Belt stripped for parts and left to rot, its people displaced and indebted yet doing their best to scrape by.

But this towering masterwork from the three-man development team of Cardboard Computer stretches back further, taking a much longer view of things past than what might simply be described as “post-Trump.” Though the first part, Act One, came out in 2013, the game’s weariness and outrage extend beyond even the late-2000s financial crisis that inspired it, cutting to the very bones of moral compromise that make up the United States. Kentucky Route Zero is about America in a way that few games aspire to be and fewer still succeed at, as its deceptively quiet story gives way to something odd, sad, and brimming with humanity.

Though the game begins with Conway, an old man who drives a sputtering delivery truck for a floundering antique store, the cast gradually expands with each act. Shannon Márquez repairs old television sets in the back of a bait and tackle shop and is the cousin of the enigmatic Weaver, who tends to appear and disappear through pirate TV signals. Ezra, introduced in Act Two, is a boy who lives with a giant eagle in the Museum of Dwellings, a housing display over a razed neighborhood. First seen in Act Three, Junebug is a robotic musician in punk attire, originally designed to clear the old mine but now making her own way and her own sense of self alongside Johnny, another mechanical worker. To some degree, you control all of them, moving them around the screen in different scenes, but mainly you choose their dialogue and decisions.

Spilling out in a script-like format and typeface, the words of Kentucky Route Zero are numerous, the majority of the game predicated simply on talking to people and visiting dreamlike places. Though it superficially resembles a point-and-click adventure game, there aren’t really any puzzles, just choices to navigate the locations and the dialogue paths. A few of the choices matter, though most are flavor; for one, Conway’s dog can be a male Homer, a female Blue, or have no designated name and gender. Mainly, you pick the direction of conversations, defining what the characters might say and what they fixate on, who speaks and who stays quiet as the other choices often melt away, the dialogue having flowed in one direction instead of another.

This is, then, a game that asks you to inhabit multiple perspectives rather than consider them from a fixed distance, absent the artifice of world-defining choices. You consider personalities and states of mind, discovering the characters through half-remembered snippets of stories and the way they speak to each other, the way they think, the way they interact with the world. The game develops its own unique rhythms of easygoing movement and gradual exploration, a gorgeous synthesis of sound, image, and text that gets to the heart of how it feels to be out in the night air, to inhabit space along country roads and woods and fields. This is a twilight drive made physical, evoking the imagery of abandoned places and husks of human habitation often only through the words of characters who speak in the over-sharing cadence of the lonely and lost.

Here, you don’t poke around for collectibles or experience so much as a general sense of discovery, the urge to take your time and drive through the darkness for the simple sake of finding weird, pretty scenes dense with metaphor. One of the most impressive things about the game is how it has evolved, growing more ambitious from one act to the next while remaining remarkably cohesive. Later acts switch up camera angles and dialogue presentation without uprooting what’s come before, without diluting its power; some of the most affecting moments are still the early ones that eschew the simplistic graphical style entirely, leaving you only with the text interface and the brilliant sound design of ethereal music, chirping bugs, and dripping water.

Kentucky Route Zero is a game often content to remain as mysterious as its namesake, an underground highway seemingly unbound by physical laws. Any fights, between unions and predatory companies, have already happened or doubtless will happen again. Instead, it explores the aftermath of cultural devastation, of how people survive in the ruins of the American experiment and how they build atop (or beneath) that wreckage, with the strange reality meant to represent what capitalism has done to the world. The magic is there, only contained and warped by the society that has grown around it.

The characters’ paths narrow as the game continues, as the fist of an unfeeling system closes and people are overwhelmed by weaknesses; you drift from the role of driver to the person being driven to a simple observer of what’s to come. The people you encounter are refugees of greed and exploitation and obsolescence, and there’s a sliver of hope as they defiantly continue, finding pleasure in creation and companionship. They write, they compose, they perform, and they record, inspired by past struggles and a world content to forget its own history beyond facile preservation attempts in arbitrary little museums. After seven years, this visionary masterpiece concludes, an impressionist portrait of people doing what they can in a world that will never recover.

Review: Reality TV Strikes Back in the Darkly Satirical Ministry of Broadcast