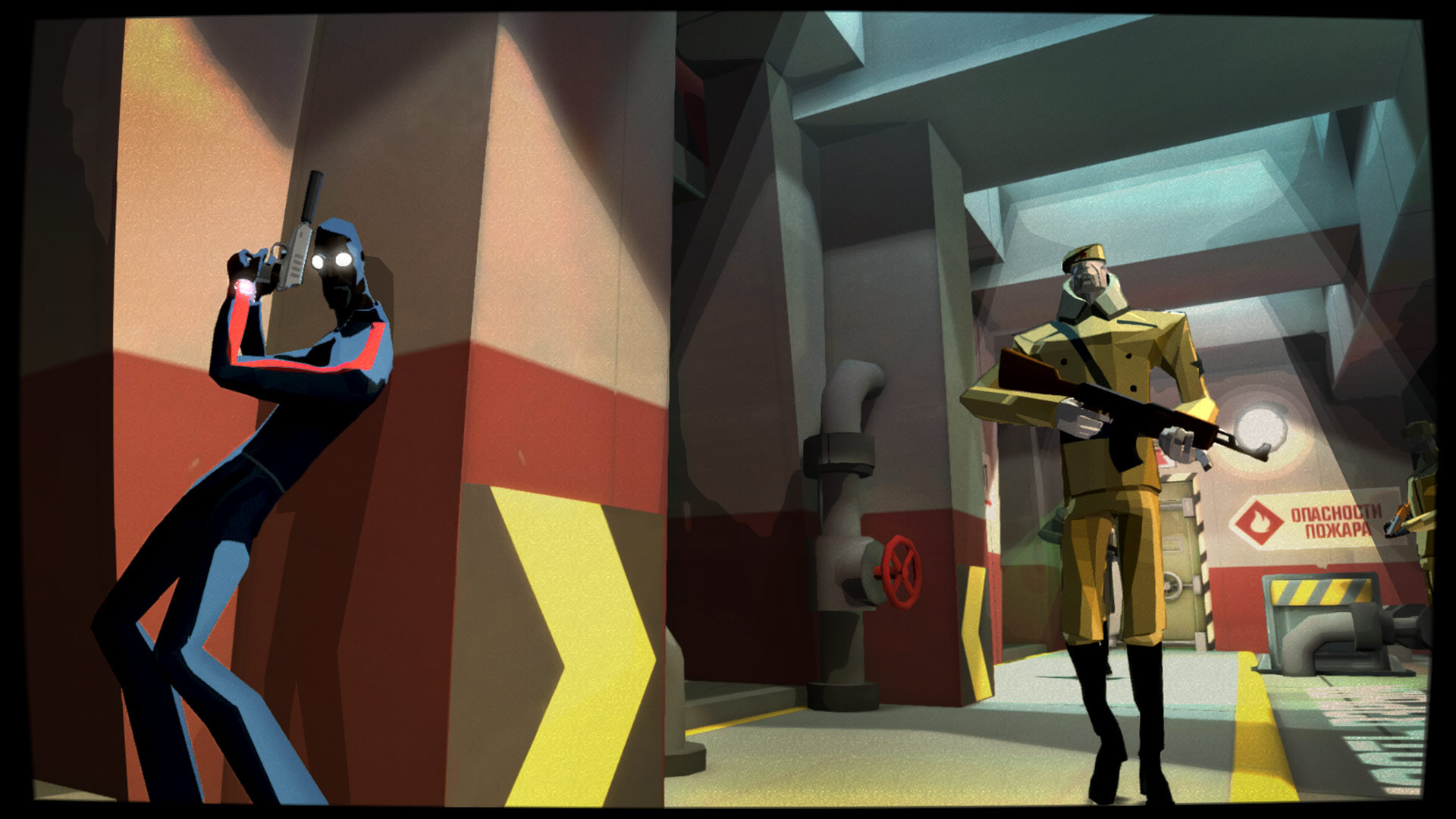 Everybody wants to be as cool as James Bond. But while CounterSpy looks the part, thanks to a suave retro-themed aesthetic, it feels all wrong. Because the game focuses on loose, randomized stealth sequences, there isn’t a single elaborate or cinematic set piece, and instead of explosive action, there’s just a lot of repetitive, mindless killing. The name of the game should be “The Procedural World Is Not Enough.”

For one, there’s no sense of urgency to the game. Although your goal for the rogue, independent C.O.U.N.T.E.R. agency is to infiltrate imperialist (U.S.) and socialist (U.S.S.R.) bases, collecting the secret plans that will allow you to seize control of their nuclear arsenals, you can take as many days (i.e., levels) as needed to do so. There’s no real risk/reward between the imperialist and socialist missions, and only if you accidentally lower the faction’s DEFCON rating to zero—getting spotted by cameras, killed by guards, or making too much suspicious noise—does a countdown timer begin. (Even in that worst-case scenario, it’ll reset to one at the end of the level and can be easily raised higher with the Persuasion skill.)

Secondly, there’s no real scale or scope to the game. You’re always infiltrating the same bases (only the floor plans are procedurally randomized each time, so expect to see the same submarine bay fairly frequently) and stealing the same plans; you never have to, say, escape these bases, deal with sabotage, or handle a chaotic element. The closest you’ll come to dealing with a rival is in the way the game challenges you to beat the score of another player—hermetically, at your own pace.

Third, despite the setting’s dead-on propaganda-poster aesthetics, your titular spy never gets any gadgets with which to navigate these levels. No grappling hooks or jetpacks, no smoke bombs or lasers. The guns don’t need to be as gimmicky as those from Ratchet & Clank, but a tranquilizer gun shouldn’t be the most interesting device you earn. (Forgive the pun, but that’s a bit sleepy.)

Finally, 2D stealth platforming doesn’t go all that well with a randomly generated map: Too often it leads to unfair corridors that are packed full of enemies that are impossible to sneak past, and an explosive barrel is never there when you need on. You can’t pan the camera around to plan your path, off-screen enemies are only occasionally indicated with pointer icons, and you can only reliably see/snipe in front of you while hiding behind cover (at which point the perspective shifts to an over-the-shoulder one). Despite the smooth controls and unambiguous cel-shaded design, the actual gameplay never feels as proficient as that of, say, Mark of the Ninja, in which every death lies solely at your feet.

Ironically, many of these issues are only a factor if you take CounterSpy up on its offer to play forever. The initial two-hour campaign is stuffed with hidden collectable items (weapon blueprints and stat-boosting formulas) and each day both increases the complexity of the corresponding level and fills it with increasingly well-armored (and armed) guards. But once you’ve earned these persistent upgrades, there’s no longer any need to explore, and traversing each zone becomes a linear left-to-right affair. The Advanced difficulty (and I imagine the same goes for Expert mode) is little more than a retread, only with less money to spend fooling around with your loadout. All the slick accomplishment that comes from chaining together a series of stealth kills evaporates once every enemy appears to be wearing a headshot-preventing helmet, replaced by the fatigue of incorrectly guessing whether an enemy can see you strangle his buddy from all the way across the room.

CounterSpy just doesn’t have enough content to sustain its initial premise. Give it too much time and attention and it’ll bore the living daylights out of you.

CounterSpy is now available on the Sony Entertainment Network Store for the PS4, PS3, and PS Vita.