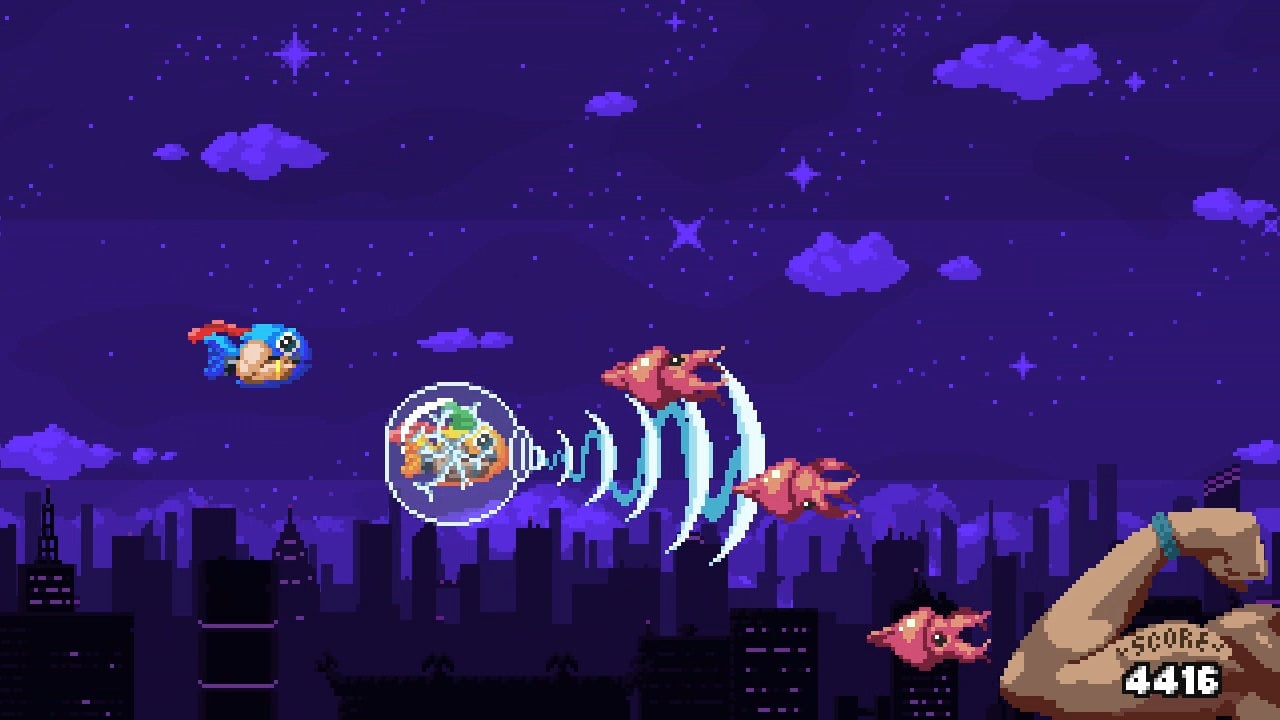 Developer Neon Deity Games’s Shutshimi: Seriously Swole is one of the best shooters since the turn of the century. Its spirited rejection of video-game balance almost qualifies as avant garde, but Shutshimi’s emphasis on high scores begs for comparisons to great arcade fare such as Galaga, Xevious, TwinBee, and Fantasy Zone. Like each of those shoot-’em-up classics, Shutshimi has a distinct rhythm and personality to its (on-the-surface) mindless violence.

Despite the connection to traditional gaming, Shutshimi isn’t consumed by the trivial nostalgia of old-school wannabes like Shovel Knight and Axiom Verge. Rather than base a significant portion of its appeal on retro sentimentality, Shutshimi makes its rules—not another game’s—the attraction, exuding a pride for personal expression. The game undoubtedly owes something to the muscle-flexing, horizontally scrolling Cho Aniki, yet the latter tries to coast on silliness and homoeroticism with little compelling action. In contrast, Neon Deity’s gymnastic design demands to be taken seriously as an e-sport while fulfilling the absurd premise of a gold fish with human arms defending his home.

Shutshimi alternates between 10-second spurts of shooting and 10-second scrambles through tutorial drivel. During the latter, you’re forced to select from one of three items before flying and firing for another round. The fact that you must choose eradicates any hope of a completely comfortable playing style, and the rambling descriptions make the ordeal that much more frenzied (and humorous, though you often have zero time to laugh). Neon Deity’s madness runs deep: The items include expected power-ups (different weapons, a shield, little helpers), effects that can make your survival more or less difficult (inverted directional control, fewer enemies), and other bizarre ramifications (“party vision” complete with strobes, all enemies as butts, a cycle that makes you involuntarily scroll through every weapon in the middle of action). The game clearly attempts to thwart any traditional notion of fairness despite its intention to encourage high-score competition. This contradiction isn’t mere entertainment; it’s daring and remarkable in a world where wild chance has its approved places (e.g., party games) and cravings for game balance all but mandate predictability.

You could imagine Shutshimi being rejected by “serious” players, especially overly analytical ones. Or maybe they would laugh at Neon Deity’s parody of masculine resistance in the cigar-smoking protagonist. Still, there’s a fundamental seriousness to the game: When one becomes familiar with the assorted bonuses and hindrances, strategies will emerge and adaptation must occur as the screen fills with unholy animals. Similar to the arcade masterpieces, this cartoon is no joke.