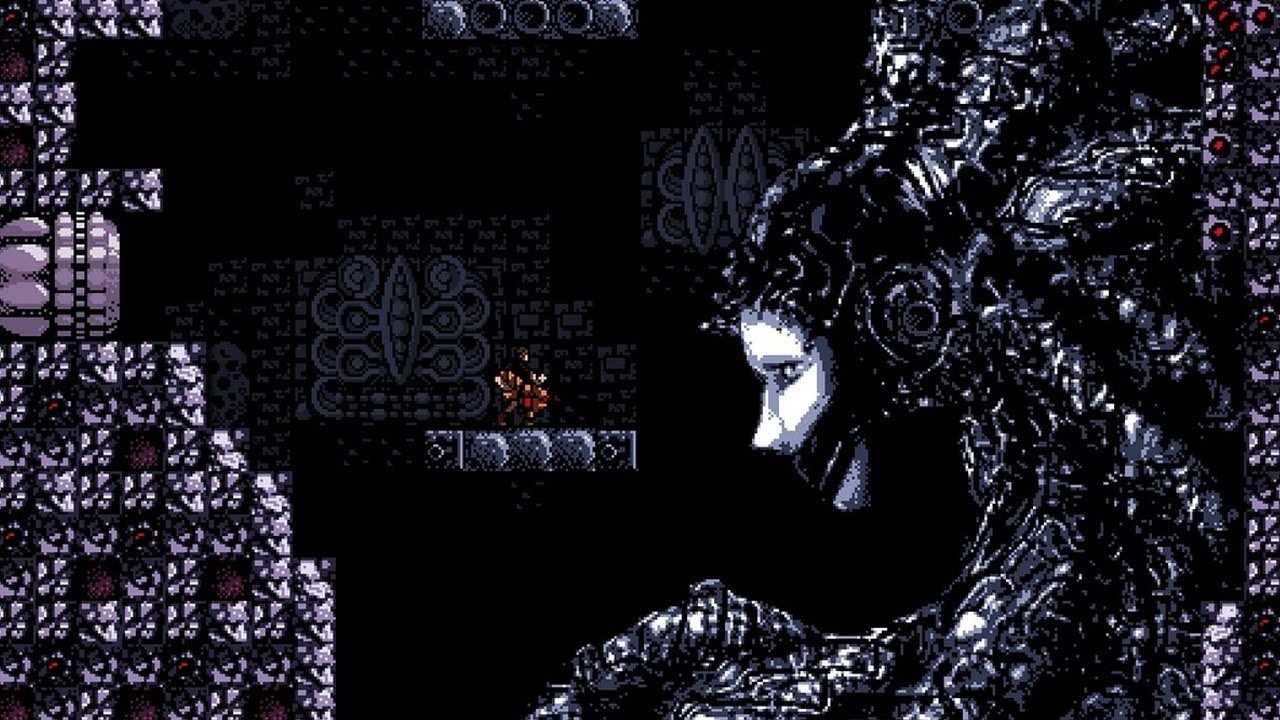 Though the gun acquired early on in Axiom Verge is literally a disruptive technology, able to hack into enemy and environmental code, flipping it to a new binary state, the game itself is more of a sustaining innovation, revisiting and improving on the legacy of its Metroidvania-type predecessors. In fact, the idea of “breaking” the game is a nod to the way that players currently revisit Super Metroid, looking to find time-saving shortcuts, and there’s even a “speedrun” option available on the main menu that removes cutscenes. Of course, the game can be completed normally, too, and this is the recommended mode for casual and hardcore gamers alike. The deceptively twisted story is as worthy of a player’s attention as the overtly labyrinthine map, and agonizing over whether to believe Athetos, who’s cast as the game’s villain, or Rusalki like Elsenova and Ophelia—a collective of AI which oversees the infected, deadly planet of Sudra—gives players something to do while wandering about.

For the most part, the solo developer Tom Happ uses nostalgia well. Each of the seven main bosses is particularly susceptible to a different weapon, like the multi-directional Hypo Atomizer’s ability to get underneath the Gir-Tab’s armor, which brings Mega Man to mind. Each foe also gets stronger as they take damage throughout the battle, varying up their attack patterns, which makes a nice challenge for fans of, say, Contra. Some weapons also double as tools that help to solve puzzles, whether it’s the grapple (Bionic Commando) or the Rygar-like tethered charge. Some of the dialogue is even deliberately awful, using the distinct alien syntax to miscommunicate lines like “But Athetos is win” with all the elegance of Zero Wing’s infamous “All your base are belong to us.”

A few of Happ’s choices, though, are unfortunately backward. The map shows players where they’ve been, but doesn’t suggest where they need to go, which can be irritating. This is especially true when coupled with the fact that it’s sometimes difficult to realize that an area can even be accessed with the available suite of skills, and the last two levels, the E-Kur-Mah temple and the Mar-Uru laboratory, rely on a player’s mastery of pairing together two separate abilities: the short-range teleport and the remote drone. The search for upgrades offers enough incentive to scrounge around for secrets without Happ forcing players to stumblingly backtrack in search of the next area. Likewise, a passcode device allows players to find additional secrets, but while a player might notice, say, that a certain hacked enemy flashes a 12-letter sequence, the lack of any confirmation that the code worked actually discourages experimentation.

Overall, Axiom Verge’s design stands out, particularly when it fiendishly deviates from the expected. Special randomized, hidden areas exaggerate the idea of there being corrupted data, with distorting colors and dead pixels harkening back to the days of semi-playable arcade kill screens. The atmosphere also has its share of creepiness, with the exotic biomes filled with bubbles and steam giving way to the intelligently designed living spaces, and the giant, heaping piles of bodies found within. The game’s best moment is also its creepiest, as in one sequence, arms begin to sprout from the floor, faces in the walls start to scream, and the entire screen pulsates and throbs almost on beat to the music. There’s an exciting sense of frisson that comes when the player is left unsure as to what exactly is happening. Or, to put it another way: “If it ain’t broke, break it.”