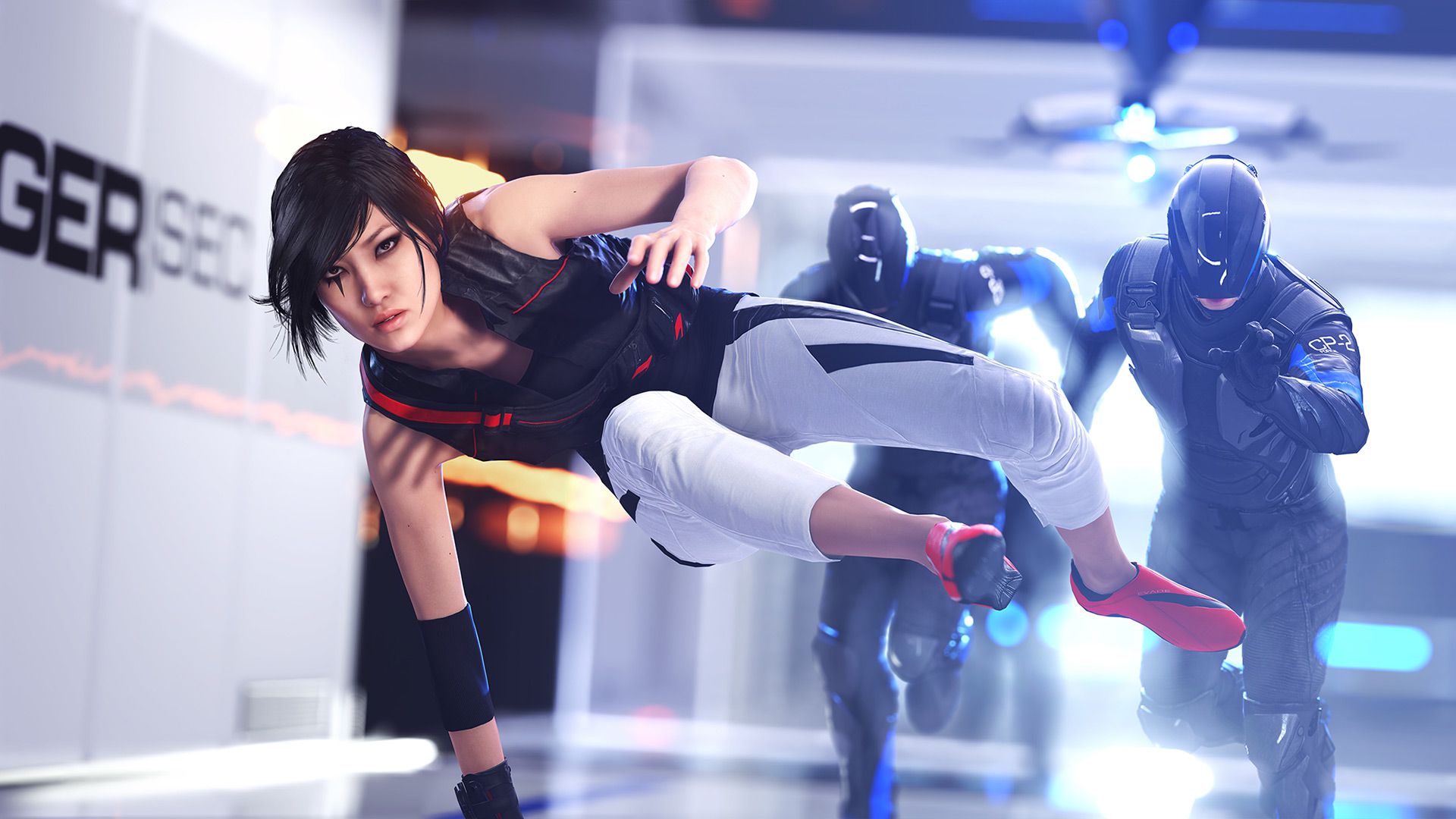 Runners know that there’s a big difference between a 100-meter dash and a marathon. You can go all out during the former and burn brightly over a short period of time, as did the original Mirror’s Edge, but the latter requires a steadier sense of pacing and drive. Mirror’s Edge Catalyst has moments of greatness, but its overall conditioning buckles under the strain of the many repetitious tasks crammed into the open-world city of Glass. Even those who make liberal use of the unlockable fast-travel points and skip the optional content will find that Catalyst drags outside of its major set-piece missions.

Faith is supposedly an exceptional Runner, and yet she spends the first half of the game idling around Glass’s austere rooftops, skyscraper canyons, gaudy terraces, and rat-scampering slums, grinding experience from shiny collectible gridLinks in order to upgrade her traversal skills. This extends far beyond a mere tutorial for those unaccustomed to first-person parkour, in which spring-boarding off a fence in order to get better height on a wall you’re attempting to run across is just one of many momentum-gathering tricks. Instead, players are teased with dozens of challenges that are impossible to perfect until gaining late-game upgrades (like a grappling hook), a waste of time equivalent to putting Olympic medalist Usain Bolt in a molasses-coated hamster wheel.

Catalyst treats many of these side missions like work, all but turning Faith into the sort of mindless Employ of the dystopic oligarchy she’s fighting, a group that plans to use nanobots to emotionally manipulate loCaste workers and distract them from their tedious lives. While the game’s emphasis remains on free-running through a first-person environment, too many of the repetitive delivery routes boil down to following in the footsteps of a holographic “ghost” generated by Faith’s Runner Vision. Rather than distract from the game’s weaker narrative points, then, these blander tasks emphasize them.

For every well-scripted run through a construction site defended by hidden turrets or the daring ascent of a debris-filled elevator shaft, there are a dozen meaningless speed bumps. The timed requests of Faith’s teenaged hacker friend, Plastic, for “metadata” help to elevate what’s essentially the localized collection of gridLinks, but because these challenging side quests don’t even remotely pertain to the story, they only trip up the game’s overall momentum. Even the hidden, plot-expanding audio files and documents are anathematically presented by the game: one more thing slowing players down.

The only sort of pause that works in Catalyst’s favor is one that ultimately speeds things up. The parkour puzzles of the Grid Nodes require players to carefully consider how best to navigate a columnar gauntlet of security lasers and haphazard server banks. Dashes, the game’s highlight, are rigorously timed sprints set within specific areas of the city. The fastest times in these asynchronous races can only be achieved by taking the less-traveled paths, chaining together moves to frantically shave milliseconds from your overall time. These courses rarely take longer than a minute to complete, but it’s not unusual to spend hours finding and stringing together the precise sequence of shortcuts and acrobatic antics necessary for a three-star rating.

Like a catalyst, the thing that precedes an event, both of these missions are fixated more on the journey than the destination. No wonder, then, that the story feels so sluggish. Free-running is a spontaneous act, and Catalyst’s levels are filled with delightfully frenetic surprises, from death-defying leaps off giant cranes to a chase through a collapsing building. By contrast, as if the story weren’t already hampered enough by being a prequel that fails to explore new terrain, the plot is so predictable that the momentum-killing cutscenes feel like punishments rather than rewards.

At its best, Catalyst is like a giant schoolyard playground, in which players can freely explore and make their own adventures. There are impromptu shortcuts all over the dense districts of Glass, from billboard support cables that double as zip lines to gaudy terraces that can be leapfrogged like stairs, and at any point outside of a mission, players can record their route and challenge others to outrun them. All too often, however, the game strips Faith of this freedom and her speed, forcing her into melee combat that’s awkward, repetitive, and bland. It’s an inexplicably stupid design choice that trips up the whole game. Real runners know better than to leave their shoes untied.