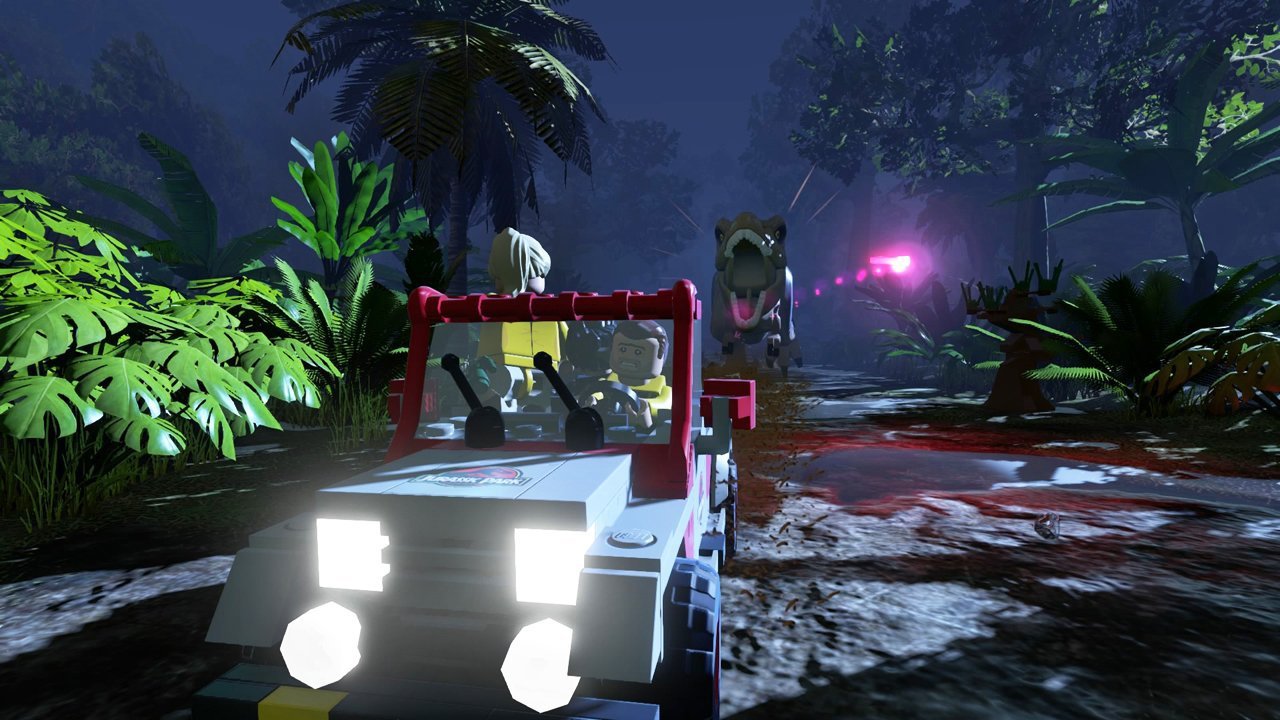 The framework for every Lego game hasn’t changed much since the days of Lego Star Wars. It honestly never has to, and Lego Jurassic Park isn’t the game they tried reinventing the wheel with in that regard. You run, jump, collect Lego studs, break stuff, telepathically put it back together, and solve obstacles with the new object. Lego Jurassic World does get a nice shot in the arm from the fact that just about every tertiary gameplay mechanic introduced in games past makes a well-implemented appearance in some form here (there’s even a version of Lego Harry Potter’s invisibility cloak), and the fact that you can actually wreak havoc playing as dinosaurs, albeit all too briefly in the game’s story mode. Otherwise, it’s pretty much lather, rinse, repeat. It’d be a serious problem if the formula wasn’t as unstoppably fun and versatile, even after all these years.

Most of the onus of quality is now on whatever license Traveller’s Tales has applied the formula to. With that in mind, their take on Jurassic Park’s dinosaur mayhem is joyous. While the relative thematic weight of the first film is thrown to the wayside, the transition of the series into the Lego games’ cartoon sensibilities means that the crazy spectacle of the sequels slips into its blocky, cartoon clothing like a glove. The games’ typical reliance on slapstick, background banter, and putting film dialogue in a hilarious new context has never been stronger in execution than it is here. The real challenge in transferring a series like Jurassic Park, however, is that Traveller’s Tales has to come up with a way to make the darker moments not just kid-friendly, but still just as entertaining to boot.

They succeed. The comedic lengths the game goes to make the series’s trademark wanton cruelty palatable is impressive. Dinosaurs don’t eat people, just the delicious sausages and hot dogs people seem to have on them at all times. If they do swallow someone, inevitably, the dino will be seen spitting them back out, covered in translucent Lego drool. Moments like the long grass sequence in Lost World will have someone screaming in terror that they’ve found an arm in the grass. That’s attached to a body. And the body’s alive. And still talks. And it’s not hurt. It helps when dealing with iconography as prescient and popular as Jurassic Park that can be recognizably subverted so easily, but the game does wonders with its fully invented moments of background humor. It does, however, speak volumes about how bland Jurassic Park III was that the game’s humor can’t save it from being the most boring section. It’s also worth mentioning some distractingly shoddy audio when the game splices in dialogue from the original trilogy. The Jurassic World segment is thankfully exempt, since the majority of the main cast recorded extra dialogue for the game, and Chris Pratt is clearly a darling of whoever’s on the other side of the recording booth, judging from how much more he gets to riff on his lines over the rest of the cast.

Lego Jurassic World isn’t the most ambitious entry in the long history of Lego titles; that honor might eventually belong to the upcoming Lego Dimensions. But there’s a noticeable extra dollop of love and care shown toward making these films work in a medium that’s had a strangely dicey time of things trying to make something as simple as “run away from all the dinosaurs to a John Williams score” work.