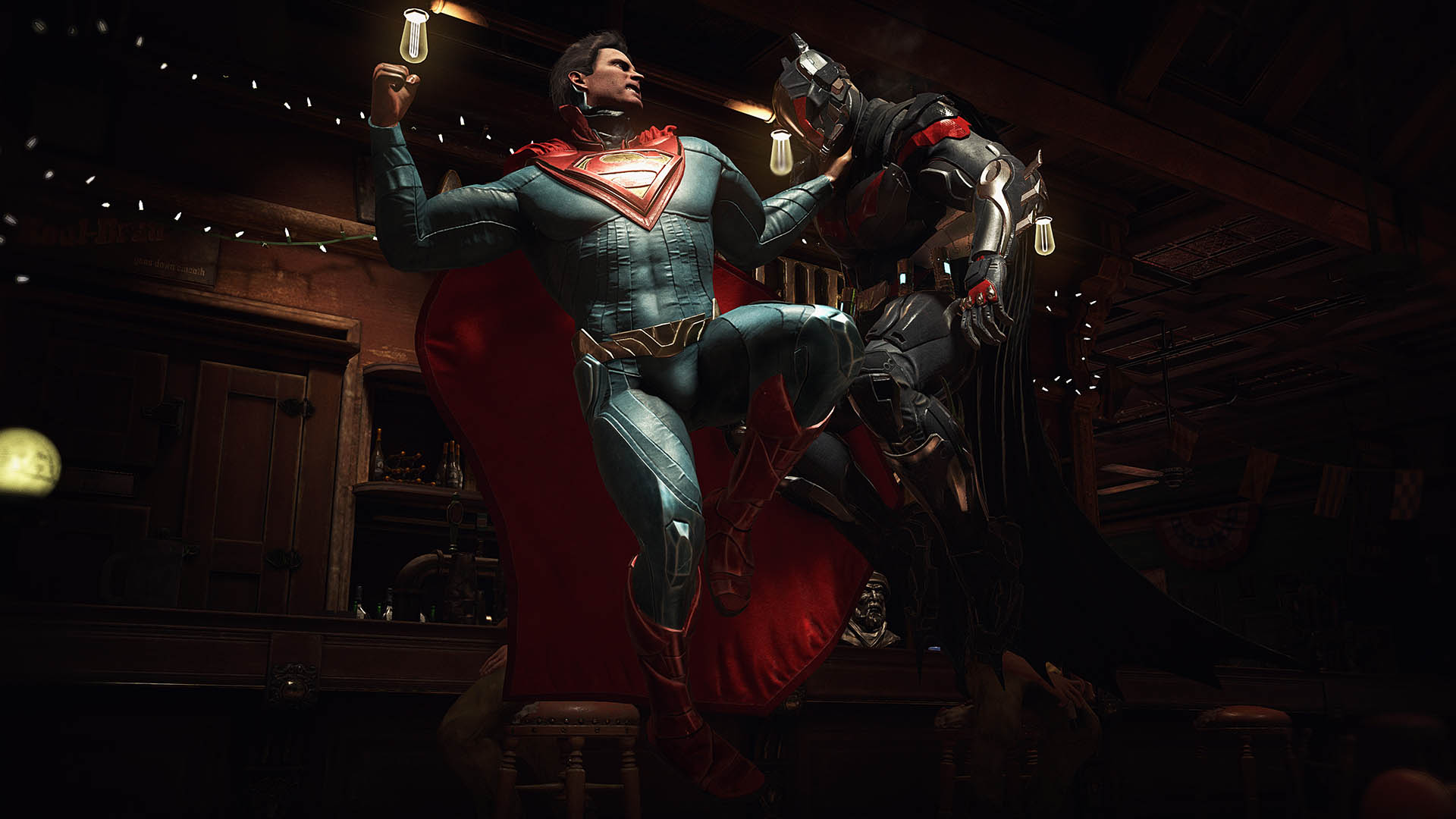 It’s hard for anything with the DC Comics logo slapped on it to escape the looming, bellicose shadow of the present-day DC Cinematic Universe. Indeed, Netherrealm Studios’s sequel to the sneering Injustice isn’t above frequent visual references to the morose house that film director Zack Snyder built. Injustice 2, however, seems aware of the toxicity of its predecessor’s misguided attempt at crafting a grim DC Universe, and seems vehement in its efforts to soften this tone. The austerity that ruled over Injustice’s narrative and gameplay has been largely shaken off, yielding a game that’s much more inviting to those who never wanted to see Superman as a grieving fascist.

To its detriment, Injustice 2 still has that, as the game’s Story Mode directly picks up where the previous game left off, with Superman in a prison uniform under a red Kryptonian sunlamp, serving his time for his role in trying to institute the Justice League as a worldwide superpowered oligarchy. The job of protecting the world falls primarily to Batman, Black Canary, Green Arrow, and a blessedly rehabilitated Harley Quinn. However, the group finds itself woefully outgunned when Brainiac (brilliantly and subtly voiced by Jeffrey Combs) shows up to collect Superman and all of the world’s major cities for his horrible menagerie, reducing all the galaxy’s life and accomplishments to pure data with the aid of a few choice second-string villains: Gorilla Grodd, Cheetah, Captain Cold, The Scarecrow, and Deadshot.

The majority of the Story Mode, then, is a tale of the heroes of the DC Universe trying to mend their professional damages from the first game. Each one is confronted with their mistakes, and after facing off against whoever they wronged in the past, the road is paved for them to heal their divides. Injustice 2’s most crucial victory is the joyousness with which it depicts its heroes doing the right thing simply for its own sake. Except, that is, for Superman, who’s still a one-dimensional autocrat here, self-seriously tortured by the weight of his duties and brimming with murderous rage. Even then, echoing the great tonal divide between the current cinematic and televised DC Universes, Supergirl ends up filling the void: a true paragon who feels for every innocent life, and wants nothing but to bring hope to the world.

Injustice 2 juggles a few big arguments about good and evil, but the timbre of those arguments falls squarely on the side of empathy. As a result, the game has far more freedom to act like every kid’s dream of superheroes and supervillains clashing than ideological relativism at war with itself every round. Special moves continue to overflow with personality, and Super moves still represent a grinning apex of comic-book ridiculousness. And the game’s mechanics follow suit: The fighting system once copies and pasted from 2011’s Mortal Kombat reboot has been sped up, its every aspect looser, faster, and far more friendly to player improvisation. Netherrealm Studios’s penchant for dial-a-combo methodical inputs now leaves room for enemies to escape and for staid special moves to be canceled and mixed in with far greater ease. It also now puts much more onus on players to manage their Super meter, which, when activated during jumps, dodges, combos, and specials, puts all sorts of twists on every little move the player can make. Injustice 2 expands the reach of the first game, bringing newfound depth as well as accessibility.

The game, though, hobbles itself through the introduction of a new RPG-style inventory system, which allows players to customize every character using loot items gained from playing the Story Mode and on- and offline matches, and, disappointingly, spending real money. It’s a feature that would’ve been mildly disappointing had it simply gone the route of Overwatch, a game that, until very recently, was infamously stingy with loot boxes that just offered aesthetic changes. Injustice 2 poisons the well by attaching stat increases/decreases to them, leeching the fun out of what could’ve simply let players make their own Crisis on Infinite Earths superhero variants, but instead turns costumes into a war of priorities: Do you want to win or do you want to look cool doing it? Because you can’t do both, especially for nonprofessional players taking the game online who will find themselves smacked silly by a mediocre opponent just because they found a cooler pair of super underwear than you did.

Still, much of Injustice 2’s pleasures can be experienced without running afoul of its annoyances. Between Story Mode and the Multiverse (Injustice 2’s take on the arcade mode), there are more than enough ways to simply jump in and start kicking the crap out of supervillains within minutes. Arguably, regardless of want, it’s all anyone needs from a video game about superheroes: the ability to make the good guys win, the bad guys lose, and at the same time look cool doing it. The fact that Injustice 2 doesn’t trip over its own shiny boots going above and beyond that simple goal makes it even mightier.