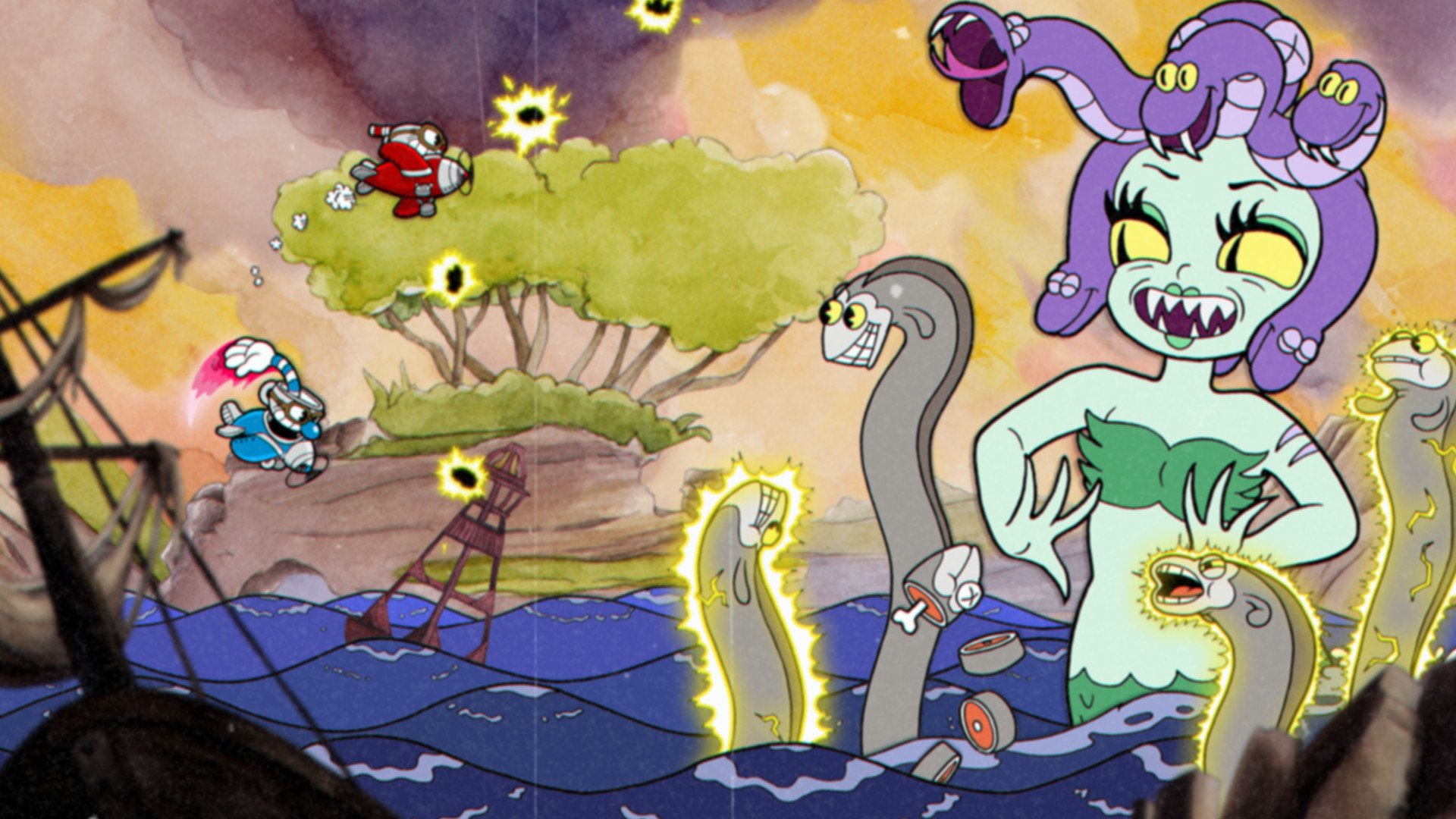 Cel animation remains a medium in critical condition, usually only dragged out of the closet for animators to say, “Boy, look how far we’ve come,” rather than to revel in it for its own sake—something that’s triply true for the hypervisual cartoon surreality of the 1930s. Cuphead, though, has no time for lip service. Hand-drawn over the course of four long years, Studio MDHR’s game is an arcane spell that raises Ub Iwerks and Max and Dave Fleischer from the dead to take over your screen with a psychotropic vengeance, right down to its glorious down-and-dirty ragtime score. Every stage is a crazed Silly Symphony short in and of itself, never missing a chance to take a single idea to its unhinged comedic extreme with a fluidity that seems almost alien compared to the computer animation that’s the norm today.

In the world of gaming, which has become friendlier to hand-drawn efforts, Cuphead represents a different kind of throwback. Beneath its wild aesthetic lurks the steel-hard, unforgiving soul of a run-and-gun shoot-’em-up, closer in kinship to Contra III and Gunstar Heroes than the titles in the Rayman series. In the same way that old cartoons were once made with adults in mind, with kid enjoyment as an incidental, Cuphead is a game that expects the best out of its players, with casual accessibility a grudging, compulsory concern.

The setup here is that Cuphead and his best friend, Mugman, wander far off from home, and wind up at a casino run by Mr. Die, a swing-dancing smooth operator with a six-sided die for a head. After a run of good luck at the craps table, the Devil himself winds up betting the pair for their souls. And it’s a bet that the pair loses. However, the Devil makes them a deal: They can clear their debt if they help him to collect the bounty on some other deadbeats who owe him a soul. And so, the duo takes off on a journey to fight a procession of multi-stage boss battles with the craziest rogue’s gallery ever assembled to serve souls up to Old Scratch.

The game’s mechanics are fairly simple: one button for jumping, one for shooting, one for dashing, and one for changing between two weapons for Cuphead’s finger gun. Every weapon has a powerful EX version that charges up as Cuphead deals out damage; there’s even a Super move contingent on Cuphead using his maximum EX charges in one shot. Along the way, you’ll get some help from a sundry store—run by a gruff, hilariously monosyllabic pig with an eyepatch—that grants access to various buffs and weapons.

Thankfully, Cuphead isn’t so much of a throwback as to torture players with limited lives, but it will become abundantly clear that all of that counts for squat the first time you face a boss. This isn’t a “breeze through on the first try” kind of game, but one of exploitable patterns that only become clear with time, repetition, and much death. Cuphead can take three hits—with a power-up available down the road granting a fourth at the expense of attack power—before he’s a goner. The game’s side-scrolling stages are short, with most taking about three minutes on average to beat, but there are no checkpoints, meaning that whether you’re 10 seconds into a stage or 10 seconds from finishing it, dying puts you back at square one. The game doesn’t demand absolute perfection, but survival means getting pretty close to it.

One, though, shouldn’t confuse Cuphead’s demands on player proficiency for cruelty. Every death is meant to teach you how to move, where to go, and what combination of weaponry and perks to bring to the party. Every tiny victory brings forth a twist to every stage, the next animated wonder to marvel and laugh at, and a new diabolically ingenious attack pattern to learn. Failure is hard in Cuphead, but seeing what success brings, the price paid is almost always worth it, with only the controller-breaking sadism of the final area inspiring anything less than respect for just how well the game doles out gratification.

There are a few flaws along the ways. Load times between the overworld map and the actual levels are a bit on the long side, and you can’t swap Cuphead’s equipment set without having to return to the overworld. Also, Cuphead has a parry move that allows him to bounce off of and destroy pink objects, but despite the name, there’s rarely advantages to its use aside from the fact that the end-of-stage grading system judges you on whether you used it a certain number of times on that level. And though the game does stellar work fitting into its aesthetic shoes, there are moments of spit-polished cleanliness, such as the score and voice samples, that clash with the game’s efforts to look grainy and deliberately degraded elsewhere.

These faults, though, aren’t enough to detract from the kind of awe-inspiring retro experience that Studio MDHR has created here: one that doesn’t just ape its influences but seeks to sit comfortably alongside them, making the audience a full participant in its merry mayhem.

The game was reviewed using a review code provided by Assembly.