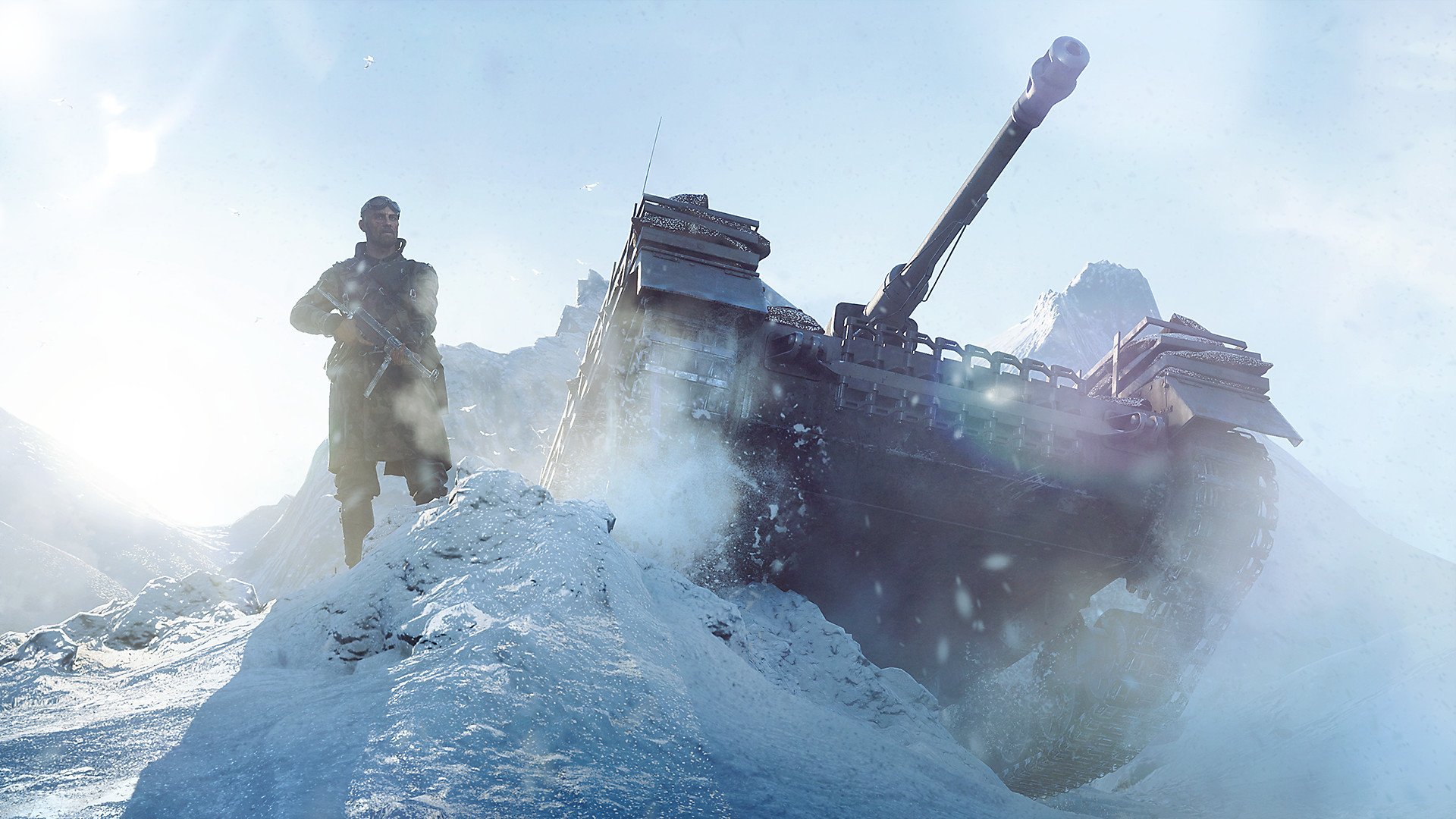 As a single-player experience, Battlefield V is a series of short vignettes that can’t hope to live up to the weight of its heavy-handed narration. Throughout its three War Stories, and especially in its prologue, the game treats death as a device with which to transition between fronts. Where Battlefield 1 grimly opened with a sequence that highlighted the names of each soldier who died in that level’s last stand, Battlefield V’s introduction settles for displaying the times and dates of each encounter.

First the game leaps from the perspective of a soldier being blown up by a tank in Norway in 1940 to that of a tank driver in Libya in 1941. Then, in skipping to the POV of a pilot flying for the RAF above the patchworked green countryside of Hamburg in 1943, Battlefield V has left the story of a sniper bombarded by a plane in Algeria’s Kasserine Pass in 1942 largely untold. That the game feels the need to underscore the point it’s making—“Death is death, no matter where you are”—suggests that Swedish video game developer EA DICE is unconfident in its ability to actually communicate this message.

By contrast, when EA DICE stops trying to tell a specific story and instead allows players to generate their own on the massive fronts of the game’s 32v32 multiplayer combat, Battlefield V reveals itself as an audacious, ambitious, and downright epic war simulator. As with the solo War Stories, the four Grand Operations—one of several PVP modes—each take place across three maps, but instead of recounting an individual’s tale, they tell the tale of each titular battlefield, such as the Libyan desert (Operation Battleaxe) or the wintery mountain environs of Norway. In the best example, which takes place in Rotterdam, players watch as, over the course of three separate encounters, the city falls to pieces. The final phase, aptly named “Devastation,” occurs after the Nazis’ bombing of the city on May 14, 1940, leaving the two armies to fight through streets still covered in white, smoky ash.

There’s a sameness to the individual War Stories (exacerbated by the poor AI), wherein players carry out largely identical objectives. As a reformed British criminal, you must attempt to prove your worth by making a last stand against the Germans in North Africa, and as a Senegalese tirailleur, you must again attempt to prove you worth by making a last stand against the Germans, only this time in Provence. Exceptions only prove the rule, for while there’s one map in which a Norwegian resistance fighter must chart a stealthy path between campfires (lest she succumb to hypothermia), her other missions involve the same sort of sabotage as the game’s other protagonists; she just gets to use cross-country skis while moving from objective to objective.

Battlefield V’s Grand Operations, however, manage to avoid such redundancy with elements of emergent gameplay. Structures can be fortified with barbed wire, sandbag walls, and other defenses, and they can be broken apart—you’re as likely to die from collapsing debris as direct artillery blasts—as vehicles create new paths around kill zones. Units can be upgraded and promoted to new subclasses, increasing an army’s tactical options, so while the overall objectives may remain the same, one’s approaches to a constantly shifting frontline must always be novel and adaptive.

Moreover, each of the three days of a given operation follows its own gameplay conventions. For example, Airborne, in which one side must parachute into a battlefield and then escort a bomb-carrying team member to a guarded artillery emplacement, is very different from Breakthrough, which requires a team to simultaneously hold multiple objectives in each of several fronts before it can progress deeper into enemy territory. Even the most familiar of the modes, Conquest, in which the team with the minority of captured flags bleeds respawn tickets faster than its opponents, plays out in unpredictable ways, due to the ebb and flow that comes from suddenly exchanging the points slowly accumulated by repairing, resupplying, and killing, for a momentum-changing vehicle.

By allowing you to create your own smaller narrative within the multiplayer, the game avoids the issues it runs into with War Stories, which overpromise at every turn. “Under No Flag,” for one, purports to be about the creation of the Special Boat Service (SBS), suggesting that protagonist Billy Bridger’s tactics would serve as a blueprint for future spec ops teams, and yet his levels play out almost identically to those featuring the Norwegian resistance fighter in “Nordlys.” “Tirailleur” specifically boasts that it’s “going to tell you a story that you don’t know,” but other forms of media have shown black soldiers who encountered racism while fighting for their country; underestimated, strong-as-nails women; and criminals with patriotic hearts. These single-player campaigns aren’t so much specific tales of heroism and sacrifice than they are instructions and guidelines on how to play multiplayer.

Battlefield V’s failure to communicate, whether the emotional disconnect of each War Story or the difficulty of organizing your fellow soldiers in a Grand Operation, is the crippling problem that holds the game back from greatness. Because of how much teamwork is required, unless you’re playing with a four-man squad of trusted friends with voice chat, these massive engagements can feel imbalanced and unfun, especially as the maps devolve into chaos. That frenzied confusion might have been what it actually felt like to be in the trenches of World War II, but it’s no way to build a game.