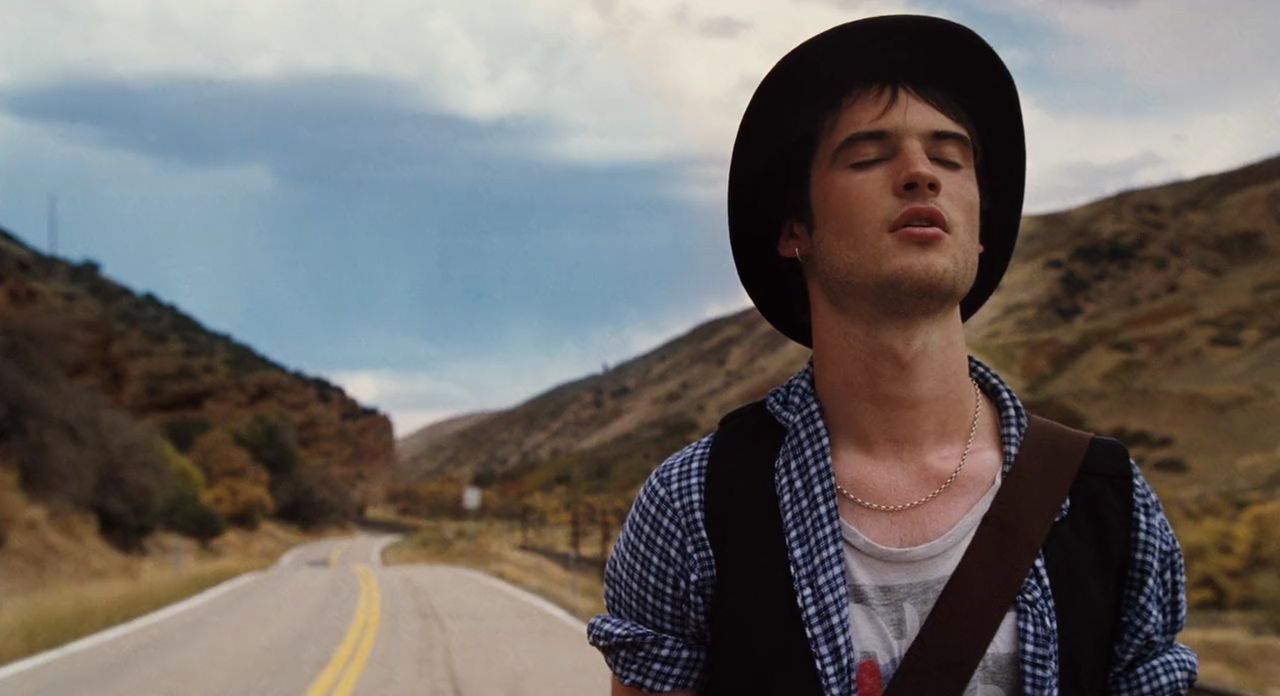 For a film to be loathsome during its opening seconds is a minor feat; to then become increasingly worse over its remainder is a far greater sort of dubious accomplishment. Kudos, then, to Waiting for Forever, an indie so twee, self-satisfied, and across-the-board affected that words feel somewhat insufficient; to fully convey the magnitude of its clumsiness would probably also require a PowerPoint presentation involving diagrams and pie charts.

James Keach’s film opens inauspiciously with the sight of Will Donner (Tom Sturridge)—a twentysomething street-performing clown dressed in plaid pajamas, a black vest, and a round-brimmed hat—grinning bufoonishly and bowing theatrically to passing vehicles as he hitchhikes down a nondescript country road, an image of precious hipster cuteness set to an equally nauseating singer-songwriter ballad. Will looks like something vomited up from a Soul Asylum video and behaves like a reject from a quirky mental-hospital dramedy, though even this initial, off-putting entrance doesn’t quite prepare one for his first scene of dialogue, in which—after being picked up by a frisky older couple bickering over cigars like creaky caricatures—he explains, in 2nd grade-level florid narration, his life’s purpose: to woo childhood love Emma Twist (Rachel Bilson). This romantic pursuit charms his companions, but it’s clear from the outset that Will is a repugnant creep—not just because of his dimwitted starry-eyed looks and fool’s grin, but because he’s spent the past few years stalking Emma from city to city.

Returning to his East Coast hometown because Emma, having been fired from her TV acting gig, is going to be there to tend to her sick father (Richard Jenkins), Will is berated by his responsible banker brother, Jim (Scott Mechlowicz), and humored by his aw-shucks appliance store-owner friends (Nikki Blonsky and Nelson Franklin), supporting players whose one-dimensional meanness/niceness exacerbates the film’s shallowness. After obsessively shadowing Emma, Will plans to finally confess his amour to her, but unfortunately, at that very moment, things wind up getting oh-so-complicated in the Twist household. Emma’s father has an undefined fatal illness (“I’m dying, let’s get this show on the road!” he grumbles) and it’s made him cranky and nasty to his wife, Miranda (Blythe Danner), who comes off as mentally slow and, consequently, seems more like she should be Will’s mom. Moreover, Emma has recently cheated on her nasty boyfriend, Aaron (Matthew Davis), who appears on her doorstep to “forgive” her, all while failing to mention he’s accidentally murdered the guy with whom she fooled around.

When not indulging in nostalgic flipbook-style flashbacks, director Keach shoots his material with sub-sitcom flatness, and regularly returns to the indie-balladeer well to amplify the mawkishness. Waiting for Forever’s failures, however, stem largely from abysmal scripting and matching performances. Keach expects us to delight in Will, a happy-go-lucky innocent who sees only the joy and magic in life, an attitude he expresses via his pajama pants, his sappy declarations of love (he analogizes his feelings for Emma as a desire to literally enter her aorta), and his habit of randomly hopping and flittering about like a bohemian sprite. Whereas Will’s simpleminded optimism is meant to be endearing, it instead tests one’s gag reflex, and proves all the more maddening for being embraced by virtually everyone he encounters, including the featureless Emma, who is soon unable to resist Will’s indefatigable good cheer and so-so juggling skills. That anyone finds Will tolerable immediately relegates the story to the realm of goofball fantasy, but more laughable still are the particulars of his tale, which eventually has him framed for murder by Aaron (apparently, this scheme takes just one phone call), freed on bail (despite being a first-degree murder suspect), and acquitted of all charges thanks to, well, it’s not clear; one second he’s accused, and the next second the cops have magically nabbed the real killer. Yay, justice!

Free-spirit vagabonds rule and fuddy-duddy bankers are lame-o in Waiting for Forever, while old people are there to die so that young people can pretend to be profoundly damaged. After the first time Keach lingers on Bilson’s face during an emotional reaction shot and she responds with utter blankness, the film loses any chance at delivering engaging drama, though it nonetheless plows ahead in that vein, lacing its toxically phony frothiness with dark, grieving undercurrents it’s incapable of properly handling. A traumatic train crash, fights involving thrown household objects, and a recurring treehouse motif also flesh out Will and Emma’s budding relationship, which blossoms despite the fact that he’s a pajamas-wearing mentally handicapped homeless circus freak who’s been furtively trailing her around the country for the better part of a decade.

To provide the plot with additional weight (as well as give Jenkins and Danner something to do), Keach shoehorns in a scene in which Jenkins’s ailing paterfamilias, while in the bathtub, spits venom at his wife so that she’ll hate him, and therefore be better equipped to cope with his impending passing. It’s a moment that, like the film itself, is as random as it is bogus, and merely confirms that, when Jenkins’s daddy finally departs these rancid proceedings, he’s the lucky one.