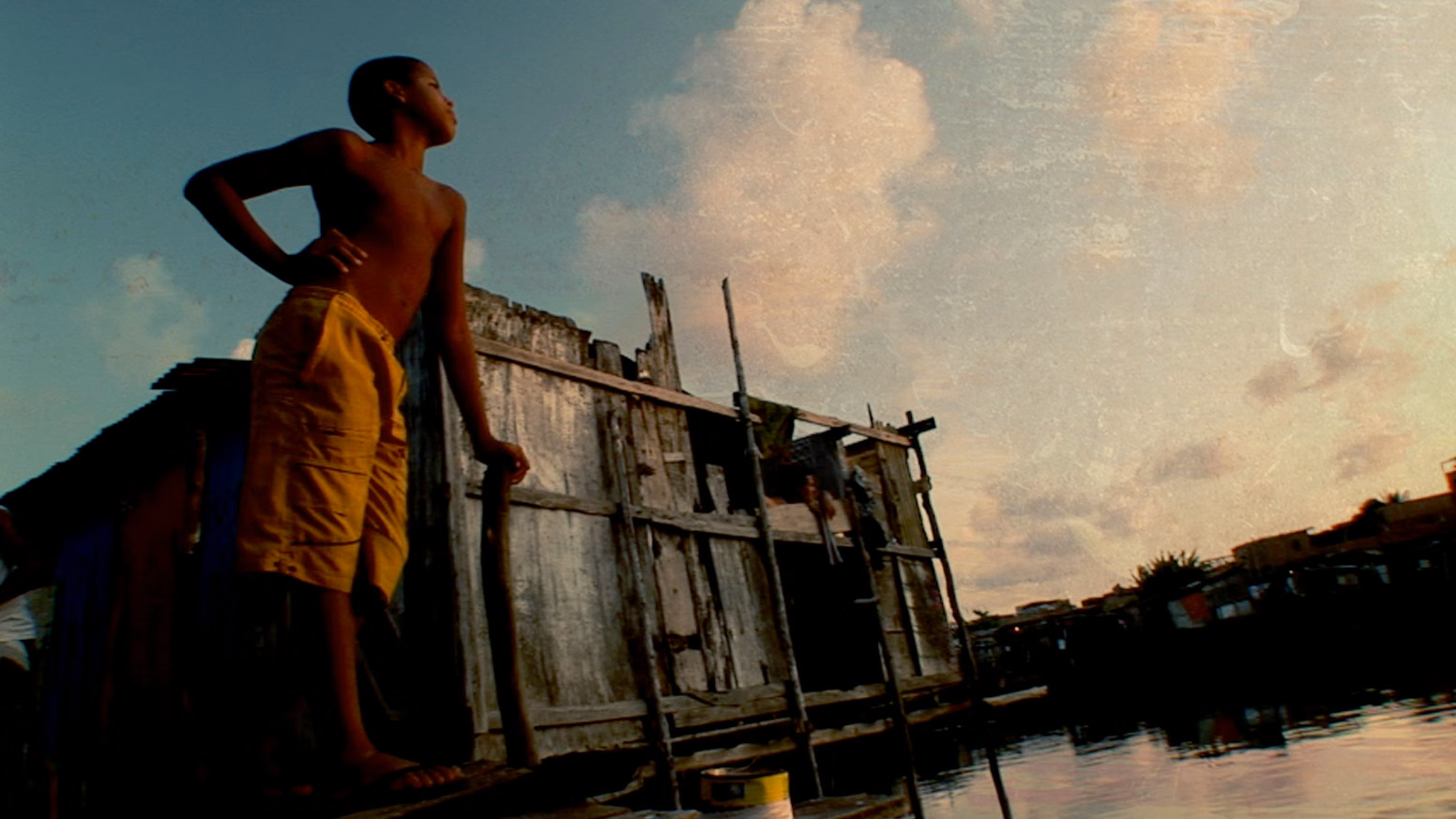 Bay of All Saints, a documentary by American director Annie Eastman, opens with Noreto, a sprightly Brazilian electrician, leading her into the world of the palafitas— the wooden shacks that make up a water slum in the bay in Salvador, capital of the northeastern Brazilian state of Bahia. Having left to live on dry land, Noreto provides refrigerator repair to the palafitas population, and forms close bonds with the women, most of them single mothers, whose financial circumstances have forced them to take up residence in the most impoverished and precarious part of town. Acknowledging the flabbergasting contrast between the slum and the country’s recent boom, Noreto comments on the town’s rapid commercialization: “It has five-star hotels, but we have our piece of the ocean.” This might sound like a euphemism, considering that what Noreto’s referring to are the crumbling wooden shacks, built on stilts, the area under them filled with all types of garbage, and infested with rats. But Noreto is also referring to the fact that the three women whose homes Eastman visits, Dona Maria, Geni, and Jesus, are meticulous housekeepers, proud to own any type of property, no matter how degraded. As the story develops, we witness Noreto’s interactions with these women, at times acting as a sage and mentor, at other times flirtatious and playful.

Eastman frames the story by enfolding it into the larger narrative of urban development: clearing out the bay coves of slum dwellings, and reclaiming the bay for ecological preservation. The ambitious project is vast, its entanglements beyond the expose that Eastman can provide in her film. Just under $50 million has been allocated by the World Bank, administered by the federal government and run by the local agency CONDER. Its architects first appear in the palafitas in 2006, bringing hope, and fear. Will the slum residents get the new housing they are being promised? Some of the shacks collapse, yet the project will take another six years, with no actual new units built on site.

If the development project were the film’s focal point, we would have likely witnessed a somewhat Kafkaesque thread—a paper trail, it seems, with no end. But Eastman uses it as her background, zooming in on what’s happening in the women’s lives. Is the cycle of poverty endless? Is there are any news, good or bad, on the horizon? The answer, it turns out, isn’t so simple. No quick affirmation may be found, but there are some changes. Dona Maria, whose parents were slaves, and who was given away as a domestic servant and abused in childhood, has been feeding an extensive family, taking care of her grandchildren. She symbolically loses one of them, Rebecca, to the dry land, when the girl is picked up by child services, and takes up residence with her mother. But Dona Maria also attempts a change of her own by enrolling in a literacy course. Jesus, whose daughter is pregnant at 15, is so desperate to leave the palafitas, she starts a relationship with an alcoholic who owns a brick house. She soon rebels against domestic abuse, and moves back, with great relief, realizing that the water slum offers her more protection and freedom. Geni, the one woman who used to live on dry land, and moved to the slum with her son only after being abandoned by her husband, works as an assistant manager at a fancy pizzeria. Geni alludes to the fact that the people in town have no idea what great distance—symbolically, since the palafitas are geographically close—she travels, each time she steps on dry land. Geni emerges as the shantytown’s spokeswoman, confronting the reality, in which people like her are condemned to wait and to see what plans the government has for them.

The documentary eschews stereotypical portrayals of Brazilian slums as the festering ground for prostitution and drug trafficking. Instead, it seeks out the stories whose protagonists are moved to articulate their desire for basic human rights, and the need for self-determination. Eastman was in fact granted the entry to the slum with the knowledge of the traffickers, giving voice, and presence, to the population that she felt was vastly invisible to the increasingly prosperous Brazilian middle class. Her film, which won the audience award in this year’s South by Southwest, was warmly received at the documentary film festival É Tudo Verdade (It’s All True), currently taking place in four Brazilian cities including São Paulo and Rio de Janeiro. The film garnered attention for its fearless and engaging storytelling, its flights of humor and lyricism, which nevertheless don’t obscure the seething anger and desperation of Brazil’s most needy. As the slum is being cleared out, and its area reclaimed (only 40 families remain on the water, out of thousands), the film also serves as a document of a community that has ceased to exist, some placed in rental units in town, others resettled on the peripheries. As a document, it resists demonizing the palafitas, suggesting that it’s intricate network of neighbor support, community rallying, and slum-economy forms a coherent, if closed, microcosm, far from the privileges of ordinary citizens.

Poster Lab: The Cabin in the Woods