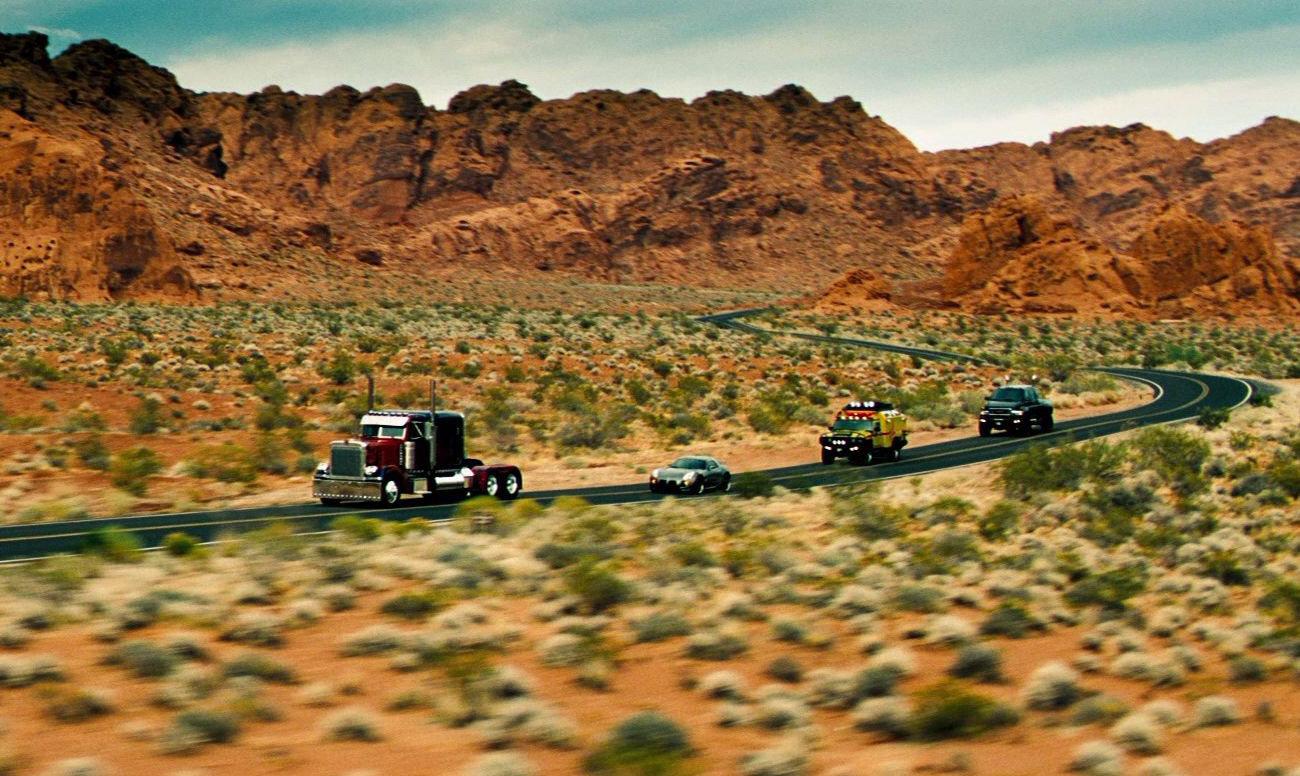 If Michael Bay loves the military so much, why doesn’t he just marry it? The reigning maestro of mindless summer crap, Bay is fervently turned on by war machinery and the men and women who wield it, his endless shots of cocking guns and screeching fighter jets balanced by droolingly romantic magic-hour vistas of heroic soldiers walking in slow motion. He’s a weapons fetishist, which makes him a natural fit to helm Transformers, a project (based on the 1980s Hasbro action figures and TV show I once adored as a kid) that affords a superlative opportunity to slobber over not only the mighty U.S. armed forces but also gigantic robots who—equipped with machine guns, laser canons, missile launchers, and seismic bomb-thingies—are intricately designed, outrageously powerful WMDs disguised as cars, planes, and other earthly devices. From the get-go, slobber he most definitely does, his film commencing with a bot attempting to steal ultra-covert national security information by ambushing a U.S. military outpost in Qatar, a nocturnal attack notable primarily for its wealth of tank-flipping explosions, visual incoherence, and elaborate orchestration of mayhem, all of which Bay imagines as some sort of superpowered 21st-century version of Pearl Harbor’s centerpiece sneak attack.

And like his Pearl Harbor, Transformers feigns interest in human drama while lavishing most of its TLC (and copious FX budget) on wide-scale conflict, in this case a series of battles between man and machine that culminates in a full-on slugfest between the rival Transformer factions in downtown L.A. Tethering those extravagant sequences together is the story of Sam Witwicky (Shia LaBeouf), a dorky high-schooler whose father buys him a beat-up yellow Camaro as his first car, finds out the vehicle is really a towering extraterrestrial robot named Bumblebee, and then winds up at the center of a war between the good Autobots and the evil Decepticons, both of whom covet a life-giving cube that Sam’s great-great-grandfather discovered—located next to frozen Decepticon leader Megatron—underneath the Arctic ice. In the warm portrait of Sam’s home life and relationship with his father (Kevin Dunn), executive producer Steven Spielberg’s influence can be gleaned. Yet it’s all just a pretense, as Bay affects mild concern for Sam’s plight but, in truth, cares not a lick for any of his caricatured characters, whose overriding purpose is to spout platitudes and give the audience a person’s-eye-view of the cacophonous maelstrom, and whom the director treats as mere pesky narrative requirements for his principal heavy artillery action.

Bay dials down the insensitivity that poisoned Bad Boys II, but that doesn’t mean it’s altogether absent. Unrepentant ogling of Sam’s sidekick Mikaela (Megan Fox)—she’s sexy, digs cars, and has a criminal record (the hot girl trifecta!)—is standard-issue for such a geeky popcorn flick. But there’s no constructive reason to have American grunts criticize their Latino comrade for speaking Spanish, nor for positing African-Americans (both Bernie Mac and Anthony Anderson) as buffoonish clowns—car-dealer Mac even employs a Bozo—prone to yelling at Mom/Grandma. Bay’s familiar lack of humanism extends to his callous disregard for those perishing in the Transformers’ fights—we’re actually asked to gasp with delight at a presumably full commuter bus being torn in half by a rampaging robot—and also, ultimately, to the Transformers themselves. Admittedly, the filmmaker finds himself in a damned-if-you-do, damned-if-you-don’t situation with his titular figures, as the time spent on their (source material-faithful) personalities makes them seem too cartoony for the otherwise realistically rendered proceedings, and yet his compensatory decision to largely ignore said personalities turns them into vacant, uninteresting sentient gadgets. Only with Bumblebee, who speaks via commercial radio soundbites, does Bay give his technically impressive CG contraptions real, soulful life; otherwise, they’re just whirring, mutating, similar-looking contraptions constructed out of shiny, angular chrome parts.

Even when the director stumbles upon something that works, he still manages to muck it up, whether that means tediously prolonging a scene in which the Autobots hide from Sam’s dad, or having Bumblebee pee on John Turturro’s cocky special-ops commander. That said, the film mostly adheres to the typical Bay template: a mise-en-scène defined by its willful indifference to spatial dynamics (Lord only knows how one image is geographically related to the next), cinematography so glossy one fears the actors and sets will slide right off the screen, one-dimensional performances, and simplistic lip-service to the concepts of patriotism, sacrifice, and courage. One would think that a story about undetectable enemies infiltrating home soil might provide fertile opportunities for contempo subtext, a notion further stoked when Josh Duhamel’s army stud, amid a city street skirmish, tells civilian Sam, “Everyone’s a soldier now!” Alas, Transformers is so hot and bothered over its reassembling robots that it can barely muster the energy to develop even an up-front text that makes sense, such that when the final battle erupts, identifying combatants as well as motivations proves nearly hopeless. “This is easily a hundred times cooler than Armageddon,” says one witness to the Transformers’ arrival. Perhaps, but, of course, that’s not saying much at all.

Review: The Devil Came on Horseback