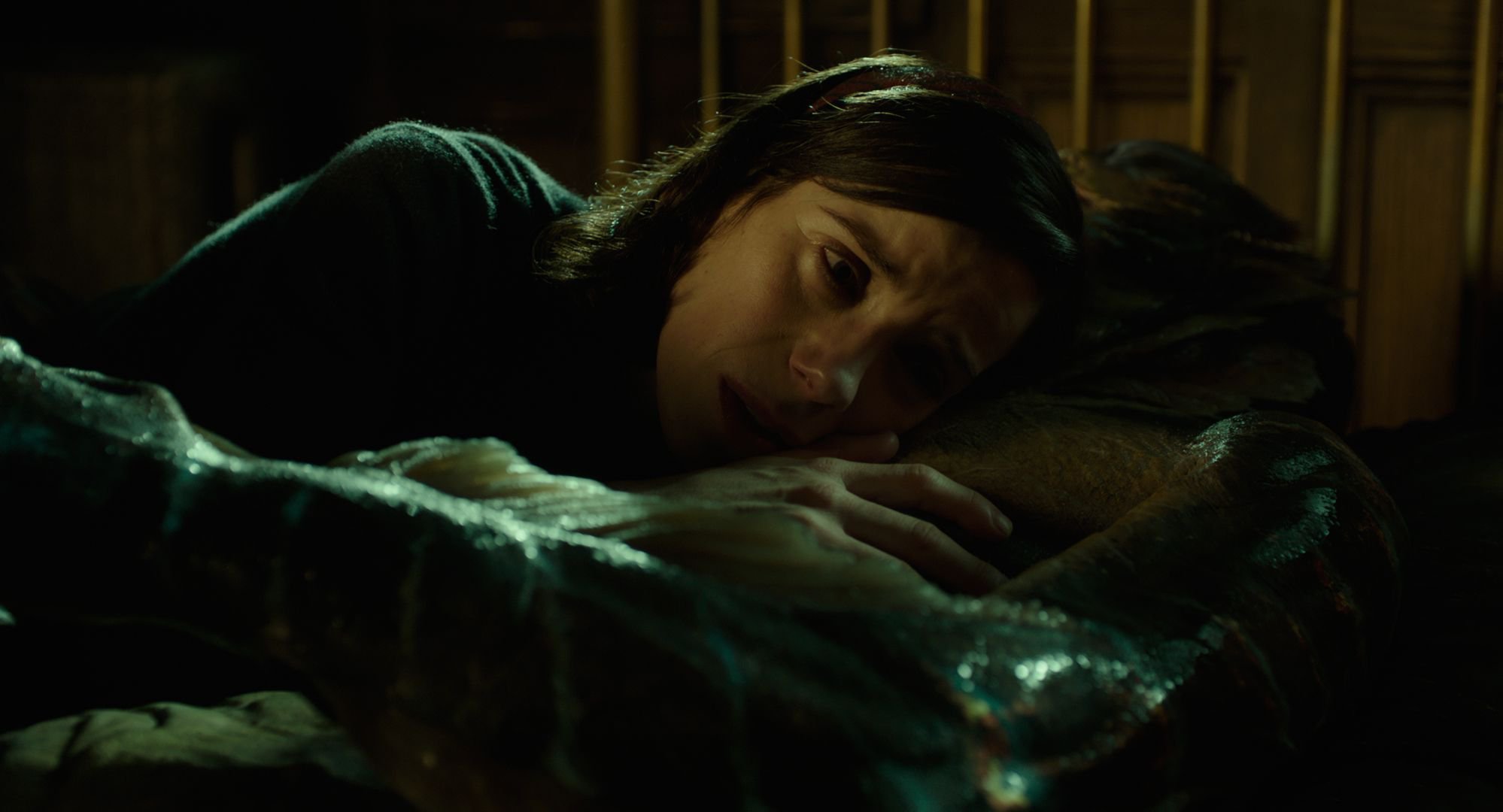 Though set in Baltimore in the early 1960s at the height of the Cold War, Guillermo del Toro’s The Shape of Water truly takes place in Movieland: that generic realm of borrowed fantasies where The Majestic and Amélie are also set. Movieland is beautiful in a wax-museum way—colorful, velvety, derivatively iconic, and consciously reminiscent of classic studio-era features—but there’s nothing in this dimension that suggests a spontaneous feeling or particularized texture. A diner in Movieland isn’t just a diner, but the diner: the mom-and-pop pie-and-coffee shop of your Norman Rockwell-fed dreams. Ditto the movie theater, which features a vast palace with red seats so luscious that they steal scenes out from under this film’s characters.

Del Toro’s Baltimore is also governed by an aquatic color theme, which establishes a link between the city and the brackish water world inhabited by the Amphibian Man (Doug Jones), a humanoid sea creature who suggests a sensitive and elegant relative of the Creature from the Black Lagoon. Del Toro connects water to sex and domesticity, alluding to the comfort that the Amphibian Man presumably experienced in the Amazon and which Elisa (Sally Hawkins), a mute janitor for a secret government facility, has never known.

The lab where the Amphibian Man is imprisoned is a triumph of sensual gothic set design; a murky pool supported by a vaginal sewer grate could have been imagined by H.R. Giger. The set is bathed in swampy, silvery greens and blues, which increasingly permeate the film’s other locales as rain approaches, connoting Elisa’s sexual awakening with the Amphibian Man, while serving as a deus ex machina to whisk her and him away from the cruelty of a paranoid and intolerant patriarchal society. Said cruelty is embodied by Strickland (Michael Shannon), an official who seems to have arrived at the lab solely to work the Amphibian Man over with his cattle prod.

The Shape of Water has been made with a level of craftsmanship that should be the envy of most filmmakers, but the impudent, unruly streak that so often gives del Toro’s films their pulse has been airbrushed away. For all of this film’s impersonal gorgeousness, there isn’t a memorable image along the lines of the red soil from Crimson Peak or the shot of Federico Luppi’s Jesus Gris licking blood off a bathroom floor in Cronos. Del Toro’s sentimental side takes over here, leaving the audience with a plot that fuses E.T. and Free Willy with a frustrated woman’s daydream of sexual salvation.

Though its narrative hinges on bestiality, The Shape of Water is studiously devoid of kink. Throughout, Del Toro is skittish about the practical implications of his concept, which the filmmaker utilizes for social platitudes, equating the Amphibian Man’s otherness with real-life alienation and prejudice. After sleeping with the Amphibian Man for the first time, Elisa tells Zelda (Octavia Spencer), a fellow cleaning woman, that his penis folds out of a crevice within his body, which she communicates through sign language. This is one of the film’s best moments, reveling in the pleasure that the drab Elisa is allowed to derive from discussing something naughty.

Del Toro, though, doesn’t dare to show the practical physical challenges that might be inherent in Elisa coupling with Amphibian Man, relying instead on generically cuddly images of the lovers embracing, and later springing a pastiche musical number straight out of The Artist. The wildness of broaching sexual taboos—explored in films as diverse as Jean Cocteau’s Beauty and the Beast, Jack Arnold’s Creature from the Black Lagoon, del Toro’s Hellboy II: The Golden Army, and Vincenzo Natali’s Splice—is ignored by The Shape of Water, which preaches of the power of romance without acknowledging the work and joy of adjustment that goes into fostering and maintaining love.

With the exception of the extraordinary Jones, the actors are boxed in by archetypal characterizations. Elisa would be poignant if we hadn’t seen her suffering, starry-eyed romantic countless times before in other films, and if her poignancy wasn’t unrelentingly capitalized by del Toro and Hawkins. Elisa’s neighbor, Giles (Richard Jenkins), is another dear and solitary daydreamer, a gay man who’s defined by his gayness, loneliness, and dreaminess. Zelda’s an African-American woman who experiences a romantic isolation that’s different from that of Elisa and Giles, living in a marriage that’s calcified into monosyllabic routine. Mostly, though, Spencer is tasked with playing another character who offers the protagonist sassy common sense.

The film’s heroes are so tolerant that they don’t think to question the notion of a woman hooking up with a member of another species, which could be the wellspring for a lively, dirty punchline or two. Del Toro is aiming for critique via contrast, proffering a rosy vision of romantic acceptance that’s pointedly unpalatable to a real-life society governed by boundaries and biases. But such critique isn’t earned because del Toro isn’t willing to acknowledge uncertainty or emotional or moral fallibility on the part of his heroes, shifting all of humankind’s unsavory characteristics over to Strickland and other American and Russian military personnel. Why doesn’t Elisa, presumably romantically alone most of her life, feel terror once she’s found love?

The Shape of Water doesn’t allow you to discover anything for yourself. Elisa masturbates in her tub to a timer each morning, indulging a resonant ritual that’s connected, via an egg motif, to the Amphibian Man. One of Strickland’s gimmicks is that he chews hard candy while torturing people, and del Toro provides him with a speech in which he explains why he chews hard candy while torturing people. A moving and initially unspoken visual rhyme—between the scars on Elisa’s neck and the Amphibian Man’s gills—is underlined during the climax. Elisa’s name evokes Audrey Hepburn’s character in My Fair Lady, and even Zelda’s middle name has been chosen so that Strickland may deliver a bad-guy speech ridiculously synching the film’s narrative with the story of Sampson and Delilah.

For all its conceits, themes, and symbols, The Shape of Water fails to impart a sense that its antique tropes have been adopted for a purpose. People, smitten with the film’s banalities, will claim that it has “heart.” But del Toro’s heart beats louder when he allows himself to play, dreaming his own dreams and respecting his heroes enough to sully them.