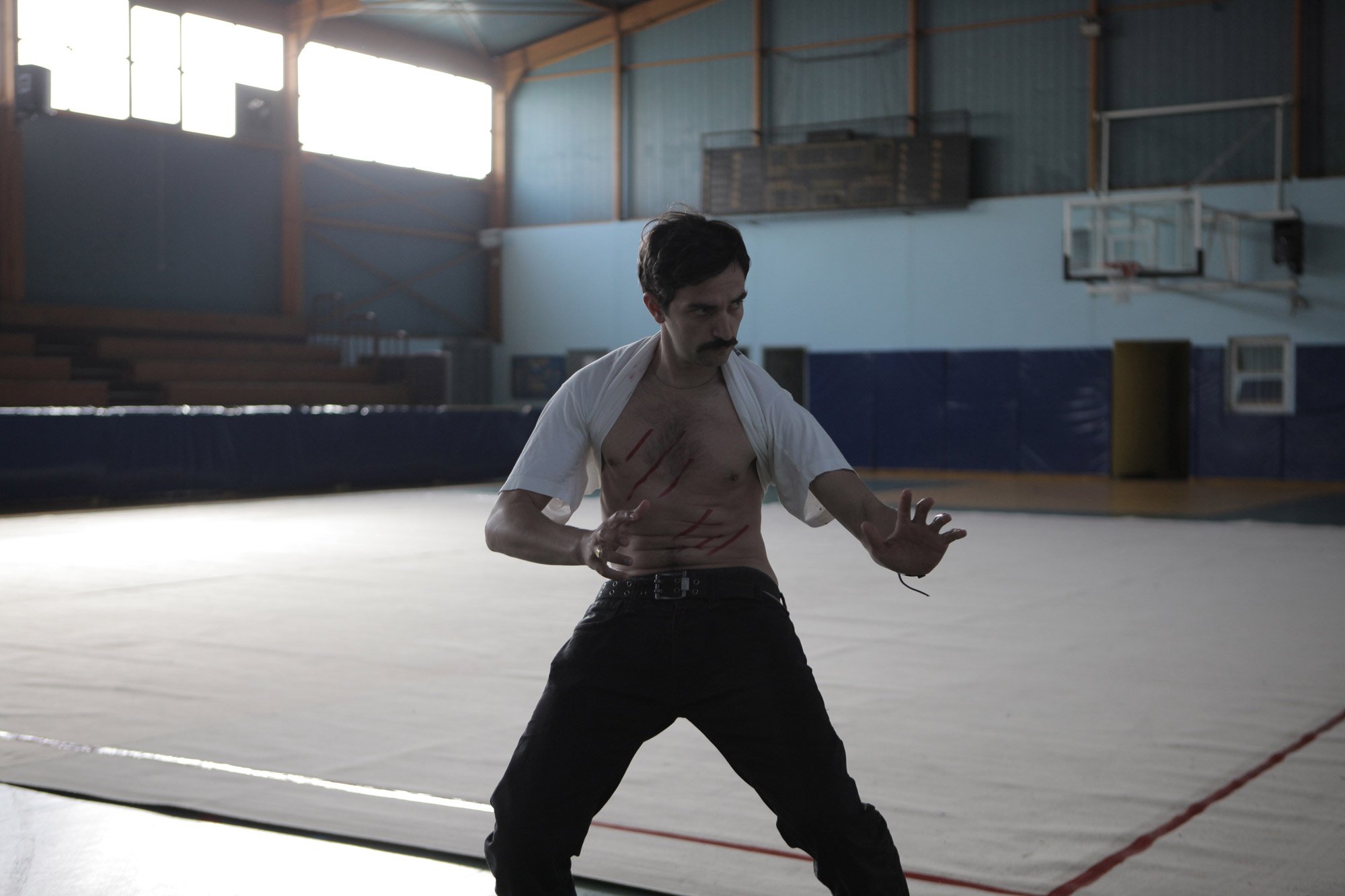 Rounding out its 55th year, the generally celebratory San Francisco International Film Festival seemed to open on a melancholy note, with the deaths of two illustrious film-culture stalwarts still fresh in the memories of local cinephiles: Graham Leggat, who had since 2005 been the San Francisco Film Society’s executive director, succumbed to cancer last year; and Bingham Ray, a veteran force in the indie circuit who’d agreed to take over the position, passed away in January at the Sundance Film Festival. Just as Nietzsche envisioned art as “the redeeming, healing enchantress” that could confront despair, it was up to cinema then to alleviate the event’s potentially mournful mood. Indeed, the titles chosen to pay tribute to the two men—Benoit Jacquot’s unusual Versailles-set drama Farewell, My Queen, which opened the festival in dedication to Leggat, and Carol Reed’s sardonic 1949 masterpiece The Third Man, reportedly Ray’s all-time favorite film—served as reminders not only of SFIFF’s characteristically eclectic selection, but also of its dedication to acknowledging the medium’s past while steadfastly gazing ahead for discoveries.

Situated at a crossroads of film festivals (opening after SXSW, unfolding at the same time as Tribeca, and wrapping just prior to Cannes), SFIFF is a place for encountering first-time visions as well as catching up with established artists. Alps, Yorgos Lanthimos’s follow-up to Dogtooth, builds on the Greek filmmaker’s absurdist view of life by venturing beyond the previous film’s hermetic living room and finding an even wider set of suffocatingly stylized communities. To give away too much of the plot would be to rob the narrative’s interconnected shards of relationships and rituals within rituals (a teenage gymnast’s demand for pop rather than classical music, a nurse’s stiffly recited ecstasy during a lugubrious bit of cunningulus, an old paterfamilias’s ballroom reminiscence) of their ominous sense of mystery. Suffice to say that Lanthimos has expanded the surreally terse style and notions of communication and identity of his breakout film without sacrificing any of its singularity; call it the Happiness to Dogtooth’s Welcome to the Dollhouse.

A more benign web of affairs is spun by prolific Korean auteur Hong Sang-soo in The Day He Arrives, a doleful comedy of romance (as opposed to a “romantic comedy”) that nevertheless boasts a structure as ingenious as the one of Alps. Following a semi-retired film director (Yu Jun-sang) as he runs into old girlfriends, drinks with students, hears his own insecurity echoing inside his head, and repeats it all over again (or does he?) during a trip to his native Seoul, it works up a gentle, slowly enveloping mist of falling snow, clinking glasses, and zigzagging emotions. The idea of “untraceable forces at work” comes up during one of the characters’ numerous tipsy philosophical sessions, and a tinge of cosmic existentialism seems to hang over the film’s moments of graceful humor and confessional anguish alike. “I have a memory to cherish now,” the protagonist murmurs the morning after hooking up with an acquaintance. After viewing Hong’s often sublime mélange of possibility and rue, viewers can say the same.

If it’s difficult to mistake Alps and The Day He Arrives as anything but films by their respective directors, it’s even more difficult to recognize The Exchange as having come from the same man who made The Band’s Visit. In place of the earlier film’s deadpan hope for cross-cultural solidarity, Eran Kolirin here offers a peculiarly tranquil portrait of private dislocation. A tiny change in his schedule and a different view of his apartment are all it takes for a meek Tel Aviv university professor (Rotem Keinan) to slide into an obsessive search for the alien in the familiar. Suddenly, he’s exposing himself in elevators, screaming into empty apartments, and otherwise seeking to disrupt his usual routines in ways that increasingly alienate his wife (Sharon Tal). Depicting its central breakdown with an almost perverse visual and tonal blandness, Kolirin’s film ultimately functions best as a concept than an emotional experience. Still, it lingers in the mind as a snapshot of an unsettled soul willfully receding from the universe: Had it not already been taken, the title The Man Who Wasn’t There would have fit it perfectly.

Next to the purposefully nondescript settings of The Exchange, the world of Terraferma is tangibly specific from its very first frame. Set in a small, secluded Sicilian island where volcanic rocks and decaying boats are vivid enough to qualify as supporting players, Emanuele Crialese’s drama pits social strictures against the more instinctive “laws of the sea.” Unfurling over the course of a humid summer season that finds a fishing community abruptly invaded by pleasure-seeking tourists, it starts off promisingly as a detail-rich coming-of-age story with a teenage local (Filippo Pucillo) at the center of a tug of war between a grandfather determined to keep the island’s traditions alive and a mother with eyes set on the mainland. As soon as a pregnant Ethiopian refugee (Timnit T.) and her son are saved from drowning and hidden at the boy’s home, however, the story becomes a paternalistic, nuance-free lecture on immigration (think of the Dardenne brothers’ La Promesse with all the thorny moral quandaries neatly flattened and folded) that dulls its visuals and rhythms. Anyone who’s seen Golden Door has the right to expect far more from Crialese.

A longtime fixture of film festivals, veteran French publicist-programmer-movie buff Pierre Rissient was deservedly honored at this year’s SFIFF for his contributions to cinema. A screening of his obscure directorial efforts (Alibis, Cinq et la Peau) would have been welcome, but viewers had to do with Todd McCarthy’s documentary Pierre Rissient: Man of Cinema, an enjoyable if less demanding peek into the man’s demanding, omnivorous, and passionate mind. Packed with brisk anecdotes (five words: Fritz Lang watching Deep Throat), McCarthy’s affable doc contrasts starkly with Eric Baudelaire’s The Anabasis of May and Fusako Shigenobu, Masao Adachi, and 27 Years Without Images, a quite different view of a globe-trotting cinema figure. The subjects, never seen but plaintively heard over collages of film clips and home movies, are Japanese director Masao Adachi, a 1960s cine-activist who underwent a Godardian withdrawal from mainstream filmmaking to join the Red Army in the Middle East, and his daughter May, who for years experienced the ensuing turmoil of bombings, abductions and deportations. A work of engagement and displacement, not to mention a tantalizing glimpse of Adachi’s oeuvre (a contemporary of Oshima with such confrontational titles as AKA Serial Killer and Female Student Guerilla), it’s an evocative study of the terrain between cinephilia and revolution.

For crummy cinephilia, however, look no further than Laurent Achard’s The Last Screening. Set largely inside an unsuccessful movie theater, it labors to find a new Norman Bates in the gawky creep (Pascal Cervo) who sells tickets, runs the projector, and then retreats to a hidden chamber decorated with the severed ears of his female victims. The subjective collisions between reality and celluloid set against a crumbling cinematheque intriguingly evoke a ghoulish reimagining of Federico Veiroj’s A Useful Life; instead, Achard’s humorless handling of the material (complete with blasphemous abuse of Jean Renoir’s French Cancan) suggests a grade-Z ‘80s horror flick like Pieces or Fade to Black that’s gotten too big for its britches.

Mathieu Kassovitz’s Rebellion, a different breed of Gallic misfire, is after a real-life horror show, namely the bloody Ouvéa hostage crisis of 1988. Also starring as a negotiator caught between French military forces and Kanak insurgents, Kassovitz voices his earnest intentions right off the bat: “I’m trying to understand how we’ve come to this point.” What follows is a panorama of political manipulation and squashed struggle that’s not so much bad as it is insipidly respectable, driven by impotent remorse and shot with an anonymous technical proficiency that’s miles away from Kassovitz’s feverish camerawork in La Haine.

Easily the festival’s most contentious documentary, The Sheik and I finds impish self-chronicler Caveh Zahedi in top abrasive form. Finding himself invited to turn in a piece of “art as subversion” for the Sheik of Sharjah’s exhibition, the taboo-happy filmmaker takes one look at the rules assigned him, which include “Do not make fun of Islam” and “Do not make fun of the Sheik,” and gives the camera an unmistakable he-don’t-know-me-very-well-do-he look. Taking family, crew, and students with him to the Emirates, Zahedi proceeds to hire locals for the kidnapping plot he’s concocted for the movie, incorporate Muslim prayers into Bollywood-style musical numbers, and generally play up the Boorish Yankee Abroad stereotype. Result: The project is aborted and those involved are threatened, so Zahedi, who’s warned that “people go to jail for honesty,” naturally turns it into a meta-arabesque about his freedom of speech. Peopled with redacted interviewees, pockmarked with crude animated interludes, and punctuated by more awkward meetings than an Albert Brooks comedy, the film is by turns candid and exasperating in its mischievous autopsy of the role of the artist. Zahedi’s willingness to dissect himself makes him a valuable troublemaker, but, donning robes while straddling a stuffed camel, he here lands closer to a Sacha Baron Cohen sketch than to Mohsen Makhmalbaf’s compassionate self-reflexivity.

The festival came to a close with Don’t Stop Believin’: Everyman’s Journey, Ramona S. Diaz’s documentary about YouTuber-cum-Journey-singer Arnel Pineda, though the 3D presentation of Francis Ford Coppola’s ineffably, lovably bonkers Twixt might have made for a far more fitting conclusion. The most playful entry in the legendary filmmaker’s recent slew of idiosyncratic, personal projects, it examines the creative process as a knowing contemplation of Coppola’s exploitation Roger Corman days, its narrative a chunk of gothic wackiness that suggests Dementia 13 remade with the gaudy romanticism of Rumble Fish. Anchored by a bloated, blocked horror novelist (Val Kilmer) and featuring the phantom of Edgar Allen Poe (Ben Chaplin), a blood-sucking nymphet (Elle Fanning) with braces on her fangs, and other cheerfully cheeseball effects, this oneiric film is sumptuous, clumsy, poignant, absurd, and utterly unafraid to fall on its face. In other words, the perfect capper for SFIFF’s mixture of the polished and the experimental.

The San Francisco International Film Festival ran from April 19—May 3.

Review: You Are Here