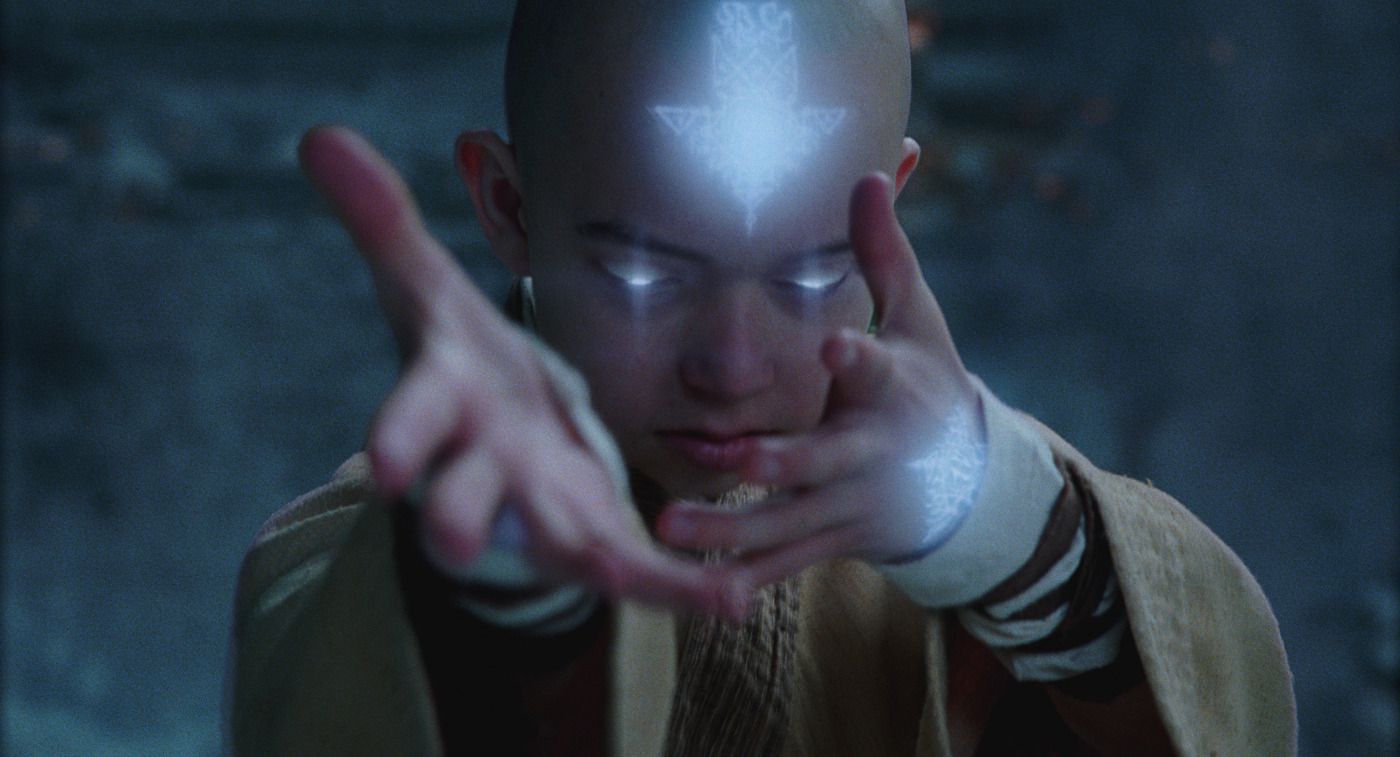 After a string of underperforming self-penned duds, M. Night Shyamalan throws his hands up and sells out with The Last Airbender, an adaptation of Nickelodeon’s animé-influenced series (whose main title, Avatar, has for obvious reasons been dropped) that boasts almost no sign of the director’s idiosyncratic imprimatur. Aside from being shot in ‘scope, there’s nothing about this CG-overloaded adventure to mark it as a Shyamalan creation, devoid as it is of patient pacing, languorous cinematography, a mood of otherworldly dread, or—mercifully!—a twist ending. Instead, it’s merely a work-for-hire effort, which might have benefited the filmmaker by compelling him to drop his more pompous habits if, of course, he was actually adept at handling this sort of big-budget spectacle. He isn’t.

Shyamalan’s therapy-fixated writing has always been wrongly convinced of its own profundity, but at least the filmmaker knew how to craft a consistent tone. Perhaps the most striking thing about The Last Airbender, however, is its wholesale lack of rhythm, as the film herky-jerkily jumps between hectic incidents scored to swollen orchestral music. Its vain attempts to smooth over such unevenness with loads of narration and tell-don’t-show blabber exacerbate the impression that Shyamalan—recounting the tale of a boy able to bend (i.e. control) the power of air, earth, water, and fire—is himself hopelessly out of his element.

In a magical far-off land divided into regional divisions that reflect real-world ethnicities (earth enclaves = rural Japanese, fire hordes = Indians, air people = Tibetans, snowy water kingdoms = Eskimos and/or Aryans), a plucky girl named Katara (Nicola Peltz), who can bend water, and a boy named Sokka (Jackson Rathbone), who can do nothing but say embarrassingly stilted things, stumble upon a bald young monk named Aang (Noah Ringer), who’s been frozen in ice for 100 years. Aang turns out to be the Avatar, a reincarnated being whose ability to wield nature’s four elements mark him as the chosen one destined to bring harmony to the world, as well as allow him to visit a spirit world that looks like a twinkly-blue forest and is populated by a giant talking dragon. Supposedly complicating matters is that Aang ran away from his responsibility before he could learn to master earth, water, and fire, not to mention that by fleeing (and getting himself stuck in a block of ice for a century), he inadvertently allowed the evil Fire Nation to run amok with their “huge machines of metal” in a campaign to destroy all traces of magic and conquer the globe.

If that description reads like a mouthful, let it be known that it only skims the surface of The Last Airbender’s narrative, whose abundant plot points and overcomplicated (read: tedious) mythology, which also concerns the fire empire’s Prince Zuko (Dev Patel) trying to restore his honor by capturing Aang, are explained through dialogue designed only for expository purposes. Shyamalan works so hard to clearly lay out his plot’s gobbledygook supernatural rules and regulations that the material goes inert, a situation furthered by performances that are wide-eyed and wooden (from the kids) and wide-eyed and over-enunciated (by the adults). Reading their lines as if every other word were underlined, and conveying emotions by making exaggerated faces (and, in star Ringer’s case, flaring his nostrils), the cast doesn’t act so much as “act,” emphasizing everything to the point of, well, cartoonishness.

Whereas its source material energized its longwinded story with animé’s typical hyper-drive action, Shyamalan’s film is incapable of staging even a moderately impressive combat sequence. Its battles are inundated by prolonged centerpiece panoramas—always in slow-motion, and so clunkily choreographed to account for post-production CGI that actors can be seen standing around waiting for their cues to move—that ultimately function more like demo reels than integrated parts of the proceedings. Shyamalan frames his fights in constricting medium shots that tend to overcrowd the screen, and indulges in innumerable, distended images of Aang and his mates waving their arms about in fluid martial arts poses while computer-generated water droplets and tornadoes appear in front of them. The effect is to further stunt an already challenged saga, one that becomes even more depressing once it becomes clear that the initial subtitle “Book One: Water” wasn’t to delineate this film’s various segments, but to position the proceedings as the first installment of a planned franchise.

Given the lifelessness of this opening go-round, those plans seem doubtful, though not quite as repellent as The Last Airbender’s 3D, which—added in post-production, à la Clash of the Titans—turns the visuals blurry, murky, and dull. Aside from a quick prologue montage of shadowy figures showcasing elemental powers, the extra-dimensional effects are an abomination, muddying the ho-hum 2D cinematography without providing any sense of heightened depth or contrast. Just as this throwaway kiddie fantasy definitively kills any further talk of Shyamalan as the heir to Spielberg’s pop-maestro throne, so too does its cheap cash-grab 3D hopefully further quicken the glasses-requiring technology’s demise.

A Movie a Day, Day 46: Border Incident and Bell Book and Candle