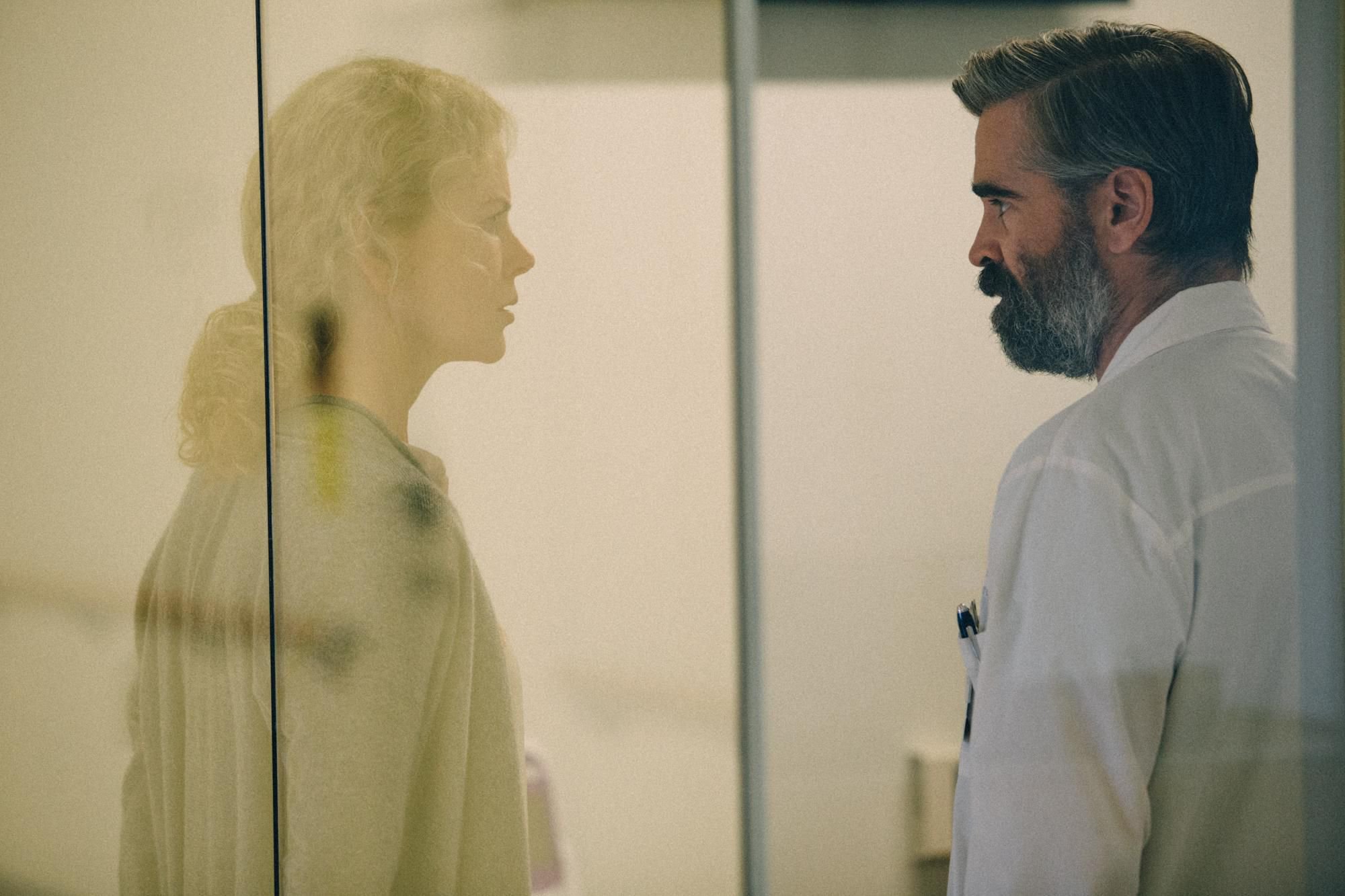 An open heart throbs as the orchestra swells. The camera slowly zooms out, revealing in big letters, like a billboard: The Killing of a Sacred Deer. With unrepentant bombast—and, one imagines, a smirk—Yorgos Lanthimos announces, in just the first shot, that this is his film, and he doubles down on the stylistic tics that define his polarizing work. Yet, in committing to his own established aesthetic and thematic tendencies rather than exploring their limitations, Lanthimos’s filmmaking regresses into something that resembles an homage to itself, an exquisitely crafted dead end. This proficiency is alluring, emitting a defiant confidence for a while—a stubbornness that has a certain ballsiness to it—until its hollowness becomes obvious.

Cardiologist Steven Murphy (Colin Farrell) and his wife, Anna (Nicole Kidman), have a beautiful home and two lovely children. At dinner they ask each other how their days were, and they have a routine in the bedroom that seems to suffice. Theirs is a “normal” marriage. Steven and his co-worker walk together down hospital halls, their banal chit chat tinctured with an ineffable strangeness. They discuss wristwatches, talking about the timepieces with the same insouciance as everyone does everything else. A teenager, Martin (Barry Keoghan), visits Steven at work, and they traipse to a scenic spot beside the Ohio River, the John A. Roebling Suspension Bridge stretched across the frame and the Cincinnati cityscape reaching up into the cloudy sky. Steven has a cigarette, despite his vocation being predicated on knowledge of cardiovascular health. He bestows upon Martin the same watch his co-worker has, and the teen monotonously thanks Steven. We later see Martin lighting up a cigarette and sucking at it clumsily: a boy emulating a man.

Martin, lonely and pernicious after his father’s death, clings to Steven, continuing the tradition of creepy young men named Martin begot by George Romero. Steven, we eventually learn, was the surgeon who may have killed Martin’s father while inebriated (the heart in the opening shot ostensibly belongs to the dead man). Soon, Steven’s son, Bob (Sunny Suljic), is afflicted with an abrupt and unexplainable paralysis, his legs rendered useless, though he seems unperturbed by this phenomenon. Here and elsewhere, the characters’ emotional vacancy, which served a potent idea in The Lobster, feels like another auteurist tic to which Lanthimos is dauntlessly committed; the stalwart weirdness for the sake of maintaining an aesthetic identity undermines his Herculean skills. The weirdness has become routine.

In the cafeteria, where the hands and minds of surgeons and doctors rest and replenish, Martin sits, hunched over, prattling in his droll voice about life and death. With his eyes glued to a table, Martin explains, quickly and mealy-mouthed, that Steven must kill one of his kin to atone for killing Martin’s father. Sitting before the expanse of windows, surrounded by so many reflective surfaces, Martin resembles a scryer, or perhaps a liar. Steven plays God, his hands giving and taking away life, and Martin is playing the devil.

Lanthimos’s demented sense of humor is steeped in violence and the lackadaisical reaction people have to violence. To make the deadpan sustainable, the actors need to be simpatico with the acedia underlying the violence, and only Farrell seems on that wavelength. There’s an ennui, and an easygoing idiocy to Steven, as with David in The Lobster, to which Farrell brings an empathetic dedication. He finds worth in the undignified pity of woebegone men. There’s never any hope that Steven will rectify his problems, that he has any idea of what to do. One watches him resign to the difficulties of the world. Kidman, who has an innate intensity, seems restrained by Lanthimos’s style: Her Anna is a caryatid of flesh, the cold, unwavering pillar that supports the tragedy, and one almost senses the actress struggling to not burst out in anger at the lunacy of everything happening around her.

The film, and the world it conjures, feel colorless and airless. It’s hermetically surreal. The hospital is antiseptic, a series of long white hallways and beige chairs and white jackets and beige chinos, gleaming windows and mirrors and halogen lights. Steven’s robust beard is black speckled with white, his flowing side part overgrown and gray. The sky beyond the windows is anemic. Everyone is white. The only bursts of color are Steven’s front door, which is blood-red, as is the eventual blood spilled, and the occasional splash of blue: the spiraled wallpaper of a friend’s kitchen, a swath of cloud-strewn sky settled over the river, and Kidman’s eyes. Lanthimos is fond of wide-angle lenses, the camera prowling, trundling, following or anticipating a movement with prescience, the characters often pinned in the corner of a crooked close-up or drifting in the negative space of a vaster shot. Captured frequently in low angles, the world feels like a film, ridiculous and illogical, the effect akin to looking up at a screen, as in Wojciech Jerzy Has’s The Hourglass Sanitorium.

Everyone here speaks as if words are foreign to them, as if they don’t understand their meaning but prefer the bemusing locutions to those moments of quietude that are pregnant with the promise of menace. In silence, characters adopt 1,000-yard stares, gawking at the world as if unsure of what to make of all of it. Lanthimos, too, seems to prefer befuddling sounds over the discomfort of silence: The operatic bursts of music, fans whirring and creaking, and aching synthesizers that sound as if they’re suffering a fatal stroke suffuse the film with an air of horror. In The Lobster, the overly dramatic score played at inappropriate moments, augmenting the sense of absurdity of a society that views traditional monogamous, binary relationships as necessary to meaningful existence (loneliness is scored like a horror movie, as if being alone is the scariest thing in the world), but here nothing really coalesces into a unified or provocative idea. Lanthimos is spinning his Kubrickian wheels. The craft is impeccable but in service only of itself and comes across as masturbatory as the literal jerk-off story that Steven delivers to his son, with straight-faced detachment.

Lanthimos’s thing is analyzing human relations and habits by expunging the emotional illogicality, and sex—in Dogtooth and The Lobster—has an insidious quality, an act of self- and mutual-destruction that’s necessary. The Killing of a Sacred Deer treats sex as an alien endeavor, sensorial but not sensuous, something people do but don’t necessarily enjoy. Steven tugs at himself through his boxers as Anna lies splayed on her back before him. The sound of Anna stroking a slick cock (not Steven’s) recalls that of a child slurping spaghetti a scene earlier. The arrival of a girl’s first period is announced, at a fancy party, with the same casual apathy as the declaration that Bob is starting piano lessons. The body and its myriad eccentricities is less a beautiful mystery than a grotesque inconvenience. The only time anyone is touched with passion or conviction is when Martin’s lonely mother (Alicia Silverstone) tells Steven that he has beautiful hands (the ones that killed her husband) and begins to suck them as if trying to get the meat off the bones.

Lanthimos, the most prominent export of the so-called Greek Weird Wave (a term that the filmmaker detests), has a deranged sense of humor, a moribund deadpan purged of emotional inflection but laced with operatic affectations that have the destructive effect of arsenic, the effusion of weird aesthetic flourishes slowly building up to something horrible. Yet, for the first time, he offers few surprises. It’s as if he reverse-engineered the entirety of The Killing of a Sacred Deer to arrive at an act of violence that feels contrived rather than inevitable. A tragedy isn’t tragic if its conclusion is devoid of emotion. It’s a meaningless pontification, no matter how eloquently delivered.