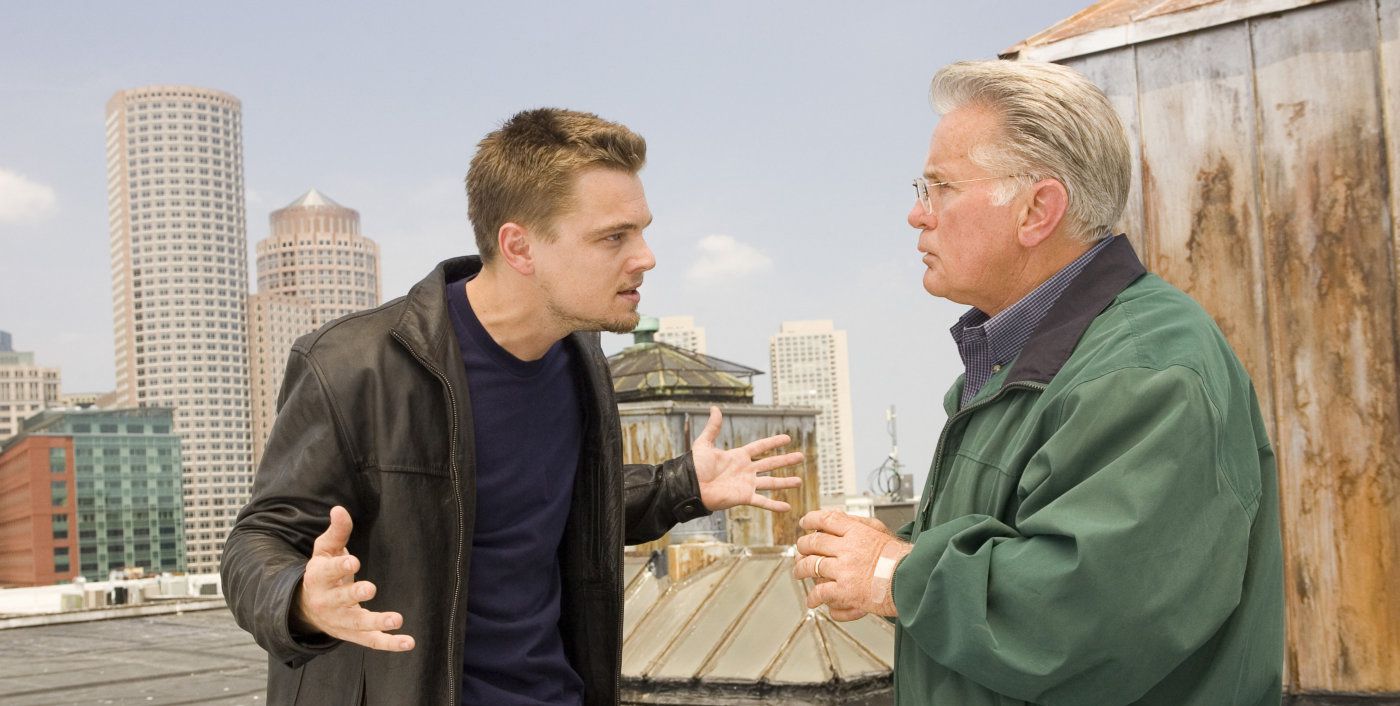 Remaking a 2002 Hong Kong hit and setting his story in the foreign territory of Irish-Catholic Boston rather than his familiar Italian-American NYC milieu, Martin Scorsese would seem to be out of his element with The Departed—if not, that is, for the fact that this tale of undercover cops and crooks is a return to the director’s bread-and-butter mean streets, and that his source material, Wai Keung Lau and Siu Fai Mak’s Infernal Affairs, was itself heavily influenced by his iconic gangster films. Something of a genre homecoming after recent detours into the arenas of the historical epic (Gangs of New York) and the period biopic (The Aviator), Scorsese’s latest once again finds him trawling a gritty, brutal urban underbelly where racial epithets spit from roughnecks’ mouths, class divisions are as sharp as a switchblade, and allegiances to others and one’s self are always tenuous at best. The Rolling Stones’s “Gimme Shelter” plays over a blistering opening sequence edited by Thelma Schoonmaker with gunshot-punctuated bursts that beautifully condense a wealth of introductory information, but there’s no safe haven to be found in this gray New England hellhole, a fact confirmed by the ensuing portrait of encompassing duplicity and paranoia, and vividly conveyed by Scorsese’s electrified direction, which initially proves as vicious, nasty, and deceptively sly as his saga’s larger-than-life Irish mob kingpin Frank Costello (Jack Nicholson).

With Michael Ballhaus’s coiled, constantly roving cinematography bringing a measure of unease to the underworld action, The Departed jumps out of the gate like a caged lion freed into the wild, delivering a rapid-fire primer on the congruent paths of state police academy trainees Billy Costigan (Leonardo DiCaprio), an intelligent recruit desperate to reject his family’s criminal past, and Colin Sullivan (Matt Damon), a careerist with political dreams and deep-seated ties to Costello. Sullivan is Costello’s mole in the police department and Costigan is the cop infiltrating Costello’s crew, and both are soon ordered to discover the other’s identity, a dueling-rats conceit William Monahan’s screenplay embellishes with trademark Scorsese preoccupations: Catholicism, double lives, issues of honor, honesty, and deceit, and the bond shared between fathers and sons. Faithful to its predecessor’s premise, the director’s adaptation nonetheless substitutes the original’s sleek, cool demeanor with a feverish, foul, funky energy that’s layered with a thin coating of sexual deviance (epitomized by Nicholson’s porn-theater dildo antics) and dysfunction (with Sullivan cast as the impotent son to Costello’s seriously virile papa). Deftly employing classic rock for clever commentary—never more so than with adjacent Nicholson and DiCaprio love scenes subtly linked by Pink Floyd’s “Comfortably Numb”—and swiftly crosscutting between multiple subplots, Scorsese’s film, for much of its 150 minutes, rocks violently, passionately, urgently.

As the story’s thematic backbone consists of Costigan and Sullivan’s parallel struggles to maintain identity and sanity, it’s DiCaprio and Damon who are asked to carry the brunt of the story’s emotional and psychological baggage, with the former radiating wounded-child scars beneath his exaggerated tough-guy exterior, and the latter expressing, during moments of silent contemplation, a sense of constant analysis and reconsideration. Much of their thunder, however, is stolen by their heavyweight supporting players, in particular Mark Wahlberg as detective Dignam, a one-note but hilarious hardass and insult maestro whose lower-class “Southie” ancestry manifests itself in no-nonsense appraisals of—and vulgar invectives aimed at—Costigan. Wahlberg and Alec Baldwin (as Captain Ellerby) share a vibrantly bawdy, rat-a-tat-tat rapport that’s Mamet-ese minus the pretension, and their humorous scenes together are smoothly balanced out by the stern, sturdy performances of Martin Sheen (as Costigan’s boss Captain Queenan) and Ray Winstone (as Costello’s viciously loyal right-hand man). On the other hand, Monahan’s attempt to generate gender equilibrium and romantic tension via the introduction of police shrink Madolyn (Vera Farmiga), who finds herself dating both Costigan and Sullivan, is a DOA endeavor; the character is such a contrived, under-dramatized device that even Farmiga’s impressively fierce turn can’t prevent the character from coming off as a pesky, phony annoyance.

Regrettably, Madolyn’s perfunctory role in Costigan and Sullivan’s cloak and dagger intrigue is symptomatic of the film’s eventual, aggravating plotting missteps, with its elongated twists and turns and multiple false endings interfering with, and finally diffusing much of, the first half’s high-wire ferocity and anxious tension. Worse than its narrative bloat, though, is Scorsese’s abandonment of his initial fast-and-hard approach to the material in favor of a grander operatic line of attack. What begins as a breakneck descent into blunt cruelty and moral turmoil soon morphs into a cat-and-mouse game encumbered by self-consciously overcooked extravagance, a tonal and stylistic shift that not only doesn’t quite suit the seemingly tongue-in-cheek Boston Massacre finale, but is compounded by Nicholson’s lurid shtick. Quoting James Joyce, cursing with racist glee, enjoying cocaine-drenched interracial threesomes, and licking squashed bugs off the palm of his hand, his is a routine of typically outsized Jack-ness that’s chillingly fearsome and daunting in spurts (i.e. when his gaze remains stern and his arching eyebrows remain lowered) but flamboyantly cartoonish in its entirety—a description that too often also accurately applies to the alternately scintillating, silly, and distended The Departed.