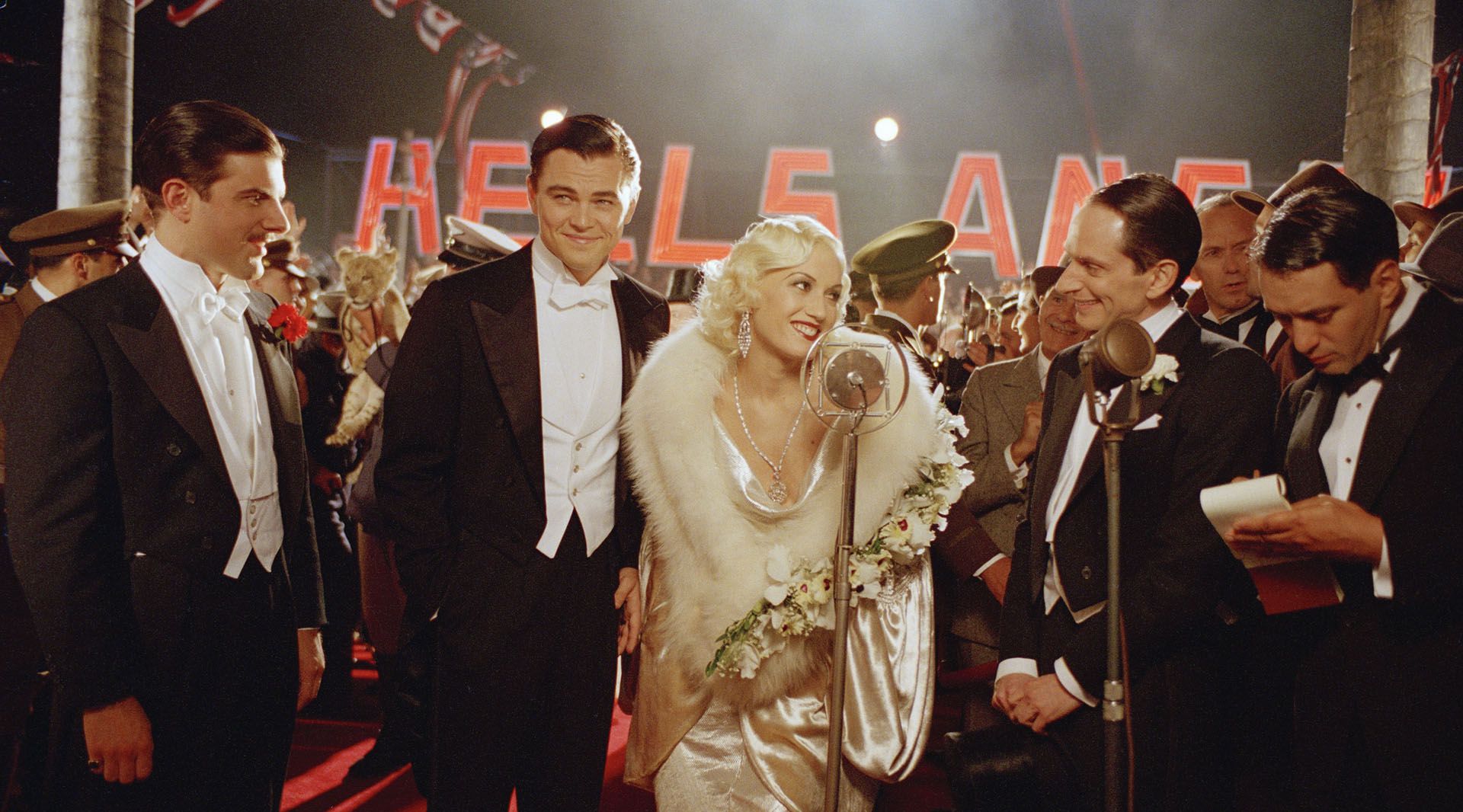 Martin Scorsese’s interest in would-be supermen struggling to reconcile their warring impulses reemerges in The Aviator, the director’s first-rate biopic of legendary moviemaker, airline magnate, and ladies’ man Howard Hughes. From Mean Streets’ Charlie Cappa to The Last Temptation of Christ‘s Jesus and Goodfellas’ Henry Hill, Scorsese’s protagonists are often men attempting to achieve great stature who cannot fully squelch, or at least come to grips with, their self-destructive urges. In Hughes, the filmmaker finds a titanic subject—equal parts daring risk-taker and unstable eccentric—whose greatness was intimately bound up with his mental disorders. Hughes’s Hell’s Angels was the most foolhardy and expensive film ever made, his wooden ship “The Hercules” was the world’s largest (and most useless) aircraft, and his relationships with iconic screen sirens Katherine Hepburn and Ava Gardner were doomed by his self-absorption and paranoia. And in this retelling of Hughes’s life from 1927 to 1947—the two-decade period encompassing his greatest successes as well as the beginning of his downfall—Scorsese makes clear how the audaciousness and perfectionism that made Hughes one of the world’s great financial giants and celebrities also ultimately contributed to his descent into reclusive insanity.

Scorsese opens The Aviator with a shot of a young, naked Hughes being washed in a basin by his mother as she indoctrinates him with a paralyzing terror of germs and disease, phobias which would haunt the man until his dying days. As embodied by Leonardo DiCaprio in a performance of focused bravado and maniac insecurity, Hughes is an obsessive-compulsive germaphobe who incessantly washes his hands, fears touching doorknobs with his bare skin, and has his dinner peas carefully organized in neat parallel rows. Such regimented neurotic behavior, however, was matched by an equally reckless, go-for-broke adventurism, and DiCaprio is at his best when depicting the swashbuckling foolhardiness of Hughes as he, having been wowed by The Jazz Singer, decides to shelve his two-years-in-the-making, multimillion-dollar silent version of Hell’s Angels and remake it as a talkie, or when the pilot and airline buff decides that the simplest way to further his commercial air-flight ambitions is simply to purchase TWA without first consulting his trusty advisor Noah Dietrich (John C. Reilly). The actor’s slender body seems a tad too boyish for the role, but Scorsese wisely keeps DiCaprio in expressive close-up so he can focus on his star’s piercing blue eyes (perpetually shadowed by a crinkled brow) and visualize the larger-than-life Hughes’s dominating presence and fanatical desire to conquer not only his competition but the skies themselves.

Scorsese (aided by Howard Shore’s rousing score) meticulously recreates the glitz and glamour of the ‘30s and ‘40s through a synthesis of old-school Technicolor vibrancy and modern CGI-aided extravagance, and only on occasion—such as a third-act projection of Hell’s Angels on the half-mad Hughes’s naked body—does the director’s fondness for classic Hollywood filmmaking technique cross the line into unintentional parody. A scene in which Hughes and Hepburn (Cate Blanchett, doing a bang-up job affecting the actress’s famous New England squawk and confident, manly gait) have their dinner at a rollicking nightclub interrupted by Errol Flynn (Jude Law) exhibits a lighthearted humor that’s all-too-frequently absent in Scorsese’s work. Still, despite cheekiness such as Hughes’s simultaneous diagramming of an airplane and Jane Russell’s brassiere (for The Outlaw, which the MPAA objected to on the grounds that it featured excessive cleavage), Scorsese’s film is most alive when depicting the irrationalism that increasingly gripped Hughes’s mind. As the businessman attempts to stave off the nefarious machinations of rival Pan Am president Juan Trippe (Alec Baldwin, thankfully not overdoing things) and his plot to monopolize international travel with the help of a corrupt senator (Alan Alda), Scorsese’s film becomes stormy and surreal, culminating in a disorienting, disturbing stretch in which Hughes locks himself inside a screening room, stops shaving and cutting his nails, and begins urinating in his collection of empty milk bottles.

Partially crippled by a horrific airplane crash after having previously set the record for the fastest flight around the world, Hughes eventually succumbs to his compulsions, but the film’s finest moment comes earlier during Hughes’s appearance at the world premiere of Hell’s Angels with Jean Harlow (Gwen Stefani), the film’s breakout star, on his arm. With popping paparazzi cameras startling the attention-adverse Hughes, a litter of used bulbs crushed underfoot as he makes his way down the red carpet, Scorsese—in a scene immeasurably aided by longtime editor Thelma Schoonmaker’s expert use of juxtaposition—brilliantly evokes the tumultuous, irreconcilable tension between Hughes’s grand triumphs and his inability to cope with the consequent stardom that accompanied them. “The way of the future, the way of the future,” Hughes repeatedly intones into the mirror during the film’s final shot, thematically linking the famed billionaire to Raging Bull’s Jake LaMotta and his rendition of Marlon Brando’s “I coulda been a contender” speech. Hughes may have achieved a level of success that the crazed LaMotta could only dream about, but The Aviator’s coda is nonetheless an apt reminder of the obsessive allure (and fleeting nature) of fame, and a stirring depiction of a great man’s tragic attempt to convince himself of future triumphs that would never materialize.