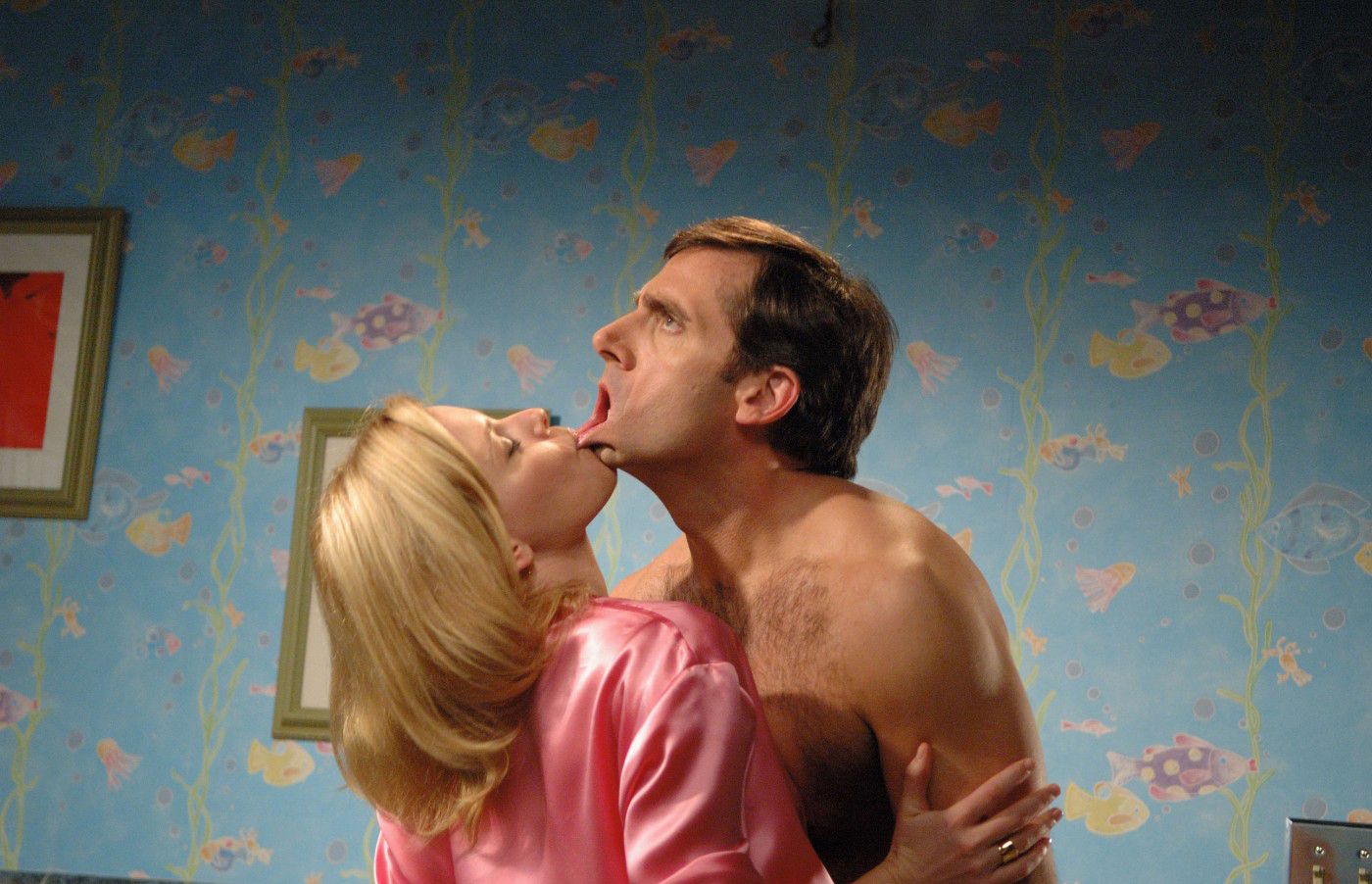 Living by himself in an apartment brimming with dorky action figures, video games, and posters of dragons and Asia (the band, not the country), 40-year-old Andy Stitzer (Steve Carell) is a leaner version of über-geek Comic Book Guy, though the reference point for Judd Apatow’s The 40-Year-Old Virgin isn’t The Simpsons (or Apatow’s cult TV show Freaks and Geeks) but rather Anchorman, Wedding Crashers, or any of their raunchy brethren. Courtesy of miscues, misfortune, and a healthy dose of nerdy spinelessness, Andy has made it through his first four decades without doing the dirty deed, and Apatow’s unabashedly raw comedy follows the chaste middle-aged man as he learns to love his libido with the assistance of booty-obsessed electronics store co-workers (Romany Malco, Seth Rogen, and the ludicrous Paul Rudd), who—before finding out about his shocking sexual inexperience—simply surmised that their peculiar, nebbishy acquaintance was either homosexual or a serial killer.

With an R-rated premise custom-made for pleasurably awkward erotic encounters and eye-poppingly filthy language, Apatow’s big-screen directorial debut repeatedly nails the lewd comedic G-spot thanks to Carell, whose maiden leading man role fits comfortably into the Daily Show alum’s burgeoning catalog of bumbling, buffoonish, socially inept dweebs. Radiating a frighteningly blank naïveté when it comes to the final female frontier, Andy is a maladroit man-child who thinks breasts feel like “bags of sand” and unironically uses the term “porked” when discussing sexual fantasies. And Carell (who co-wrote the indecent, yet frustratingly formulaic and safe, script) is funniest when maintaining a poker-face during dirty talk with a woman who wants to engage in some sensual pubic shaving (“I’m gonna shave your head…I’m gonna give you a buzz cut” is the smuttiest he can muster) or screaming stream-of-consciousness obscenities at a beauty parlor employee during a horrific chest hair-waxing-gone-awry.

Andy’s obsession with keeping his hermetically sealed collectible toys in their original packaging (so as to maintain their monetary value) rather than playing with them is emblematic of his unnatural refusal to make use of his regularly aroused appendage, though analysis of the amateurish Romeo largely consists of womanizing friend Jay’s (Malco) theory that Andy’s performance anxiety stems from “putting the pussy on a pedestal.” As with Wedding Crashers, The 40-Year-Old Virgin runs a half-hour too long, resorts to tired stereotypical bits about blacks and gays, and, after offering up a tasteless barrage of bawdy male-centric crudity, eventually succumbs to sweet, conservative romanticism—via Andy’s tender relationship with a “hot grandmother” (Catherine Keener, trapped in bland love interest purgatory)—in which casual sex is declared creepy and unfulfilling when compared to coitus with a loving soul mate. Killjoy pro-monogamy pap, however, is nonetheless a minor price to pay for the gratuitously gross sight of a just-awakened Carell peeing on his own chest and face thanks to some disobedient morning wood.