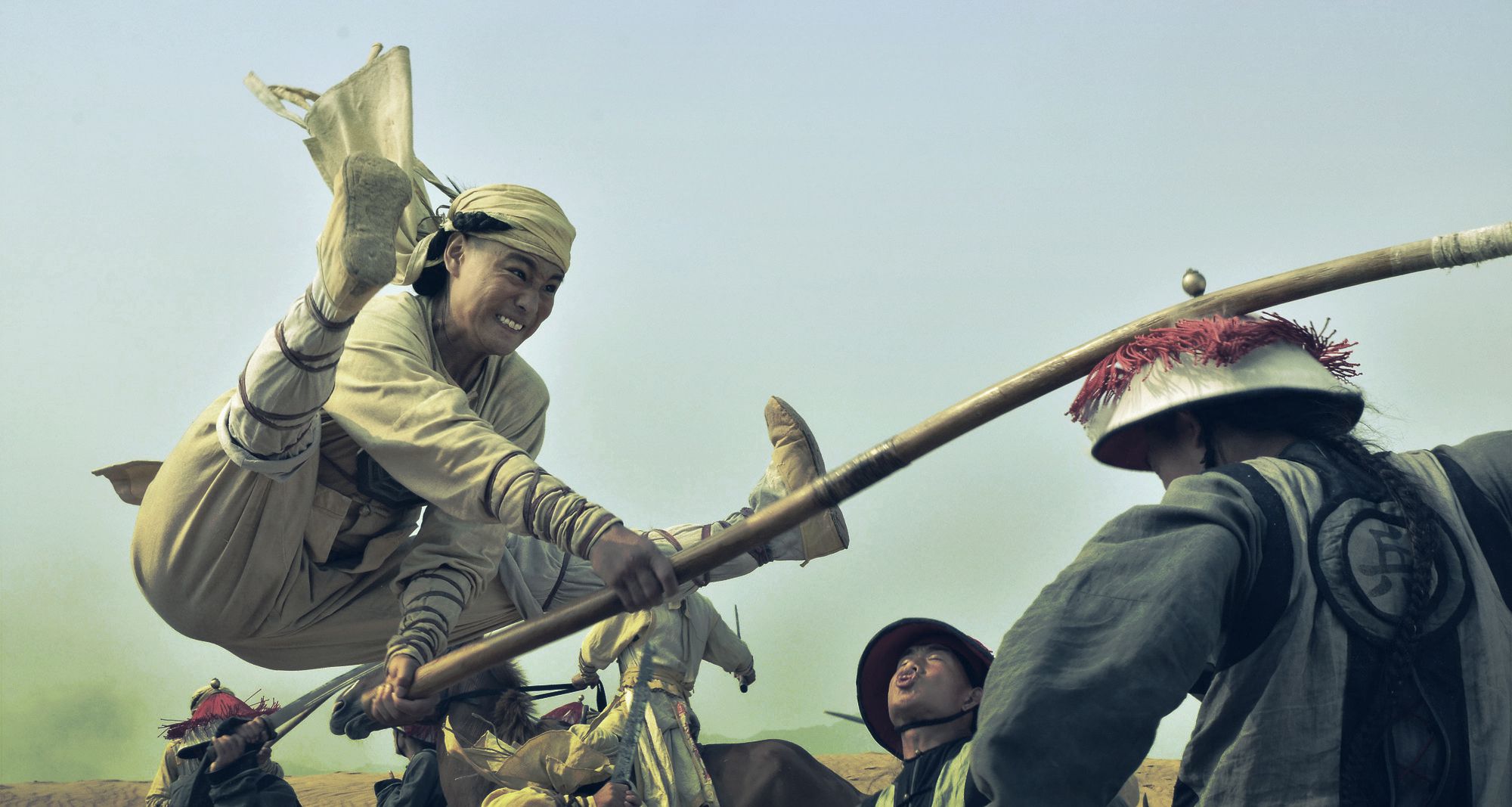 Essentially a live-action anime, Stephen Fung’s Tai Chi Zero sweats rivulets of Tarantino-era digital anxiety from all pores—every kick, punch, pan, and zoom exaggerated for maximum impact. The camera wants to go everywhere and annotate everything; no scene avoids being stopped dead in its tracks with some kind of postmodern wink at the audience, usually a shout-out to your standard-issue video-game interface. The story kicks off with hellish metal riffs backing a gold-tinted war scene wherein our hero, described in voiceover as “The Freak” (Yuan Xiaochao), takes a blow to the head that sends him into a rage of kung fu. As it turns out, he’s a prodigy at it—as long as he gets hit on a specific wart on his forehead.

Bumbling along the countryside, the Freak wanders into a small mountainous village and finds the citizenry there practicing Chen-style kung fu; he gets his ass handed to him by nearly everybody he tries speaking with. Tai Chi Zero is something of a pageant of celebrities from Hong Kong and China, and the big man in town is the mysterious Master Chen (Tony Leung Ka Fai). (Incidentally, for a small cameo the camera freezes on Andrew Lau and a title card declares: “That’s Andrew Lau! Director of Infernal Affairs!”) Chen is bound by law not to teach his technique to any outsiders, which makes the Freak simultaneously a threat and an outsider with no means of breaking in. To make matters worse, the Freak has a crush on Master Chen’s daughter, Yuniang (21-year-old singing/acting/modeling sensation Angelababy). She, too, beats him up, but it’s nothing personal, a kind of a meet-cute with long stares and soaring trumpets. The Freak manages to redeem himself when Yuniang’s fiancée, Fang (Eddie Peng), returns to the village from an education abroad in a top hat, with the blueprints and the muscle to lay down pioneering railroad tracks. The Freak’s forehead growth, meanwhile, grows black, sapping him of his energy and slowly killing him unless he realizes his full potential.

Redemption comes in the form of stopping needless Western modernization; the love triangle quickly proves a non-issue as Fang falls in love with one of his white henchwomen in a series of long, unbelievably stilted love scenes in dubbed-over English. Accidentally or otherwise, viewers will find themselves rooting for the Freak’s two new relationships—one under Chen’s mentorship, the other with Chen’s daughter—and anxiously awaiting the next big martial-arts scene. Maybe betraying its market ambitions, Tai Chi Zero toggles between syrupy melodrama and crunchy violence pretty comfortably, regularly breaking the fourth wall to call out its characters’ intentions for an easy laugh. The film seems to exist beyond history, factual or cinematic.

The film invites comparison to Stephen Chow’s work, but Fung and his crew have no interest in Chow’s meticulous choreography or eye for stark composition. Shots are short, shallow, and glitzy, and fight sequences are chopped up one blow at a time—or, worse, chopped up and digitally augmented, a la House of Flying Daggers. While the plot is as simple and time-honored (read: flimsy) as has ever existed in martial-arts movies, there’s a semi-admirable, ultimately deadening impatience to the movie’s flow. Tai Chi Zero ends practically mid-scene, only to run a two-minute long trailer for its already-shot sequel, Tai Chi Hero, over its sped-up end credits. The edit probably got a lot of laughter from the filmmakers, but the movie never takes its flippancy to the point of daring.

Interview: John Hawkes on The Sessions

BFI London Film Festival 2012: Death of a Man in the Balkans and Clip