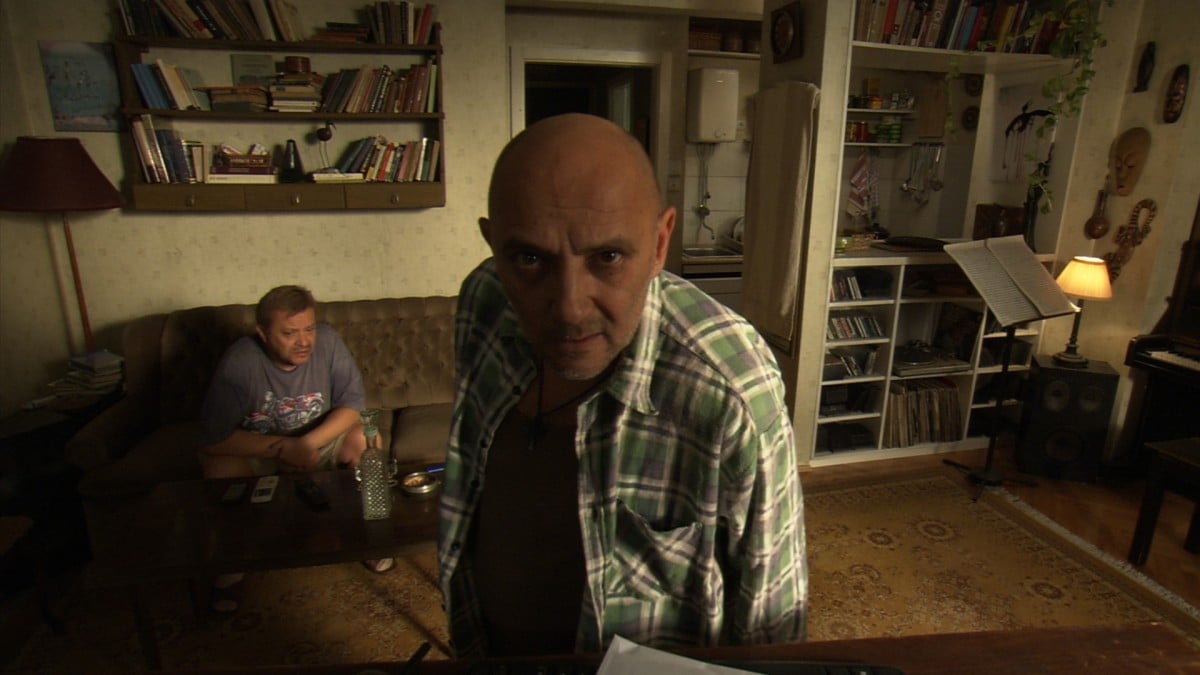 Serbia has one of the most extraordinary recent histories of any European nation. The horrors faced by the country’s people, some of whom are now still only in their teens, is unimaginable. Throughout the 1990s, the government, through its paramilitary and military, was involved in atrocities ranging from genocide and systematic rape to torture and persecution of all sorts (religious, political, sexual, racial, and ethnic). Serbia enforced conflict on its peoples, and desperate and megalomaniacal political figures are guilty of abusing the developing psyche of this young nation.

In a similar conceit to The Death of Mr. Lazarescu, Miroslav Momčilović’s Death of a Man in the Balkans records the communal reaction to the passing of a recluse. The film opens with a flash of non-diegetic violence; as the film’s title appears on screen, the eponymous figure puts a bullet through his head. Because he deliberately left his computer’s webcam on, the audience sees as his body is attended to by nosy neighbours: an overzealous undertaker, a real estate agent with a potential buyer, paramedics, a pizza delivery man, the police and a crime scene investigator. A Kammerspiel in the traditional sense, Death of a Man in the Balkans is theater of the absurd, a farcical black comedy that’s light on the black, heavy on the comedy, and exceptionally reliant on the farce.

Another Serbian film being shown at this year’s BFI London Film Festival is the highly contentious Clip, the first feature by 29-year-old writer-director Maja Miloš. The film has been the subject of debate since its premiere at the Rotterdam Film Festival in January, where it won two awards, including the main prize. Recently banned in Russia under charges of explicit imagery and child pornography (charges that the filmmakers unreservedly reject), the film is one of the most fiercely confident feature debuts in recent years. The loose plot tracks Jasna (Isidora Simijonovic), a bored teen, as she attempts to seduce Djole (Vukasin Jasnic), the local alpha-male jock, all the while trying to cope with straining familial relationships in the shadow of her father’s fight against an increasingly aggressive cancer. Through this all, she records everything on her ever-present camera phone, compartmentalising her life into bite-sized clips—her keepsake memories, or perhaps memories that she keeps only for the sake of keeping. Largely, Clip is an exploration of how Jasna, an everyday teen of almost melodramatic cliché, copes with the stresses of a suddenly adult comprehension of a worldly reality.

Though their stories have very little in common, Clip and Death of a Man in the Balkans are both strongly keyed to a nation’s modern identity. Similarly, last year’s Parada, about a gay couple attempting to organise a gay-pride event in Belgrade, relied on subtle stereotypes and clichés to deconstruct common social conceptions about life in Serbia. As the film’s director, Srđan Dragojević, revealed in an interview with the German magazine Der Spiegel, he makes “films for the so-called man on the street.” In each of these films, the modern Serbian is presented as largely self-gratifying, justifying his or her actions and beliefs with a victim’s sense of entitlement. To varying extents, all examine what privilege means within a civic context (Dragojević also admits to making Parada through a sense of civic responsibility).

You may also remember A Serbian Film, which was banned in Norway, Spain, Brazil, Australia, and New Zealand, as well as denounced in its home nation. Plenty has been made of its on-screen horrors, but few have thought about its conceptualisation. Contemporary Serbian cinema is, at present, rich in oneiric symbolism and in a startling, vibrant process of rapidly evolving self-psychoanalysis. It is a specious concept to judge these films based on what comprises them. The stories that emerge have no responsibility to be neat, linear, or palatable. However, they must be honest, and these films are nothing if not that.