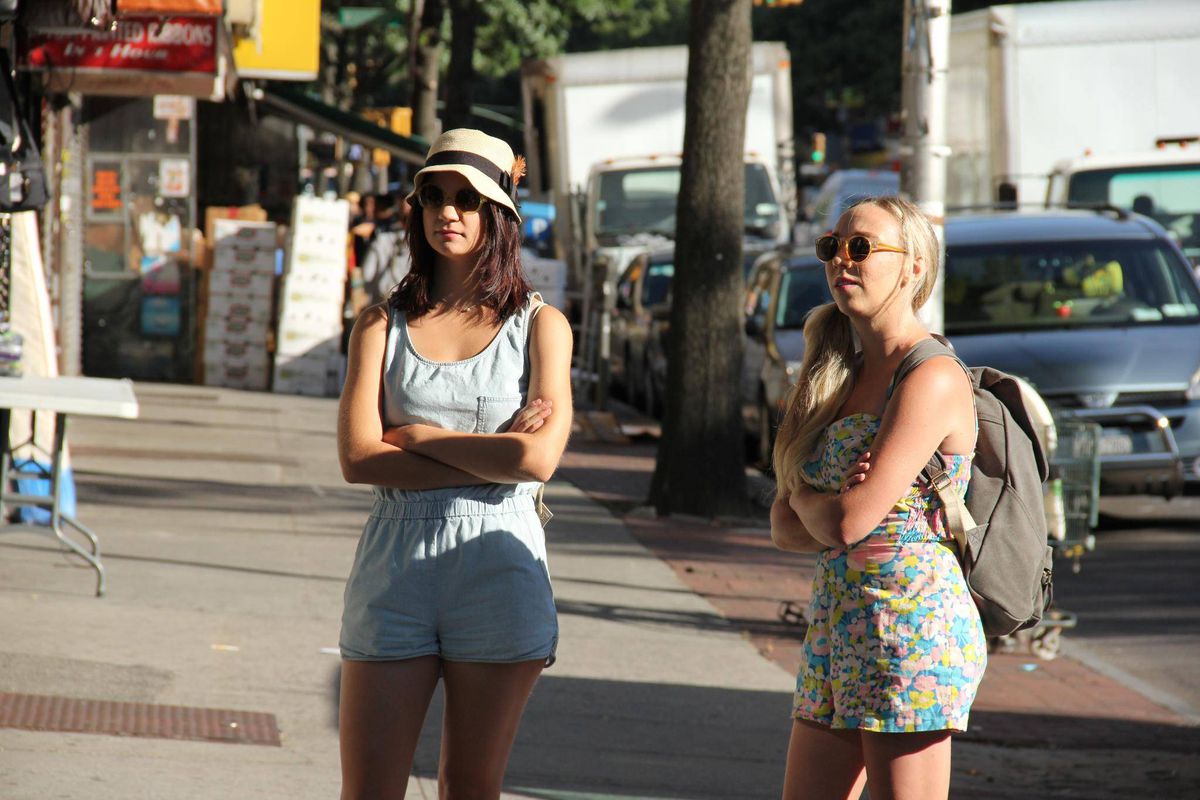 Self-involved twentysomethings living off their parents dime in Williamsburg are easy targets for derision, and Charles Rogers and Sarah-Violet Bliss sharply aim their arrow at their bullseye throughout their debut feature Fort Tilden. Structured as an episodic road trip to the eponymous hipster beach destination, the film focuses on roomies Allie (Claire McNulty), a wannabe humanitarian struggling to prepare for a trip to Liberia for the Peace Corps, and Harper (Bridey Elliott), a snappy daddy’s girl exhausting her wealthy father’s bank account while half-heartedly pursuing her work as an artist. With drugs in tow, and harboring idealized hopes of romantic coupling once they reach their destination, the two suit up in their bikinis and rompers and start the journey on bikes. Given their general obliviousness, a simple trip through Brooklyn turns into an odyssey of self-inflicted mishaps.

Though built around the mounting tension in Allie and Harper’s questionable friendship, the story’s exaggerated scenarios—involving unsatisfying iced coffee, opportunistic cab drivers, brownstone-dwelling Brooklyn breeders, abandoned kittens, and so on—mostly situate Fort Tilden as a hit piece, targeting the irresponsibility of a group of individuals more likely to toss-off an elaborate, reference-filled one-liner than balance a checkbook. There are moments that pointedly critique the pair’s cluelessness as being rooted in consumerist pathology: Allie learns how to pump a tire from a young boy’s YouTube video, and the twosome simply provide a commentary track without springing to action as a young boy steals one of their bikes. But Fort Tilden too frequently relies on overgeneralizations and caricature to build its sardonic takedown of its character’s solipsism. As the film reaches its home stretch, the girls are wounded versions of their former selves, with the filmmakers limply trying to elicit pathos for the unsympathetic buffoons they’ve spent 85 minutes taking down. Ironically, it’s in the film’s own displays of flippancy and contradiction that it comes closest to illuminating the myopia of millennials.

Dependency and desperation lie at the brazenly beating heart of Collin Schiffli’s Animals. Bobbie (Kim Shaw) and Jude (David Dastmalchian) are a couple living primarily out of their car outside Chicago’s Lincoln Park Zoo, as reliant on heroin as they are on each other. To support their addiction, they deceive and thieve others on a scale from petty retail theft to elaborate con jobs, from stealing and reselling CDs to Bobbie posing as a high-class call girl. In their more introspective moments, they muse about their fortunate upbringing and their wasted potential (“You know we were born in the best circumstances,” Jude observes), but the script, written by Dastmalchian, a recovered addict, never wallows in self-pitying moralizing. What holds the film together as it jumps from one heartbreaking score to another is the alchemy of its performances, which show a fierce and unflinching commitment to the shameless acts of conning that exhibit the creative energy Bobbie and Jude are capable of. Given their pseudo-bohemian costume choices, the leads could be mistaken for Urban Outfitters models, but there’s scant vain posturing to their thesping; they never let their attractiveness overshadow—or, worse, glamorize—the authentic grit of their characters’ vicious self-destruction.

The film’s title is taken from frequently utilized crosscutting juxtapositions between the characters and the animals that reside in the zoo across the street from the couple’s car. Meant to literalize the self-sustaining, animalistic urge of survival addicts face on a daily basis, it’s a flashy layer that come off as overwrought, as the clear-eyed and naturalistic portrait of reliance needs no added metaphorical highlighting. With a shift in the third act that separates the couple, Animals slightly gives into the didacticism that it so cunningly avoided up to this point. And yet it remains a lucid, psychologically complex depiction of a path to redemption, and the final act functions as a satisfying reprieve not just for the protagonists, but also the audience that has been immersed in the tragic and torpid lengths of depravity addiction breeds.