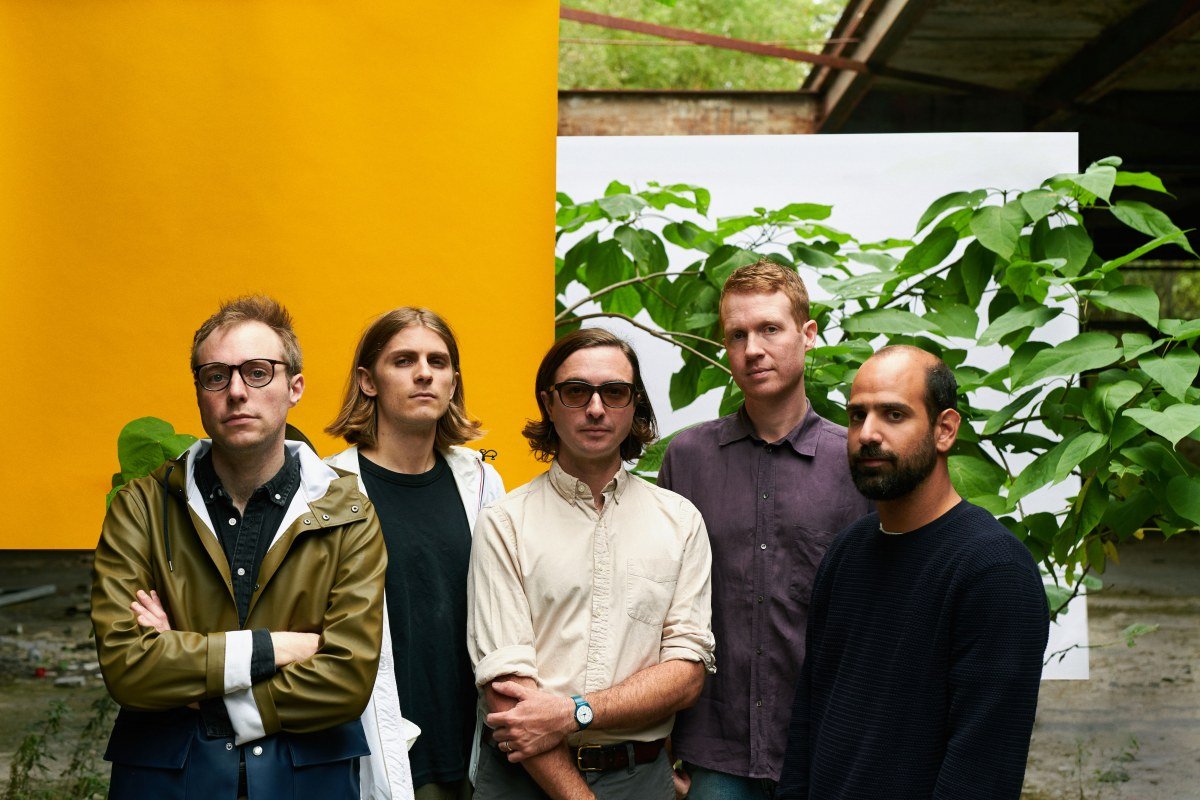 There’s undoubtedly something a little weird about seeing rock music in a strangely lit, tackily carpeted convention center ballroom, but by day three of the music portion of SXSW, there are a few advantages to the Radio Day Stage in the Austin Convention Center: namely, air conditioning, free water, comfy seating, $7 pizza (not too bad by SXSW standards), and plenty of outlets to huddle around with a gaggle of battery-depleted compatriots. Not to mention the stellar lineup that radio stations like KCRW have assembled for their showcases. Yesterday alone featured Lost in the Trees, NO, Real Estate, and Dum Dum Girls.

I caught the latter two in the early afternoon and was duly impressed by both bands’ ability to keep the energy level high inside the laconic ballroom setting. Real Estate kicked things off with their super low-key dreamscape rock. “In lieu of a set list, we’re just going to play through our new album until they tell us to stop,” singer Martin Courtney informed the approving crowd. The band’s tempo and tone remained steady throughout, with every chorus nailing lovely echo-chamber harmonies. The vibe went over nicely in the soothing indoor venue, but I imagine the band wouldn’t have had much trouble rousing a rowdier outdoor crowd either. Opening with “Are You Okay?” and looking as if they’d just stepped off a runway in mini hot pants and fishnet tights, the four Dum Dum Girls (and one black-clad male guitarist) mainly stuck to new material, giving off an all-business affect and keeping banter to a minimum as audience members nodded along generously.

Back out in the heat, singer-songwriter Lydia Loveless put some serious rock muscle behind her brassy country, sporting a leather jacket, a fiery orange dye-job, and a bowler hat that promptly fell off as she threw her head back to belt out her set. She took a few breathers between songs to teasingly call her drummer a “bitch” and to mutter an audible stream of expletives while wrestling with a botched tuner.

An around-the-block line eagerly anticipated San Fermin closing out the day session at Red 7, and I was lucky enough to squeeze in just as they were performing “Sonsick.” On tour, the orchestral-pop group scales down from the 22 musicians who performed on their debut album to a leaner eight-piece ensemble, still managing to create a lush swell of brass, strings, keyboard, and percussion while loosening up on stage during vigorous late-song breakdowns. Rae Cassidy, who replaces the duo Lucius on tour, threw down Mariah Carey-esque vocal trills while Allen Tate’s hypnotic baritone rounded out their duets. The band complemented older material with a newer, slightly gothic offering and an innovative cover of the Strokes’ “Heart in a Cage,” replacing that band’s relentless and somewhat monotonous garage guitars with a more dynamic arrangement.

Two string-heavy ensembles entranced a crowd seated in the pews of the Central Presbyterian Church last night, where the presence of teenaged youth-group volunteers selling candy and bottled water provided a welcome alternative to the amenities of some of the grungier SXSW venues. The church’s vaulted ceilings enabled truly exceptional acoustics that were perfectly suited to Mother Falcon, a 14-strong camber-pop group who combine vocal vibrato with rich cello parts and pizzicato violin picking to create a symphonic texture on songs like a gasp-inducing cover of Radiohead’s “Paranoid Android.” Later that night, Typhoon played somewhat scaled-down versions of their baroque pop songs, with frontman Kyle Morton bringing an almost existential level of earnest commitment to lyrics largely concerned with illness and death. The set provided an appropriate opportunity for the church’s pastor to invite the crowd to partake in two minutes of silence in memory of the lives lost in the previous day’s car crash, a tribute observed at midnight by every SXSW venue across Austin.

Finally, one of the most buzzed-about bands at SXSW, London Grammar, wrapped up the Hype Hotel’s night party, where lines can be prohibitive, but Tito’s-based mixed drinks flow freely once you get inside. Bodies packed together while Hannah Reid and her two baby-faced bandmates projected impressively mature electro-pop throughout the warehouse venue. Female-fronted synth-based bands are truly a dime a dozen at SXSW this year, yet there’s something noteworthy about Reid’s huge vocal range and ability to slide upward from a resonant lower register to a controlled high vibrato. Despite her sultry delivery, Reid was dressed like a teenager at a sleepover in a high ponytail and sweatshirt, and she frequently took moments during her spot-on performance to smile at girls in the front row. When multi-tasking instrumentalist Dot Major, a dead ringer for One Direction’s Harry Styles, informed the crowd that of the band’s many Austin shows this was “by far their favorite,” the crowd reacted as if it had received some kind of divine blessing. As hard as it is to remain engaged at 2:30 a.m. after being on one’s feet for what feels like an eternity, London Grammar absolutely earned the few hours of sleep that I might have otherwise fit in.