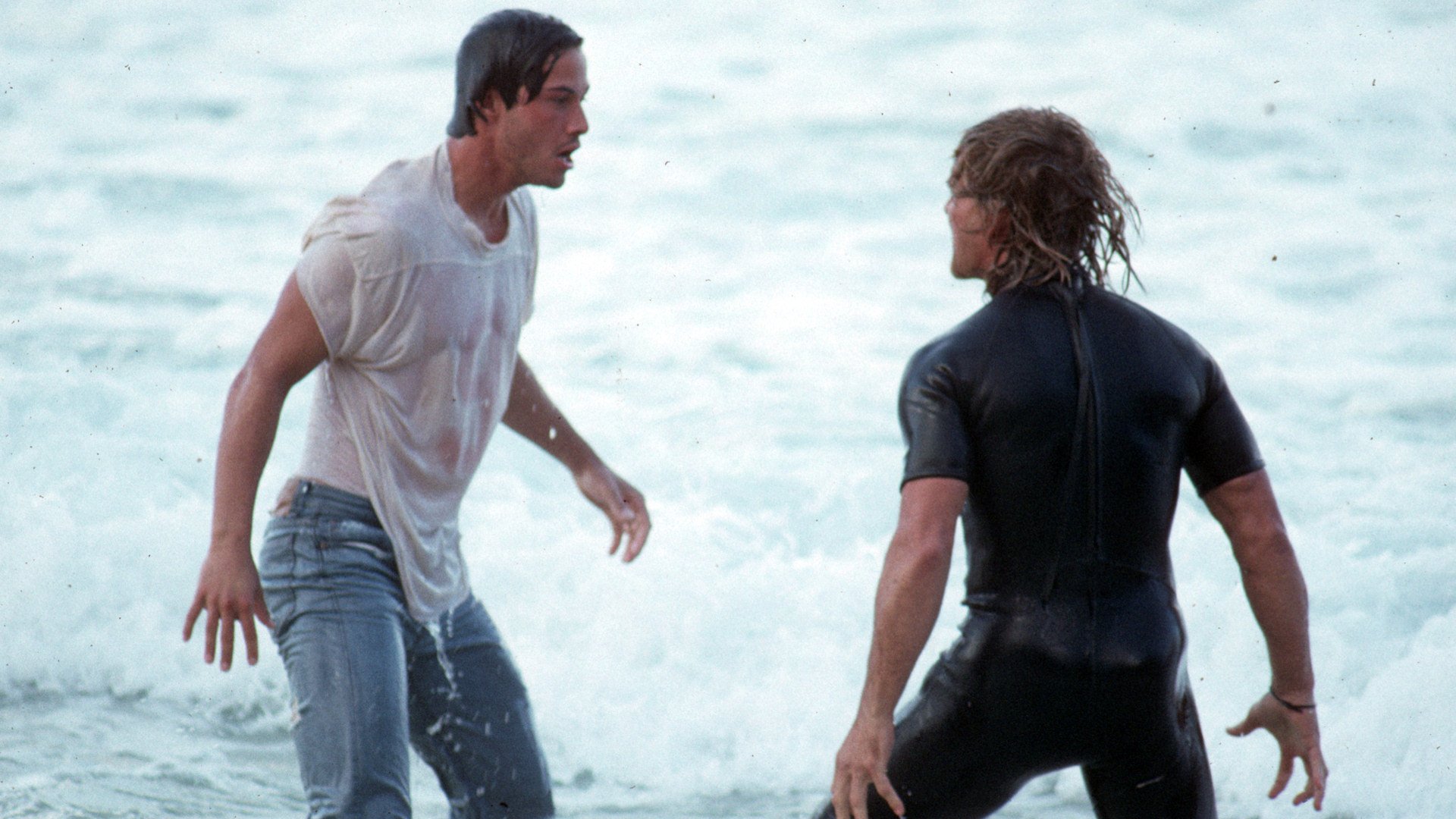 In the summer of 1991, the received wisdom on Kathryn Bigelow—especially in the wake of Point Break—was that she was a rising star, making a mark on Hollywood where other women directors had not, by applying her talent to traditional action genres. Here was a woman who made men’s films, not women’s, and was rewarded for it by both critics and the box office.

Those turned out to be half-truths. Today, anyone who’s been paying attention can see that in adopting the male gaze, and in making two films in which women barely mattered and one in which they barely appeared, Bigelow wasn’t selling out, but was illuminating more about women than a dozen “women’s movies” ever could. It wasn’t about making it in a man’s world; it was about confronting and puncturing the eternally adolescent self-importance of “men’s work”—sabotaging not only the buddy action movie, but the whole testosterone-soaked world of moviemaking both on screen and off.

Johnny Utah was a perfect role for the Keanu Reeves of 1991, part the vulnerable adolescent of Tim Hunter’s River’s Edge, part the clueless valley boy of the Bill and Ted films. Utah is every inch the rookie—“young, dumb, and full of cum”—described by his section head, Harp (John C. McGinley), even if he gets the best of Harp in his asides and eventually in his job performance. Point Break suffers from a little too much dialogue, but it’s mostly because Utah feels the need to be constantly explaining things—to anyone who will listen, or to himself if no one will.

Utah is constantly under attack, from Harp and his partner, Pappas (Gary Busey), to Bunker Weiss’s gang of territorial surfers, and frequently by women: Tyler (Lori Petty), whose verbal assault saves him from drowning and hubris, and who later comes at him with a gun when she discovers he’s lied to her; in the raid on Bunker’s gang, by a knife-wielding woman come naked from the shower (in a delightful reversal of Psycho’s most iconic scene); and in the celebrated foot chase, by a housewife who pummels him with her fists and then throws her dog at him. He endures all this, but doesn’t seem to learn from it. Impulsive, even heroic, Johnny Utah is nevertheless hapless from beginning to end, his male competence always in question, as neatly capsulized when the Ex-Presidents, the gang Utah and Pappas are aching to catch, pull off a fully anticipated bank robbery in the shallow-focus background as Utah, foregrounded with his back to them, buys meatball sandwiches.

While Tyler continually gets the best of Utah, she steadily fades into the film’s background. Starting the film as a tough, damaged woman like Telena in The Loveless, Mae in Near Dark, Meghan in Blue Steel, she’s harder than Utah for a good while. Then she melts, gets kidnapped wearing only a slip, is increasingly weakened, feminized, and ultimately dismissed before a final chapter that doesn’t even acknowledge her existence. This isn’t the cop-out of a woman director devoted to making men’s films; it’s a coup in Bigelow’s early exploration of men’s love of themselves and one another to the exclusion of any serious involvement with women. (She’d eventually drop the other shoe with a couple of woman-centered films that provide important keys to her vision: The Weight of Water and Zero Dark Thirty.)

An overhead shot of Johnny and Tyler in bed echoes a similar shot of Telena and Vance in The Loveless—in both cases stressing the androgyny of both lovers. Not much later in Point Break, Johnny tries to tell her something. We know he wants to reveal his cover to her; she thinks he wants to confess his love (and that’s probably part of it too). “Men are so bad at this,” she says, when he has trouble finding the words. “Another time.” The moment is lost, and not much later than that she’s on him with a gun, angered because he lied to her. It’s her last important moment in the film, and it’s a true one, though not in the way she thinks.

She has been betrayed, but not by lies. Back when she brought Johnny to Bodhi (Patrick Swayze), her ostensible one-time boyfriend, Bodhi took her aside and asked: “Are you replacing me?” But as it works out, Tyler is the one who’s replaced. Johnny is beguiled by the mystery and magic of surfing, and initially transfers that beguilement to Tyler. But it’s really just part of the job—until he becomes captivated, spiritually and physically, by Bodhi himself. Pappas (far too late) cautions him about “getting too close to that surfin’ buddy of yours.” Whether surfing or chute-sharing, playing beach football, mock-fighting or real fighting, Johnny and Bodhi define their relationship in physical terms, with Johnny always in hot pursuit, to the point where Bodhi says, “I know you want me so bad it’s like acid in your mouth”—and they both know he doesn’t just mean getting arrested—“but not this time.”

Bigelow cues us to the bonds that connect Johnny and Bodhi from the very opening of the film: As Mark Isham’s music whispers water and mystery, the words POINT and BREAK emerge from opposite sides of the screen, move toward each other, merge, then separate, changing places. And then the names of actors Keanu Reeves and Patrick Swayze do the same. The music crescendos as waves crash and we see a surfer riding the pipeline of a big one. In pouring rain, a hot and hungry young F.B.I. recruit works Hogan’s Alley. The crash of gunfire echoes the crash of waves. Both characters are associated with water. The surfer chooses the water; the cop has it thrust upon him. The cop merely endures the rain while the surfer masters the waves. For one, it’s an obstacle; for the other, a supreme harmony. Two guys, good at what they do, one in time, one out of time.

Time is critical in Point Break, partly because catching on to the seasonal nature of the Ex-Presidents’ m.o. validates Pappas’s theory and enables him and Johnny to finger the right bunch of surfers after the disastrous false-positive of the Bunker gang, but mostly because, as Bodhi says, “life’s short.” Tyler consents to teach Johnny “a few things,” but ties the lesson to punctuality: “Six a.m. If you’re late, I’m gone.” Sleeping late after a night on the beach, Johnny shows up late for his own raid. Postponing his confession to Tyler until “another time” ends up having dire consequences. Inopportune phone calls, doorbells, and alarm clocks interrupt key moments of the film, jerking the action and Johnny in unexpected directions—and of course the big interruptus is the fact that Johnny has to wait until next year for his ultimate shot at Bodhi, stressing how inextricably in time Johnny is, and how futile is his quest to live, in the scant minutes of a wave ride or a skydive, the same life out of time as Bodhi (whose name, Bodhisattva, identifies him with the eternal seeker of enlightenment in Buddhist philosophy).

Of course, even Bodhi isn’t able to sustain his mystique. The Johnny-Bodhi relationship is limned in Bigelow’s customary off-balance one- and two-shots. When Bodhi has the upper hand and Johnny has been fully outed, Bodhi’s one-shots put him in a comfortable space, with equipment and his fellow Ex-Presidents sharing the frame; Johnny shares his one-shots with encroaching darkness. But as Bodhi deteriorates in the face of Johnny’s urgency, Johnny gets more and better space in their two-shots.

At Bodhi’s party early in the film, Tyler disses the hangers-on: “Big wave riding is for macho assholes with a death wish.” But Bodhi justifies his quest of the 50-year storm: “If you want the ultimate you gotta be willing to pay the ultimate price. No sacrifice to die doing what you love.” For him, it’s not the orgasmic pleasure of the passing moment; it’s the ultimate harmony, the unification of earth, sky, sea, the melding of the body into nature. Death. Yes, it’s a death wish after all, and when he witnesses death as a reality rather than as a Big Idea, he starts to come apart. By the end of the film, he’s reduced to begging. And Johnny, who’s finally come to terms with the fact that he can neither be, nor have, Bodhi, lets him go, delivers him up to the eternal sea, and joins Will Kane and Harry Callaghan in throwing away the badge of enforcer. That kid in the surf shop back toward the beginning of the film wasn’t half wrong: “Surfing’s the source, man. Change your life, swear to God.”

Robert C. Cumbow is the author of books on John Carpenter and Sergio Leone. His work that originally appeared on 24 Lies a Second and House Next Door and in Movietone News is archived on The Parallax View. In addition to teaching and writing about film, he practices and teaches intellectual property law in Seattle.

M83-Scored Trailer for A Monster Calls Summons Another BFG