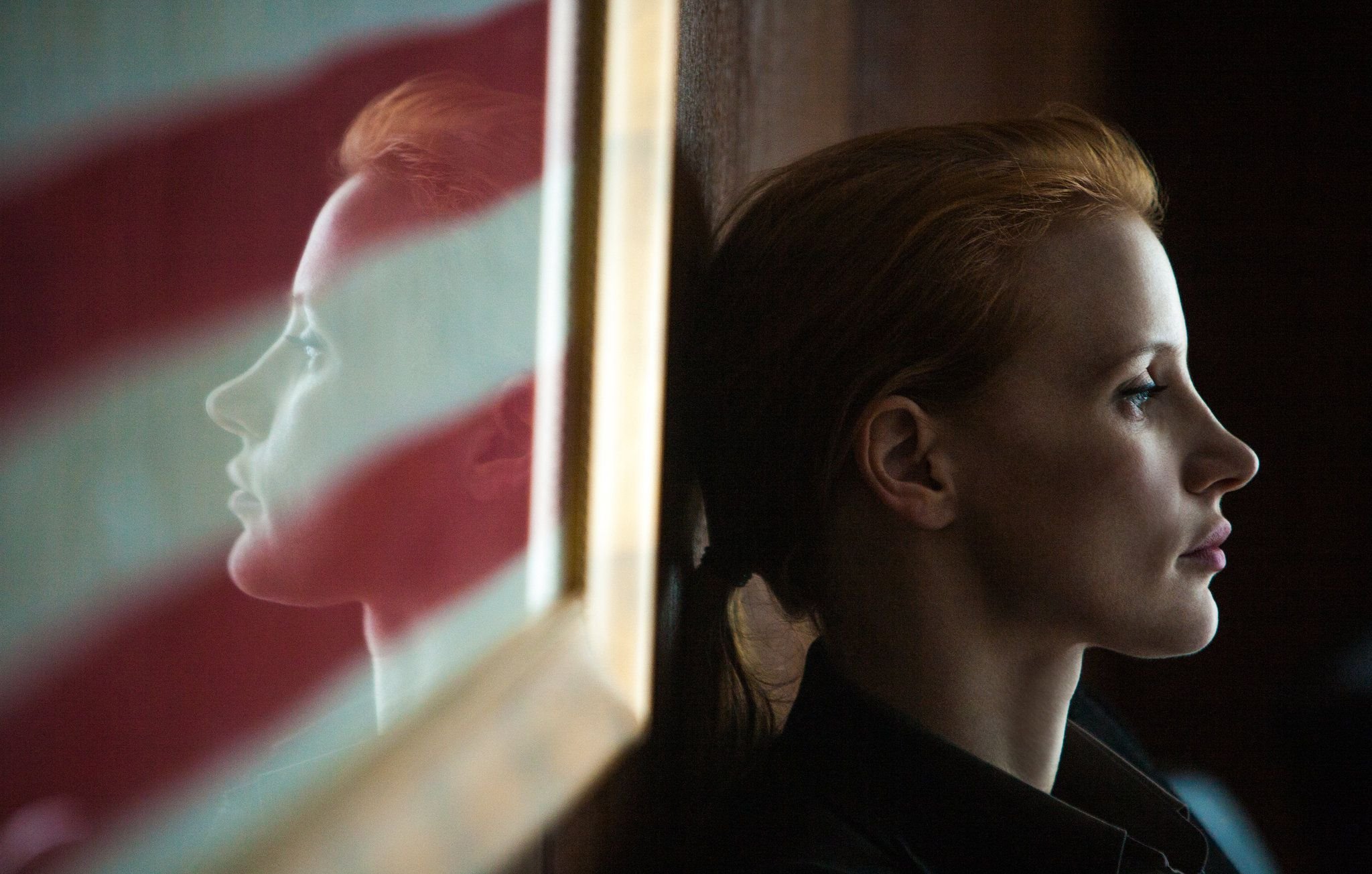 The song that’s blasting when two C.I.A. operatives (Jason Clarke and Jessica Chastain) enter a secret prison black site in Pakistan to roust a battered, sleep-deprived detainee (Reda Kateb) is “Pavlov’s Dogs” by New Jersey hardcore band Rorschach—a song about conditioned behavior by a band named after the inventor of the famous psychological projective test. It’s an almost unnecessarily clever detail, but it reveals something of the remarkable degree of thought director Kathryn Bigelow and screenwriter Mark Boal bring to Zero Dark Thirty, itself an ideological ink-blot film that’s drawing cries (mostly eager and overstated) for its unblinking depictions of torture.

Granted, in its first hour, Zero Dark Thirty depicts the “uncooperative” U.S. captive in various states of duress: beaten, waterboarded (without the board), baited with food and drink, crammed into a footlocker-sized confinement box, stripped to the waist and walked around like a dog, and strung up by ropes tied to his arms to prevent sleep, shit-stained and slumped over. The scenes are disturbing, but by cinema’s post-Kinatay or The Passion of the Christ standards, Zero Dark Thirty’s graphic incitements are slight.

Zero Dark Thirty is nothing if not a forthright, above-board, cards-on-the-table kind of film—Redacted without the mitigating anger (or cheesy acting, thankfully). Without soapboxing or speechifying, Zero Dark Thirty effectively declassifies the extent of SOP Bush-era prisoner abuse and, while doing so, questions its procedural and moral efficacy. Characters make a point of saying that information extracted through torture is unreliable, yet it’s hard to imagine the more fruitful, lead-generating tips given “freely” by detainees during more agreeably conversational interrogations being offered up so easily without the threat of torture lurking somewhere in the near dark. The situations in the film are depicted as vexingly complex, and ditto its thorny moral matrix. And so, to amend Pope John Paul II’s notorious response to Mel Gibson’s passion-play provocations, “It is as it is.”

Perhaps Zero Dark Thirty’s program of behind-the-lines declassification is more successful when it works in the inverse. Bigelow opens with a plain title card reading, “September 11, 2001,” forgoing the well-circulated images of the game-changing attacks on America for layered audio clips, from the plane hijackings being phoned in to a doomed whispers of “I love you.” Likewise, a later depiction of the 2005 London bus bombing delays the boom until the vehicle has passed behind an obstructing shrub, again masterfully fiddling with audience expectations in a film which could easily suffer from the public’s general awareness with the events in question. Zero Dark Thirty even makes a point of never leaning on the zeitgeist-defining phraseology of “post-9/11,” preferring instead to refer to “pre-9/11.” Like fish in water, the film’s characters cannot recognize the mood of the moment while wading through it. Bigelow and Boal consistently eschew iconography and cliché, and never more so than in the figure of their willowy, demonstrably non-macho hero, Chastain’s “Maya.”

Introduced opposite Clarke’s bearded, burly C.I.A. spook, Chastain’s an almost too-ideal cipher for a liberal-minded acceptance of the kinds of things Zero Dark Thirty depicts. It’s easy to identify with Chastain because the actress capably wears the strain of her own emotional distress across her delicate porcelain visage, even as she absorbs her partner’s more unfeeling attitude and conditional command prompts (“If you lie to me, I hurt you,” and so on). Simply, it’s easier to watch her do these bad things because she convincingly looks like she knows she’s doing bad things, and looks like she feels bad doing them. That she barely qualifies as a character in any meaningful sense—codenamed, scooped into the C.I.A. out of high school, slumming around her unadorned Islamabad apartment, little more than a bundle of well-deployed tics—is, presumably, precisely the point. Her presupposed realness (“based on a true story,” and all that) provides its own rooted defense against questions of characterization. Maya exists to functionally guide the film through the realities it depicts, embodying at once the at-all-costs resolve of American foreign policy and the burdensome guilt that nips at its heels.

The at-times impenetrable chilliness that Chastain projects hangs over the film as well, and less productively in places. Especially compared to Bigelow’s career-redefining previous film, much of the tension in Zero Dark Thirty feels blunted. For its first hour-plus, the film serves up repeated scenes of spot-the-IED that seldom match The Hurt Locker’s edgy nail-biters. The use of title cards (“Human Error,” “Tradecraft”) to contextualize the film’s loose sequence of workaday vignettes, and advance the timeline as Maya zeroes in a high-profile courier whom she believes (with 100% certainty) is leading her to bin Laden, further defuses something of the film’s structural anxiety. And at times Zero Dark Thirty is so exhaustively dense in procedural jargon that it feels like Boal is reading snatches of John le Carré spy novels and swaths of the Sunday Times into his word processor.

Doubtless, Bigelow’s greatest strengths emerge when she can more freely flex her muscles as an action filmmaker. Returning to the emboldened meathead topography of The Hurt Locker, Bigelow’s at top form in the film’s last act, when a group of beefy special-ops bros set out on their late-night raid of a compound presumed (and proven) to be the hideaway of Osama bin Laden. Opening in a beautifully murky widescreen sequence of the troops’ top-secret choppers whirring across the craggy Pakistani countryside, then narrowing into jolting night-vision greens for the claustrophobic sweep through the complex, Zero Dark Thirty’s climactic break-in rushes with the heart-in-the-throat tension of The Hurt Locker.

There’s a certain exultant, “We got him!” quality to these last passages. But even the conquering, shoot-first soldiers are treated less as blindly patriotic military abstracts and more as largely likeable specialists, the kind of experienced, even-keeled pros that peopled Howard Hawkes or Tony Scott’s films. If Zero Dark Thirty seems at all keen to lay blame for the more specious tactics leading to bin Laden’s felling, that culpability lies more with the bickering C.I.A. brass and, excepting one archival appearance rebuffing America’s use of torture, the unrepresented figure of President Obama who authorized the history-making midnight run on a hunch—albeit, granted, one that wound up vindicated.

Zero Dark Thirty’s a stalemate film for deadlocked times. When Clarke’s bullying interrogator bellows at his captive, “This is what defeat looks like, bro,” there’s a palpable undertone of American self-reproach, at least on Bigelow/Boal’s part. If its spiked, tone-setting scenes of detainee abuse shock, it’s out of felt obligation, not line-towing glorification. For its faults as a piece of narrative cinema, Zero Dark Thirty seems more suitably positioned as a necessary cross-examination into the ideological and political-ethical confusion that’s compromised the post-9/11 American character. Whether such a cinematic grilling merits such enhanced interrogation techniques is muddiest of its many inkblots.