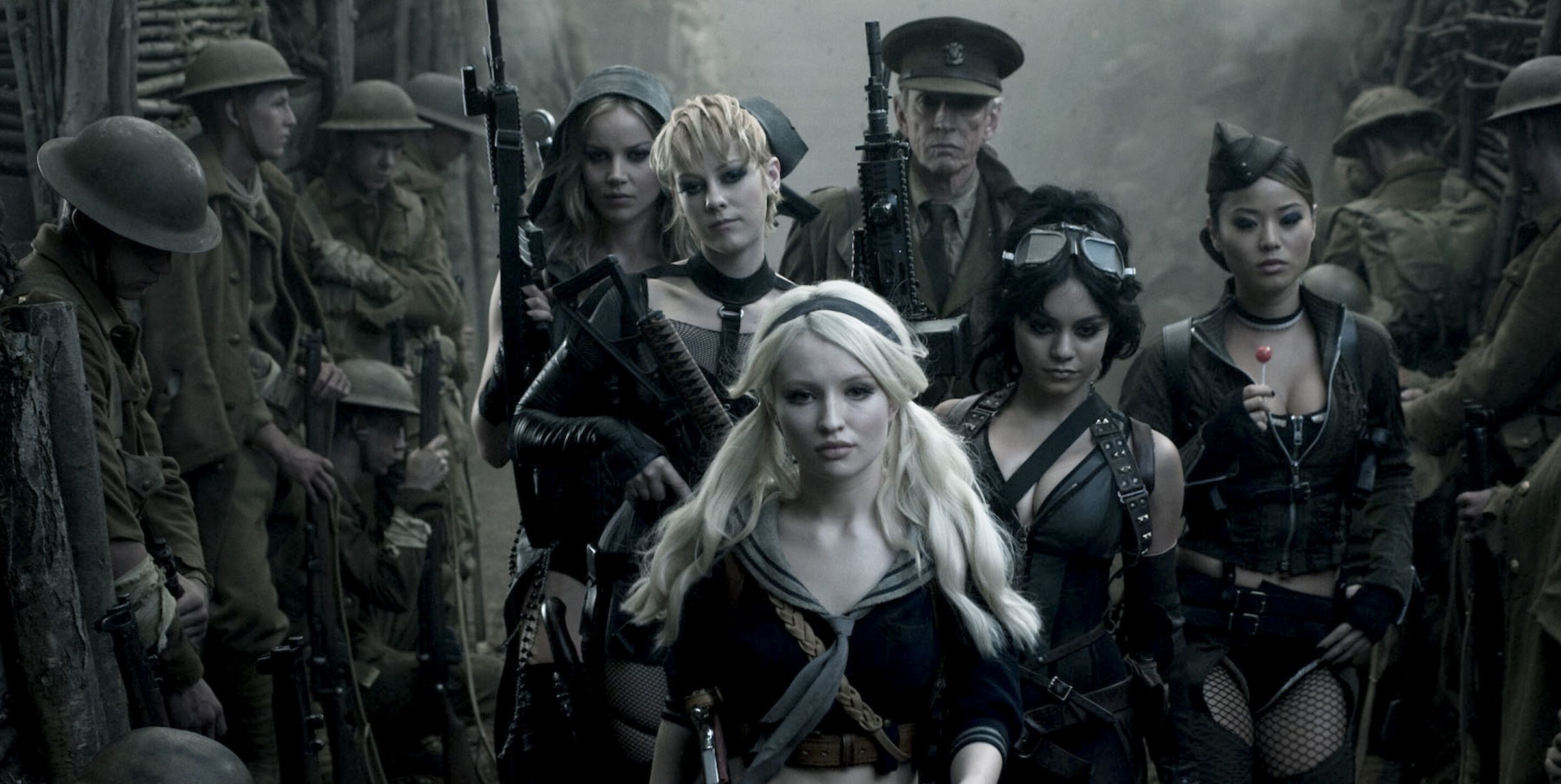 For his first original screenplay, Sucker Punch, director Zack Snyder offers a peek inside his head, which turns out to be a vomatorium of pop culture’s every geeky element. Barely legal hotties in stripper-schoolgirl outfits, colossal samurai statues wielding chain guns, Nazi zombies, Orcs, steampunk mech suits, assault rifles, WWII trench warfare, mobsters, rapists, and dragons are merely some of the myriad fanboy fetishes Snyder indulges throughout his latest, which claims too many superior ancestors to actually bother itemizing. The 300 and Watchmen auteur’s distinctive style remains the same, a mélange of super-slow-mo, computerized tableaus, and ultra-violence with more than a hint of psychosexual sadism. His Brazil-ish story, however, proves a brazen grab bag of pilfered material, and one that—in its stabs at Lynchian surrealism and meta-fictional cleverness—bites off considerably more than it can chew. It’s a random mishmash of juvenile ideas without a single lucid thread to hold them together, except for both the incessant CG bombast ripped off from video games and the works of Peter Jackson, the Wachowskis, and Quentin Tarantino, as well as the recurring lascivious gaze of Snyder’s camera on the china-smooth skin and full lips of bleached-blond heroine Baby Doll (Emily Browning).

Opening, like Watchmen, with a wordless musical montage prologue, albeit this time with an unpleasant fondness for overwrought dramatics conveyed via heavy-handed signifiers (fire, rain, liquor bottles, bare knees on the ground!), Sucker Punch follows Baby Doll as she’s committed to a grimy mental institution by her stepfather (Gerard Plunkett). The old man has locked her away because she tried to prevent him from raping her younger sister (hey, he was mad about getting cut out of his dead wife’s will!), and accidentally killed the young girl instead. Once inside the facility, skeezy supervisor Blue (Oscar Isaac) shows her a common area with a stage known as the Theater, which—when coupled with the intro sight of a curtain being pulled back to reveal the action proper—is Snyder’s clumsy way of conveying how the locale of Baby Doll’s adventure is really the theater of the mind. And as every other character seems to blurt out in one form or another, the mind affords people the power to shape their own destiny, and the world. It’s a notion that also applies to a director and his films, though Snyder’s self-reflexive instincts are blunt and lifeless, and his subsequent trip down the fantasies-within-fantasies rabbit hole, replete with a fem-rock cover of “White Rabbit” to boot, primarily speaks to his confusion over notions of actualization and empowerment.

At the moment Baby Doll is to be ice-pick lobotomized (by Mad Men philanderer Jon Hamm, no less), Sucker Punch pulls a switcheroo: Baby Doll is suddenly being dropped off by a priest (also Plunkett) at a 1960s nightclub run by a Rat Pack-y Blue, where dancer Sweet Pea (Abbie Cornish) is critiquing the exploitative nature of Baby Doll’s mental-ward plight, which was the play being rehearsed. Such narrative curlicuing is meant to engender questions of what is and isn’t real, but as Baby Doll plans her escape from this malevolent house of burlesque and prostitution, Snyder’s attempts at generating confusion flop miserably. Nonetheless, he barrels forward with the impatience of a man intent on getting to the babes-fight-monsters mayhem, introducing Baby Doll to a group of girls with similarly sexualized names and skanky attire—Rocket (Jena Malone), Blondie (Vanessa Hudgens), and Amber (Jamie Chung)—and then having her regularly retreat into virtual worlds of guns-and-swords violence that marry components of (among others) Kill Bill, The Lord of the Rings, the PS3’s Killzone, and sci-fi animé. In these apocalyptic landscapes of gigantic zeppelins, castles, and phallic blades and firearms, everyone’s a cartoon badass, Scott Glenn is the David Carradine-stand-in sensei, and no one can truly get hurt—until, that is, Snyder warps his rules in a vain shot at eliciting genuine emotional engagement.

All bloodless, weightless, inconsequential sound and fury, these dynamically composed but masturbatory centerpieces are cast as the reveries Baby Doll experiences while she performs dance numbers that mesmerize Blue and his gentlemen clientele. As a tale about tough chicks revolting against uniformly misogynistic guys, Sucker Punch posits these hypnotic routines, which we never see, as examples of female sexuality’s defiant power. Yet Snyder’s conception of his heroines—who are asked to do little more than pout, strut, glare, and look fierce—is pure nonsense, since like the story’s villains, his film reduces them to mere objects of carnal desire, and ones whose physical prowess and take-no-shit attitudes is less a face-slapping rejoinder to sexism than a manifestation of amalgamated male desires. A zoom into Baby Doll’s mini-skirt hemline as she wraps her hand around a sword’s handle epitomizes Snyder’s true aim here, teen-boy titillation, and any ensuing message about feminist liberation—and any expository efforts to own up to said titillation—is just so much disingenuous lip service aimed at masking the proceedings’ wet-dream pandering. When Glenn’s sage counsels, “If you don’t stand for something, you’ll fall for anything,” it plays like an unintended warning to moviegoers worldwide: demand better, or suffer more monotonous, pretentious digitized dreck like this.