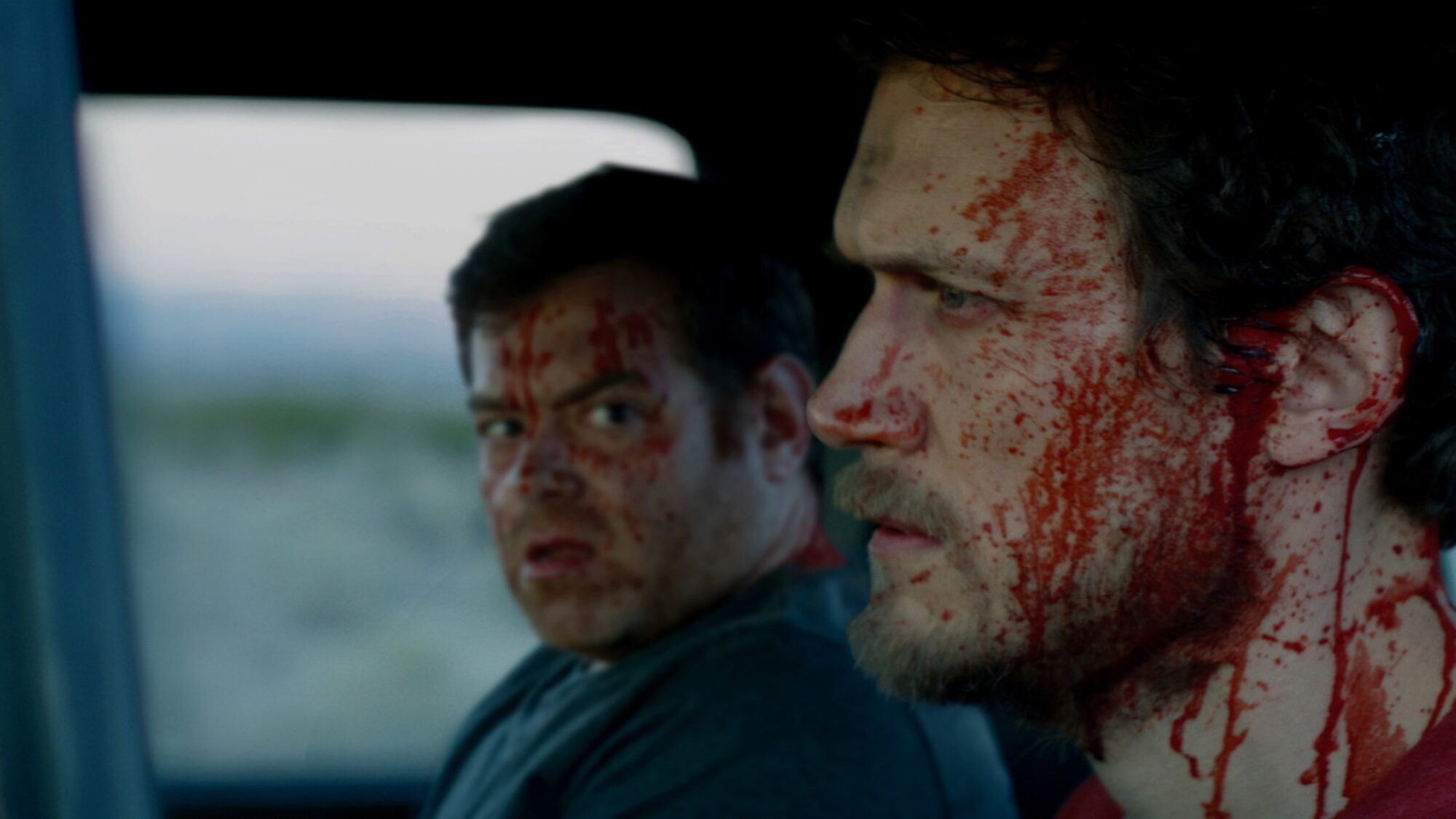 In Southbound, the filmmakers forge a clever path around the most prominent pitfall of the anthology film—the tedious stop-and-start seguing from one short to another—by allowing characters to pass figurative batons to the next protagonist mid-narrative. The film often derives suspense, or, more accurately, a sense of emotionally detached amusement, by encouraging us to guess when one story is going to abruptly merge into another, cumulatively forming a temporal loop in which there are no true beginnings or endings. Even the role of the anthology-film M.C. has been updated: Occasionally, Larry Fessenden can be overheard as a creepy/hip D.J. of the damned, an overseer who inadvertently speaks over each hero’s abrupt exit.

The four shorts contained here, directed by Roxanne Benjamin, David Bruckner, Radio Silence, and Patrick Horvath, respectively, are surprisingly consistent in quality. They all pivot on the conceit of the American West as a mythical hellscape informed by the pop culture of the 1950s and the ‘70s. Cafés and motels reflect the former decade, while the bars, trucks, dusty tableaus, and studiously sexy, vaguely countercultural clothing embody the latter. In other words, the ‘50s predictably represent the open, proper “day” to the 1970s’ dangerous, id-governed “night.” These worlds are tied together by a road dotted with a highway sign that’s pointedly whited out, as these characters are traveling a path that goes both everywhere and nowhere.

So, yes, Southbound is yet another contemporary horror film that belongs to seemingly every era but its own, taking stock solace in the comforts of fetishizing the past, rather than wrestling with the uncomfortably alive issues of the present. If there’s one urge rising horror directors need to surmount, it’s the yearning to remake Steven Spielberg’s Duel, Tobe Hooper’s The Texas Chainsaw Massacre, and John Carpenter’s Halloween over and over again, ad infinitum. (Talk about a temporal loop.) Though somewhat more contemporary clichés are mined too, most annoyingly the scenario in which a family is besieged by psychos wearing ironically innocuous masks, while even more pronouncedly ironically cheesy music plays in the background.

But there are also tense, inventively breakneck moments to be found in Southbound. Bruckner’s contribution, “The Accident,” perversely weds two nightmares together: of suddenly hitting someone out in the middle of nowhere, with your and their lives on your hands, and of being tasked with performing gory, impromptu medical operations in the grips of an emergency. The sleazy, desolate hospital imagery is derivative of Rob Zombie’s Halloween II, but Bruckner’s command of pace transcends such limitations, and Gerald Downey’s engagingly sane performance as the patsy provides the film with a greatly needed dosage of conventional humanity.

And Horvath’s “Jailbreak” evocatively hints at the mythos that governs Southbound’s desert setting, a netherworld wandered by lost souls that only appears to be, say, Texas, Arizona, or New Mexico. The highpoint of this short is a bar scene that suggests the atmosphere of Oliver Stone’s U-Turn by way of the Red Room from Twin Peaks, likening demons to truckers who are as road-weary and in need of a beer and a shot as the rest of us. Southbound is more a feat of ingenuity than originality, but certain passages have a pulpy, nihilistic je ne sais quoi.