The 45th edition of International Film Festival Rotterdam (IFFR) will be the first in nine years without current artistic director Rutger Wolfson at the helm. Much has been said of Wolfson’s tenure as the head of one of the world’s biggest public film festivals, and not much of it—recently at least—has been positive. Having missed 2014’s festival period due to illness, he announced in December last year that the 44th edition would be his last.

The problems with IFFR are many, and to suggest that Wolfson is solely to blame for a declining reputation as a hotbed for high-quality leftfield cinema is merely mean-spirited. Still, it’s an open secret these days, among press delegates at least, that IFFR has become something of a bloated balloon in the last decade—one whose expanding size each year means that its large team of programmers has to operate increasingly on an “any old film will do” policy. For now, one hopes that Wolfson’s successor has the strength in character to realize that size matters, and that when quality control is no guarantee, smaller can indeed be better.

In fairness, most of the guffaws, walkouts, and eye-rolls in Rotterdam are to do with the Tiger Competition, which this year hosted 13 first or second features—11 of which were world premieres. Opting for a juried competition of this kind inevitably places a burden on the selected films: These are the works upon which the trades will place journalistic priority and so, in turn, they come to represent the festival as a whole—not only as an indication of its overall quality, but of the discerning eyes and political tastes of its programming team too. Venturing into the Tigers rarely ends well. Often characterized by a put-on radicalism, they range from the politically toothless to the off-puttingly pretentious. Unnamed, somnambulant archetypes that don’t talk much are very much the “in” thing.

The Project of the Century is a case in point. Cuban director Carlos M. Quintela’s second feature, following 2013’s The Swimming Pool, has much going for it on paper. Set in the Electro-Nuclear City, a now-abandoned power plant in Juragua begun in the 1980s as part of a wider nuclear energy project by Cuba and the USSR, the film entails three generations of males living out a listless existence in what’s now a semi-derelict workers’ accommodation. Scenes of their pained interactions, shot in black and white (“appropriate” reads the catalogue text, though why it’s appropriate isn’t clear), are interspersed with propagandistic television dispatches from when the neighboring nuclear reactor was under construction.

It’s a shame that such a fascinating site—which doubles today for a nation in political limbo—is utilized for such an inert drama. But The Project of the Century has a postmodern edginess to it, and falls foul of a common misassumption that’s prevalent in much of today’s international art-house scene: that cinematic depictions of ennui must themselves induce it. Truth be told, there’s a much better investigation into this failed Russo-Cuban venture to be made, and whether that takes the form of a documentary, an essay film, or a fictional work—whose central relationships aren’t based on facile symbolic representations, but on relatable characters—isn’t for this critic to say. But for films with protagonists who literally masturbate into a toilet while their grandfather interrupts their father performing oral sex on his new girlfriend, the Tiger Competition was, at IFFR 2015, the place to be.

Moving away from this cumbersome program, however, yielded tastier fruit. Within the IFFR+ strand was, for the third consecutive year, the appropriately named Scopitone sub-strand, which plays host to recent music documentaries. One of them, Conquering China, is as intriguing as it is sometimes uneasy in its ambiguous mix of naïve sincerity and po-faced narcissism, as Swedish singer Johan Jonason travels to Shanghai hopeful of a career in disco-pop. Jonason’s clear frustration in encountering bemused DJs and producers is humorous in itself, but it’s difficult to say whether he’s acting out of a genuine sense of entitlement or a real curiosity as to why “Western music” doesn’t travel well in the Far East.

John Pirozzi’s Don’t Think I’ve Forgotten offers a corrective to this latter notion. This insightful documentary provides a compelling overview of Cambodia’s popular music scene in the two decades from gaining independence, after a century under French rule in 1953, to the rise of the Khmer Rouge and the atrocities that unfolded thereafter. As conveyed succinctly and clearly by Pirozzi’s film, it was Cambodia’s newfound sovereignty that conditioned a massive influx of Western traditions in the 1950s and 1960s, and chief among were the likes of the Rolling Stones, the Beatles, and Santana, whose styles were profitably repurposed by the Drakkar Band, Yol Aularong, and a whole bunch of other talented musicians.

At the same time, however, Cambodia’s geographical position (it neighbors Vietnam, which was about to withstand its own imperialist invasion), as well as the contradictions stemming from having a government propagating international neutrality on one hand while murdering left-wing activists at home on the other, made it vulnerable to other influencing forces. Don’t Think I’ve Forgotten is a quietly gripping account of the dialectical nature by which countries like Cambodia are held in the grip of the Western nations’ aggressive foreign policies: The same processes by which the country was granted independence were also those by which it was left open to an attack and genocide by Pol Pot.

Chiming with Don’t Think I’ve Forgotten’s focus was Jade Miners, the new film by Burmese-Chinese director Midi Z, in which young men are observed digging illegally for much coveted and highly valued jadestones in Kachin State, the mountainous region in northern Burma. While Don’t Think I’ve Forgotten ends on an optimistic note, showing images of present-day Cambodia on the road to recovery, the subjects of Jade Miners have been left jobless and impoverished by Burma’s ongoing civil war, which dates as far back as 1948. The film itself gives very little of this context, however, instead focusing on the men at (and in between) work: digging, drilling, eating, sleeping, phoning home, and digging again—all in search of the one piece of jade that might change their lives forever.

Labor is also at the forefront in White Coal, the new documentary by Austrian experimental filmmaker Georg Tiller. An essay film on two forms of industry (socialism and capitalism) the film triumphs over its own lethargies with some wonderful 16mm footage of Taiwan’s Taichung Power Plant, the largest coal-fuelled power station in the world. In between these segments are black-and-white sequences, set aboard a river barge transporting coal through Poland, which exude half-fictionalized pretensions that the film would do better without, most notably the obliquely sketched laborer who appears to have been lifted straight out of another age.

The Taiwan sections, so reminiscent of the work of James Benning and the Harvard Sensory Ethnography Lab, linger longer. There’s something innately absorbing about the pictorial contradiction between the vibrant colors on display at industrial sites like this and the sheer monotony of the work involved there. For all the routine labor carried out at the power plant, though, it’s those shots in which painters have to painstakingly cover all computers, buttons, and monitors with brown tape before commencing their own work that seem most absurd.

Representations of labor have a built-in tendency to romanticize it. That’s an argument compellingly put forth in Iseeyou, a 2013 short by Simon Gush that concentrates on various artistic and sculptural renditions of manual work in present-day Johannesburg. Taking its name from ICU, South Africa’s first multiracial trade union, Gush’s 14-minute film was a treat to behold at this year’s IFFR, mixing the personal and the historical to reaffirm the strength of essay films at their best. It was in good company, too, coming fourth in a five-film program titled Monuments and Follies, which kicked off and concluded with what were probably the two best films in the festival.

The first of these is Embargo, which confirms for anyone who didn’t already know that Austrian filmmaker Johan Lurf is a master of the experimental short. Opening with a strobe-effect title card and unfolding throughout to a relentlessly dizzying score by Jung an Tagen, this 10-minute gem is an aggressive foray through what looks like an empty business park at night. Lurf’s camera is as slick as it is removed: Constantly moving in circles on the one hand, it’s forever distanced from the place it’s observing on the other—and the closer we get, the further away we seem. As becomes increasingly clear, this isn’t the kind of place we first thought it was. It’s quite bedazzling.

Final word, though, to the film that concluded Monuments and Follies—and the one that perhaps befitted the program’s title best. This was Yuri Ancarani’s San Siro, which received its world premiere in Locarno last year. Taking its name from the formidable 80,000-seat stadium shared by Italian top-flight soccer rivals AC Milan and Inter Milan, Ancarani’s film is a brooding and comprehensive panorama of the preparatory rituals of a typical match day. Under ceaseless rain, we watch the groundwork unfold in wonderfully geometric ways, from the stewards who set up barriers and cordons, to the security personnel who patrol the upper perimeters of the stands, to the guy tasked with readying the pitch (getting rid of pigeons, touching up the penalty spot with a brush of paint), to the audiences who flock in their thousands, to, finally, the players themselves, who alight the team coach like warriors entering a battle with silent, winning confidence. 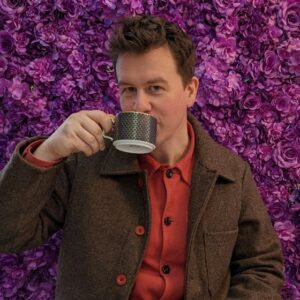 Michael Pattison is a writer, film critic, tutor, programmer, and filmmaker from Gateshead. He is currently Creative Director of Alchemy Film & Arts in Hawick, Scotland.

Review: Above and Beyond