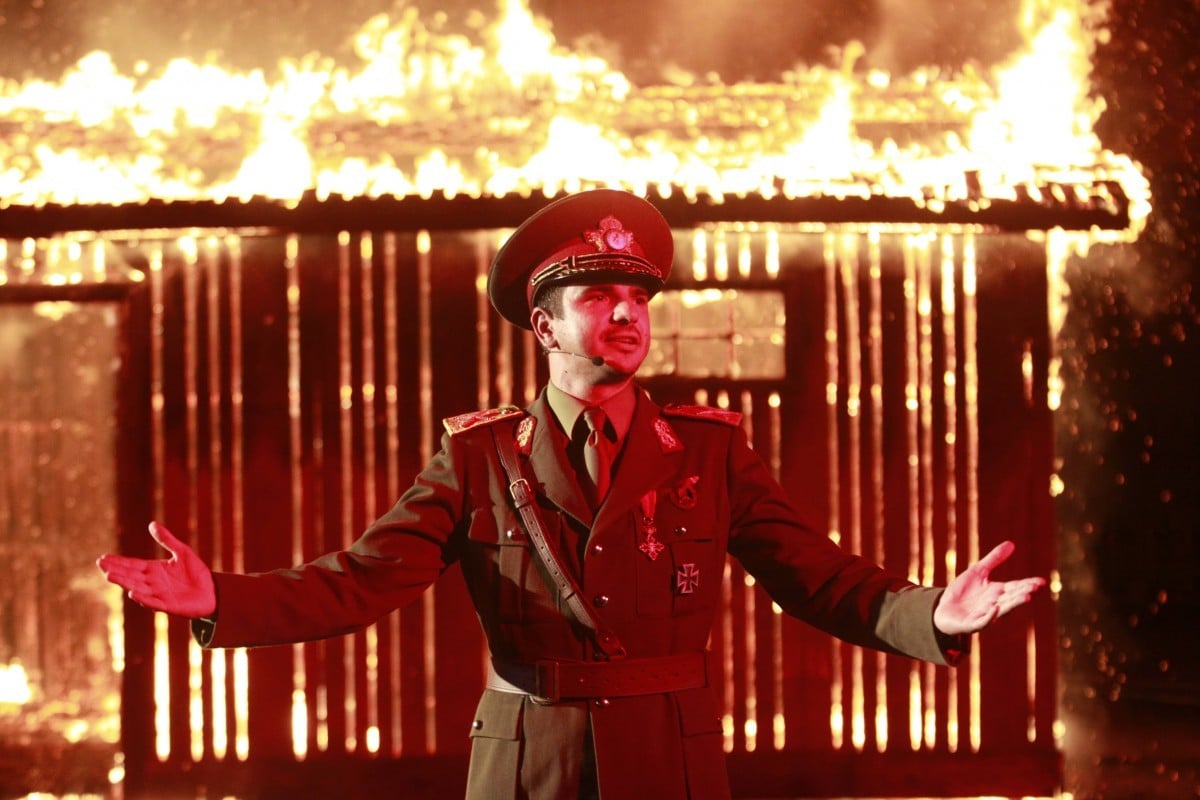 Prime minister of Romania during most of World War II, Ion Antonescu is one of the era’s supreme villains: a virulent anti-Semite, Nazi collaborator, and authoritarian dictator whose troops murdered Jews with such velocity and enthusiasm that even Hitler was shocked by their actions. Upon ordering the forced expulsion—and, if necessary, genocide—of the Jews of Bessarabia and Bukovina, Antonescu proclaimed, “I do not care if we go down in history as Barbarians.” Radu Jude borrows that declaration, so haunting in its cruelty and disarming in its blitheness, for the title of his latest film, a bitterly comic essay on nationalist mythologies and historical amnesia that locates the seeds of Romania’s currently resurgent ethno-nationalism in the nation’s collective failure to truly confront its own past.

For while Antonescu was convicted of war crimes and sentenced to death by firing squad shortly after the war, there have been repeated attempts to rehabilitate his image in Romania since the fall of Nicolae Ceaușescu. Take Sergiu Nicolaescu’s 1994 film The Mirror, a hagiographic treatment of Antonescu’s rule that portrays the leader as a defiant protector of his people. Jude inserts a substantial clip of that film into I Do Not Care If We Go Down in History as Barbarians, having it play on a small TV set positioned in the exact center of the frame as we hear the off-screen voice of Jude’s protagonist, Mariana (Ioana Iacob), providing sardonic, outraged commentary on the film’s distorted presentation of Antonescu as a misunderstood hero. There’s an element of desperation in the scene: While Mariana offers an incontestable rebuttal, no one but her boyfriend (Alex Bogdan) is there to hear it. Meanwhile, The Mirror’s comforting nationalist lies are being beamed into homes all across Romania.

A headstrong theater director attempting to stage a public reenactment of the Odessa Massacre of 1941, in which Romanian troops slaughtered thousands of Ukrainian Jews, Mariana is obsessed with bringing the full weight of historical reality to her fellow countrymen. She obsessively reads histories of the period and drops quotations from philosophers and historical figures into everyday conversation. The film is consumed by lengthy, probing conversations—mostly shot by a statically mounted 16mm camera that pans back and forth to cover the actors’ movements—in which Mariana discusses art, philosophy, history, and politics with her various collaborators and friends.

Her most persistent interlocutor is Movilă (Alexandru Dabija), a local official tasked with overseeing the publicly funded production, who constantly pleads with Mariana to tone down her work’s unvarnished depiction of anti-Semitic violence. Movilă is a relativist, content in the knowledge that all memory is willfully selective, while Mariana truly believes in the power of stark historical truth. Though at times didactic and overloaded with quotations from the likes of Wittgenstein and Arendt, Jude’s dialogue nevertheless manages to feel remarkably naturalistic. That’s thanks in no small part to the powerfully unaffected performances of a cast that finds the subtle humor and neurotic character details embedded in Jude’s dense screenplay. Iacob captures Mariana’s unrelenting passion while also finding moments of vulnerability and self-doubt in the role, including moments of hesitation and anxiety borne of the fact that she’s a petite, cosmopolitan woman attempting to exert control over a large cast of rugged men, many of whom are diametrically opposed to the vision of her project.

Jude’s heavy themes are leavened by a self-effacing sense of modesty. Jude isn’t attempting to make grand pronouncements about the nature of memory and truth. Rather, I Do Not Care If We Go Down in History as Barbarians finds the director constantly interrogating his own perspective, questioning Mariana’s relationship to the wider public. That theme comes to a head in the film’s climactic presentation of the artist’s reenactment. Here, Jude switches from the warm dreaminess of 16mm to the harsh hyper-realism of digital video. The scene has the feel of a simple documentation of a live public event, but it isn’t clear that it’s actually any more “real” than the rest of the film. In particular, whether and to what extent the crowd of onlookers’ reactions are coached remains one of the film’s most intriguing enigmas.

Ultimately, Mariana finds herself perplexed and deflated by the public’s response to her work. One senses this reaction may be autobiographical for Jude, whose film Aferim! attempted to challenge Romanian audiences about the nation’s historical treatment of Roma people. As one of the few directors of the so-called Romanian New Wave whose work explores the country’s unsavory pre-Soviet past, Jude is swimming against the popular tide of revisionism and historical moral blindness. The anti-Semitic violence and hatred laid out in his latest is truly chilling, as is the contemporary tendency to diminish and obscure that dark past. But perhaps most disturbing of all is the idea put forth in the film’s conclusion: that one could present the truth to the public in all its brutality and horror, and it wouldn’t make a bit of difference.

Interview: Lynn Shelton on Honing Her Process for Sword of Trust