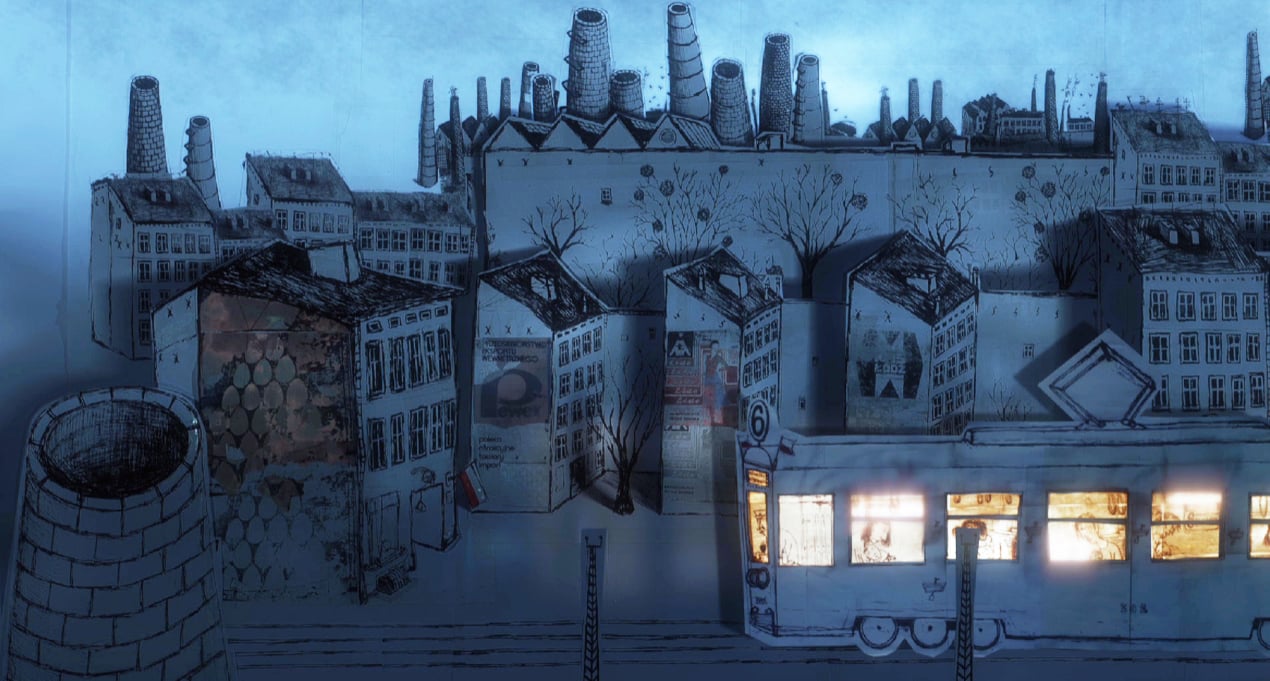 Composed of sketches in motion, against backdrops of lined paper with the wrinkles, smudges, and tape left visible, Polish artist and performer Mariusz Wilczyński’s Kill It and Leave This Town militates against the extinction of traditional animation techniques. Not for a moment is the viewer allowed to forget that these are drawings, sequenced to create the illusion of movement. If the magic of animation is resurrected in Wilczyński’s hands, it’s a dark magic, as familiar with the grotesque as it is the lyrical.

Kill It and Leave This Town explores the industrial city in Poland where Wilczyński grew up. Among factories humming with machinery, along dreary streets lined with beer cans where the only splashes of color are the red stripe of the Polish flag or the ribbon in an old lady’s hair, Wilczyński’s mother and father stumble through their lives. Wilczyński himself makes cameos from time to time, drawn as a naked giant, at once infantile and overgrown. In one scene, the father attempts to show the family a fairy tale titled “How Fiki Miki Mouse Sailed Across the Seas and Oceans from America” on a slide projector, raving and cursing when the device gets stuck between slides. In another, the mother babbles on her deathbed to a son too busy drawing to pay her any attention. The film borrows its form from poetry as opposed to traditional narrative cinema, resulting in a loose assemblage of vignettes that loop back on one another, recreating the associative activity of memory and imagination.

The film’s animation style strikes an unlikely balance between the childlike and the proficient. Dense spirals pouring out of smokestacks, a recurring motif, resemble smoke only insofar as they cite the scribbles that stand in for it in children’s drawings, whereas the sequence of a mortician’s hands sewing up the body of Wilczyński’s mother exhibits the cold precision of a draftsman. One scene on a trolley is rendered entirely by hand except for the windows, replaced with live-action film of rain droplets streaming down glass. Such atmospheric composites recall Don Hertzfelt’s Everything Will Be Okay, as well as Soyuzmultfilm classics like Yuri Norstein’s Hedgehog in the Fog. Tadeusz Nalepa’s score, with all the charm of someone improvising songs on a guitar, echoes the animation’s off-the-cuff quality.

Wilczyński exploits his medium to bind the mundane with the dreamlike, continuing a long tradition of Eastern European surrealism. In a scene at a fishmonger, the fish floating in a barrel of water become people ready to be gutted and beheaded. Later, Wilczyński’s mother stumbles off the trolley into an ominous figure, sheathed in a trench coat, hat, and gloves, who gives her change for the fare. When she asks, “Who the devil are you,” his head swivels around to reveal a talking cat, like Behemoth from Buglakov’s Master and Margarita, who claims to be “part of that power which wills forever evil, yet does forever good.”

Only in hand-drawn animation can such fairy-tale grotesqueries convince, in part because it never aims for photorealism; Wilczyński leaves in the free-hand scribbles and the stutter between frames for our imagination to iron out. Even in a city only accessible to memory, a world of the past constrained by poverty and despair, anything is possible for Wilczyński, as it must have seemed in childhood—and yet no possibility scrubs clean of the stain of death.

Review: Netflix’s The Prom Is the Dream Date It Wasn’t on Broadway

Review: 76 Days Is a Harrowing Document of the Covid Outbreak in Wuhan