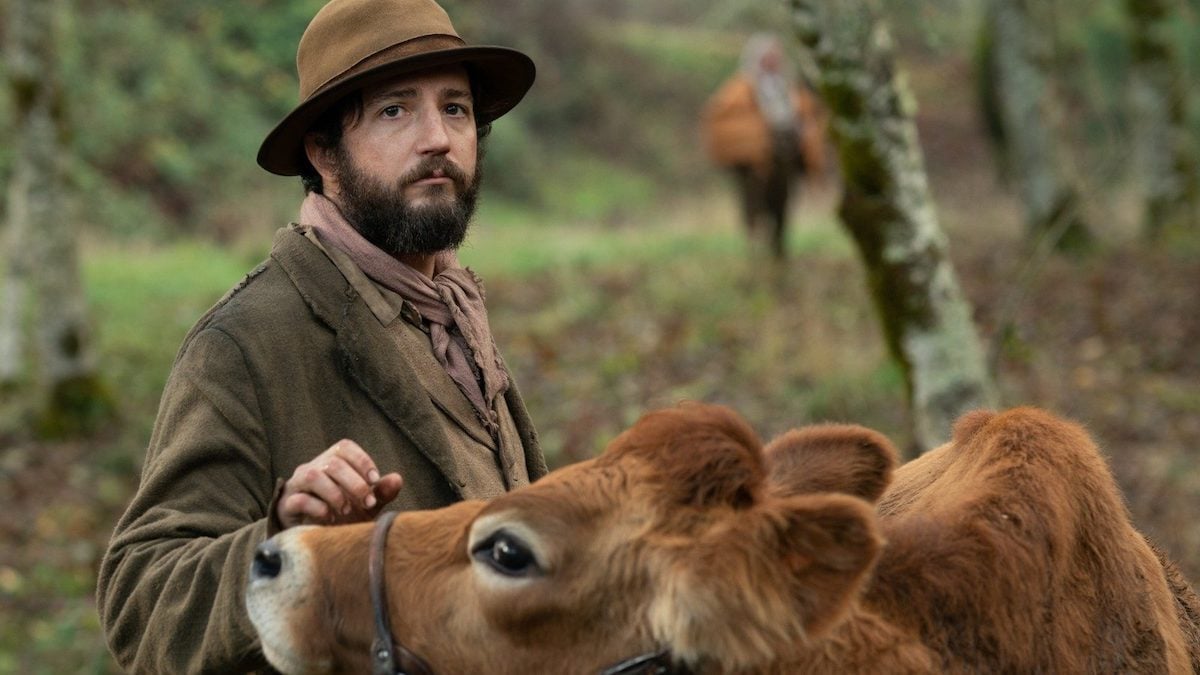 The best Kelly Reichardt films strike a sublime balance between character study and socioeconomic critique. First Cow—a mostly 19th-century-set drama co-written by Reichardt and frequent collaborator Jonathan Raymond, and based in part on his 2004 debut novel The Half-Life—is one of the director’s shakier efforts. The film begins with an especially incisive William Blake quote (“The bird a nest, the spider a web, man friendship”), and its themes of systemic exploitation, the enduring vagaries of the free market, and the alternately tender and tempestuous bonds of male camaraderie are propped up by characters who come off as half-formed avatars rather than flesh-and-blood human beings.

That isn’t to say Reichardt, who’s edited all of her films since Old Joy, has lost the ability to create multilayered, gently provocative imagery. First Cow’s opening scene, set in the present day, is particularly beautiful, visually and thematically. A young woman (Alia Shawkat) walking her dog uncovers a pair of skeletons beside an Oregon river. Cinematographer Christopher Blauvelt frames the bones in a steady, un-showy composition (the film is photographed in the boxy 4:3 aspect ratio) so that it takes a few seconds to realize what you’re looking at. The slow-dawning revelation of the moment epitomizes Reichardt’s tendency in First Cow, as well as in many of her other films, to let drama emerge steadily and organically.

How did these bones get here? Reichardt is content to leisurely amble toward the answer to this question, and that approach does intrigue in the early going. In the Pacific Northwest wilderness of the 1820s, a cook named Otis “Cookie” Figowitz (John Magaro) accompanies an aggressive group of trappers as they head toward an Oregon Territory outpost. One night he discovers a Chinese immigrant, King-Lu (Orion Lee), hiding naked in the nearby brush. King-Lu is apparently on the run from some Russian ruffians, so Cookie hides him among the trappers’ belongings. The pair reconnect again at the outpost, where they become drinking buddies and, eventually, partners in fortune-seeking crime.

The outpost’s wealthiest resident, a haughty Englishman referred to only as Chief Factor (Toby Jones), has just brought in the first cow to grace the territory. Figowitz and King-Lu decide to steal the cow’s milk—under cover of night, and as often as needed—which they then use as the key ingredient in artisanal pastries that become a lucrative staple of the outpost’s thoroughfare. Their unwitting benefactor finds out about the treats (though not, at first, about their underhanded procuring methods) and offers them a handsome sum to bake pastries for him personally. And so the cycle of exploitation, righteous and not, continues—until it can’t.

None of that summary quite captures First Cow’s gravelly ambience. The outpost itself is as vividly realized and lived-in a location as the mining town in Robert Altman’s McCabe & Mrs. Miller, a film Reichardt nods to here via both Anthony Gasparro’s mud-strewn production design and the presence of Rene Auberjonois as a scarecrow-thin eccentric with a crow always on his shoulder. The sense of a nascent community rising up out of the primordial muck is palpable, so it’s unfortunate that Figowitz and King-Lu ultimately feel outside it all.

This isn’t the fault of Magaro or Lee. Both performers have a pleasing and often very funny rapport, especially whenever they exchange conspiratorial glances over a shared bottle of whiskey. However, Reichardt sees Figowitz and King-Lu, first and foremost, as the bag of bones they will become (abusers and victims both of capitalist injustice), rather than the men they are in each given moment. Their all-too-apparent endpoint supersedes their tragically flawed existence, which has the adverse effect of diminishing their humanity, reducing them to paper-thin symbols. This wreaks havoc with a finale that grasps for a profound elementalism akin to one of Apichatpong Weerasethakul’s lushly ardent fantasias, but instead comes off with the contrived ambiguity and labored didacticism of lesser John Sayles.

There’s more insight into economic, racial, and social inequities in the offhand, unsubtitled exchange that Reichardt captures between two Native American women (one played by Lily Gladstone, the breakout star of Certain Women) as they converse among themselves in Chief Factor’s home. It’s the supporting cast and the side details that really sing in First Cow, both giving a sense of the alternately hopeful and despairing qualities of the American experiment that Reichardt aims, and too often strains, to illuminate.

Review: In Saturday Fiction, History Itself Is the Realization of Performance