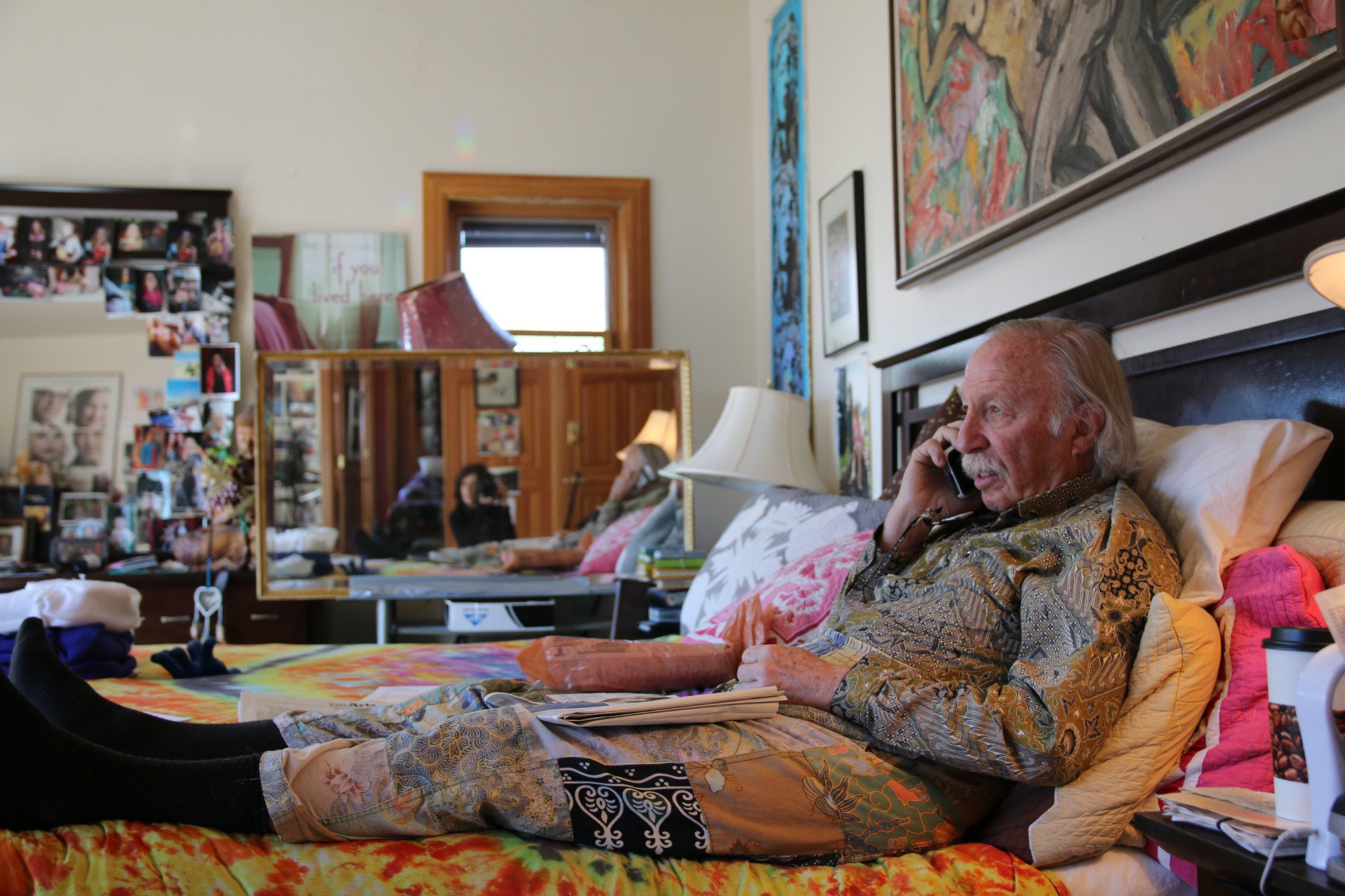 Though the title of Lynne Sachs’s Film About a Father Who is inspired by Yvonne Rainer’s 1974 avant-garde feature Film About a Woman Who, a deconstruction of the “ideal” domestic unit, this long-gestating documentary takes a more personal and certainly less abstract look at a less-than-stable family life. Composed largely of conversations with her family that Sachs has captured over the last few decades, the film often feels like the coherent story everyone wishes they could assemble out of the neglected boxes of old home video tapes in the garage. But Sachs goes places that most amateur moviemakers avoid, undercutting the image of the past as simpler or more stable than the present.

Sachs’s father is outwardly easygoing, a self-styled “hippie businessman.” In most of the time periods covered in the documentary, Ira Sachs Sr. sports a handlebar mustache and a stringy mop of unkempt hair. Film About a Father opens with an early-‘90s conversation with him that comes off like some kind of early promotion for cellphones: While the wealthy real estate developer talks about how much he enjoys the mobility that cellular technology allows in his business dealings, we see him skiing and relaxing, hanging around in his trademark Hawaiian shirts. Methodically but not without affection, the film undermines this projected image of the ambitious yet insistently casual, essentially harmless man.

At first, it’s easy enough to believe that Ira, whom Sachs describes at the outset of the documentary as a loving father, has committed crimes with few victims other than a resentful lover or two and his morally scandalized mother, Rose, known as Maw-maw, who appears occasionally in older footage to gripe about her son’s behavior, which she colorfully describes as a kind of sexual handicap. But it becomes clear that not all of the women who Ira has been with were equal players in his lifelong game of libertinism. As a decades-old tearful conversation with his second wife, Bali native Diana, makes evident, the man leveraged his largesse to maintain a privileged position in all of his relationships, one that kept him shielded from dealing with the emotional distress that his actions were spreading.

For her part, Sachs approaches the looming but seemingly unassuming figure of her father with a frankness that, if not quite unsparing, couldn’t have been easy for her. She structures Film About a Father as an ongoing investigation of his character, with the existence of two offspring he kept hidden from his other children coming as a late-film reveal. Sachs’s interrogation of her emotionally reticent father repeatedly brings her back to fuzzy home videos captured in her childhood or young adulthood, seeking in them some explanation for his behavior, or at least signs of the stories she wouldn’t be able to assemble until later. “How can you look for something you don’t even know is lost?” she ponders over early-‘90s footage of her younger half-brothers playing in the woods, referring to two additional secret half-sisters who were growing up at the same time, unbeknownst to the other Sachs children.

Given the nature of its construction, Film About a Father can feel insular to a fault, but Sachs nonetheless finds her most affecting imagery in her old snippets of home video, with its indistinct lines, color distortions, and instances of “snow.” Part of this comes from the metaphorical redeployment of her footage—like the glimpses we get of the small mountain located on a property that Ira was developing in the ‘90s. Early in the film, the large, grassy mound symbolizes the serenity and ease of his personal and professional life, but footage later depicts the dynamiting of that mountain, just as the Sachs family’s sense of their past is upended. There’s also something specific about analog home video that Sachs exploits here. It’s much hazier and harder to interpret than the crisper present-day digital footage, or the warm 16mm she used to interview her Maw-maw before the latter passed; it speaks much more to the instability of memory, the faultiness of the images we keep with us from the past.

Only implicitly connecting the Sachs family’s problems to the distribution of privileges and indignities under patriarchy, the film lays emphasis on the personal side of “the personal is political.” Beyond attempting to come to terms with Ira the philanderer and the ways his laissez-faire approach to relationships with women has shaped her life and those of her siblings, Film About a Father Who also explores the relationship between recording and remembering, the way past and present inform each other as the stored memories of film and video footage are brought together into a coherent shape. It’s an evocative distillation of some truth from the sprawling mess of documents that a family always leaves in its wake.

Review: Some Kind of Heaven Keeps Its Subjects at a Frustrating Distance