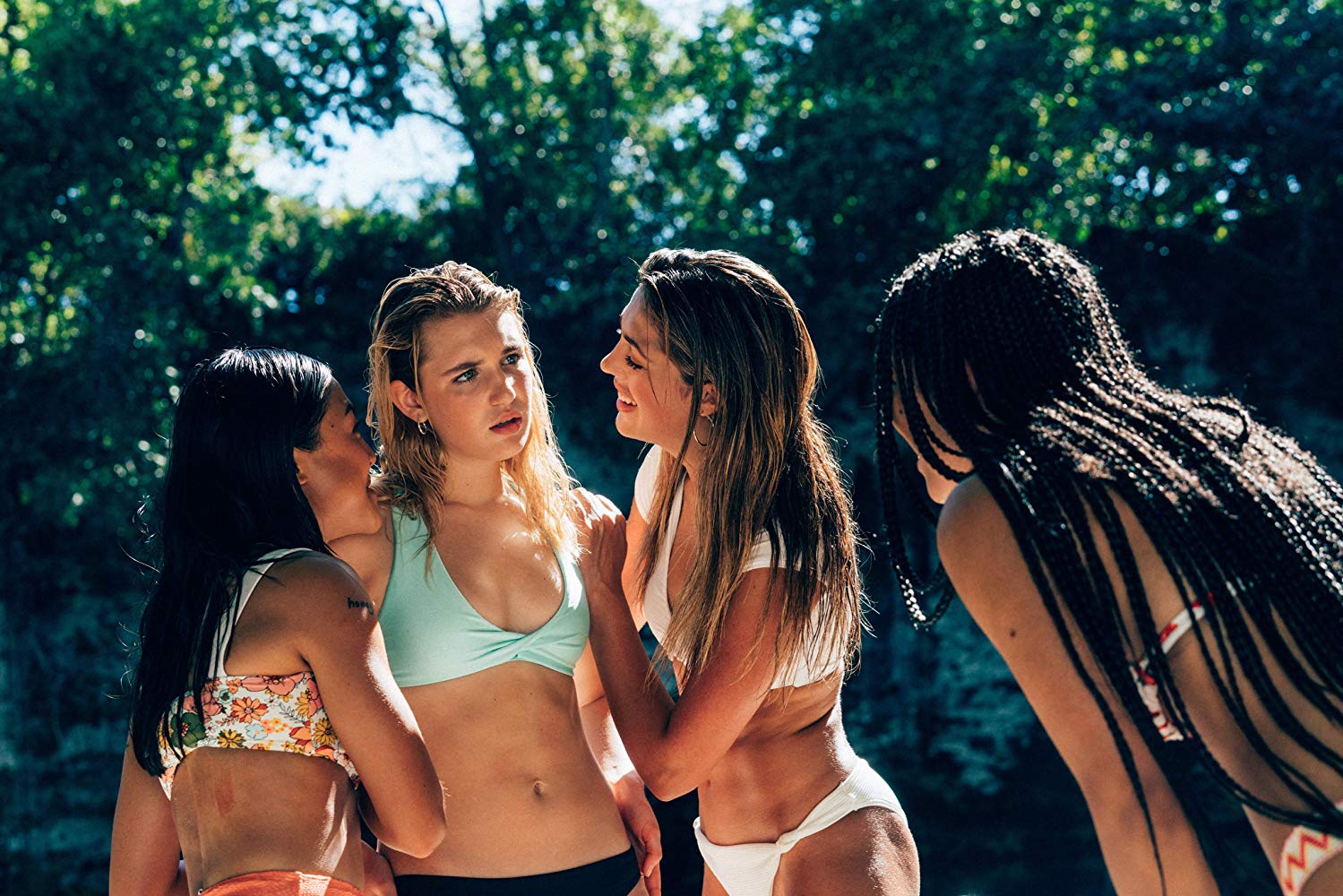 While Johannes Roberts’s 47 Meters Down was marred by strained dialogue and flat characterizations, it certainly knew how to instill a sense of dread in the audience. That film’s premise, about two sisters with conflicting personalities who take an adventurous excursion that goes horribly awry, carries over to 47 Meters Down: Uncaged, though this standalone film is less concerned with exploring its main characters’ familial relationship. And that’s mostly for the better, as it gives Roberts more than enough room to foreground the grueling terror of coming into contact with sharks in the ocean deep.

In its opening stretch, Uncaged aggressively runs the gamut of teen-movie clichés. Indeed, as soon as it’s done establishing the contentious relationship between two stepsisters, shy and awkward Mia (Sophie Nélisse) and outgoing and popular Sasha (Corinne Foxx), the film is flashing the girls’ frustration with their archeologist father, Grant (John Corbett), for spending too much time working. And then there’s Catherine (Brec Bassinger), the prototypical mean girl who fake-apologizes for foisting Mia into the pool outside the international all-girls high school they all attend in Mexico’s Yucatán Peninsula. That Uncaged doesn’t end with Mia, accidentally or otherwise, throwing Catherine into a shark’s maw is the final proof that all of the film’s initially corny character work is in service of absolutely nothing.

Mercifully, though, the film quickly shifts into thriller mode once Sasha drags Mia off to a remote region of the Yucatán, where their father recently discovered a submerged Mayan city. Soon after Mia, Sasha, and the latter’s adventurous friends, Nicole (Sistine Rose Stallone) and Alexa (Brianne Tju), arrive at the site and enjoy a swim above the main entrance to the city, they decide to strap on scuba gear and plunge into the water in order to gawk at the ancient relics that lurk below the surface. One crashed city column later and the girls come face to face with a deadly species of sharks that has evolved to survive in the darkness of the labyrinthine system of caves and tunnels where marine life isn’t supposed to exist.

Roberts wastes no time ratcheting up the tension, and a stifling sense of claustrophobia, once the girls find themselves trapped underwater and are forced to navigate a series of increasingly tight passageways, all while trying to harness the dwindling supply of oxygen from their scuba tanks. The filmmakers sustain this vise-grip suspense as the girls continue to face an array of unexpected, increasingly challenging obstacles, which, in fairly realistic fashion, extends their time stuck below the surface alongside the blind yet vicious sharks. At one point, they discover a pocket of air that proves to be as much of a bane as it is a boon.

Throughout, Roberts makes ample use of negative space as Mia and company make their way through the Mayan city with flashlights in hand. All the while, the bubbles from their scuba gear and the clouds of dust caused by falling rocks intensify their feelings of disorientation and panic, while also helpfully obscuring the low-rent nature of the film’s CGI effects. If, toward the end of Uncaged, the impact of these visual tactics is dulled by a few too many “gotcha” moments, the film more or less keeps things efficiently moving, wringing white-knuckle tension less through jump scares than from the darkness of a seemingly infinite void.

Review: Blinded by the Light Is a Wet, Sloppy Kiss to Bruce Springsteen