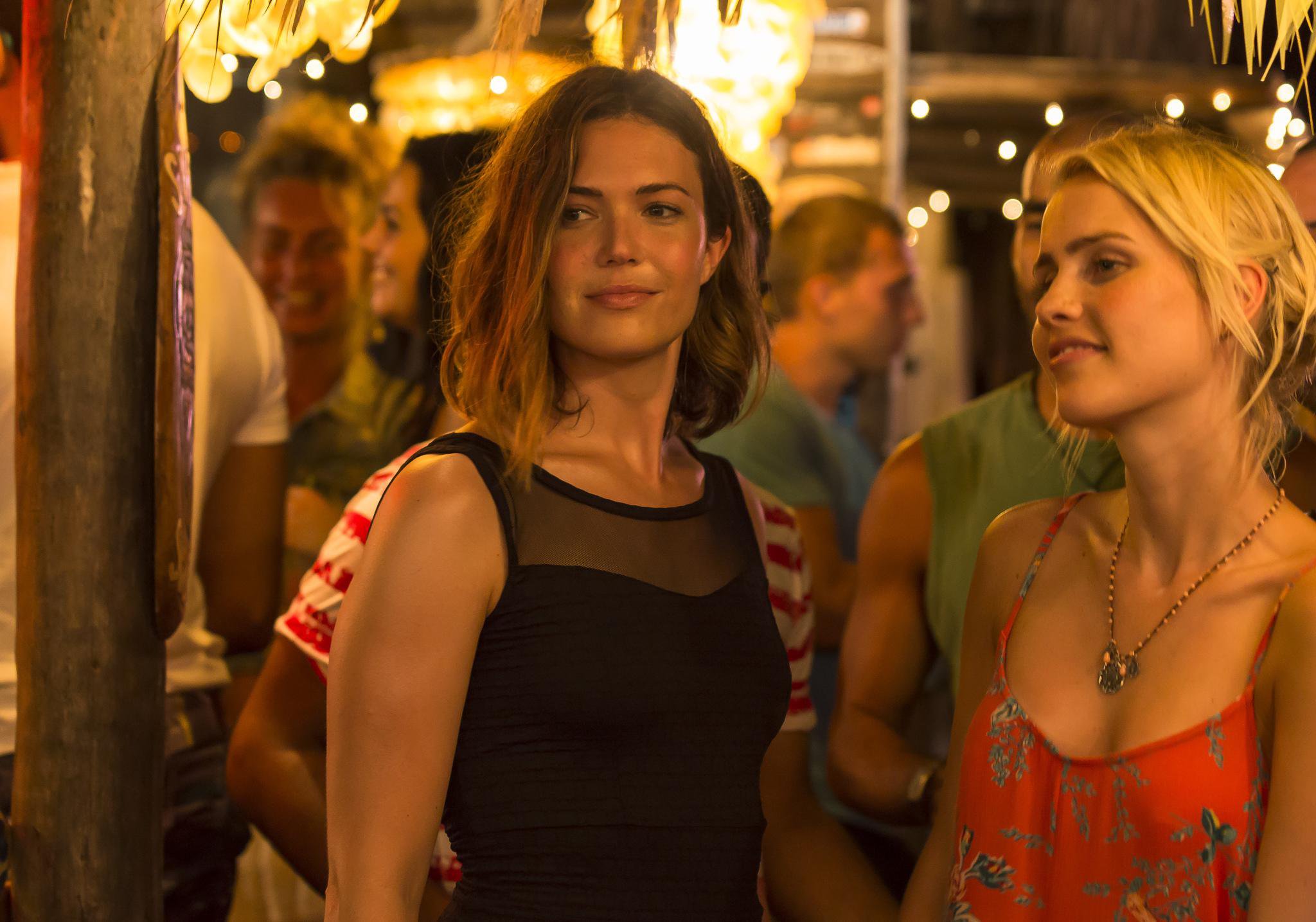 Lisa (Mandy Moore) is so boring that her boyfriend breaks up with her on the eve of a romantic getaway along the Mexican coast, thus sparing himself further contact with her banality. Lisa is so boring, in fact, that her more adventurous, globe-hopping sister, Kate (Claire Holt), who joins her on the trip at the last minute, uses this Achilles’ heel that’s plagued Lisa since childhood to convince her to go shark-cage diving with a couple of randos they met at a club the previous night. This fairly standard trope of the wounded protagonist fighting to bounce back from trauma by moving outside her comfort zone plays a large role in the opening act of Johannes Roberts’s 47 Meters Down. Yet for all the effort the film puts into setting up Lisa’s general trepidation and tepid personality, those behavioral traits fail to build to a fulfilling emotional arc of redemption or empowerment.

When Lisa and Kate arrive at a pier and catch a glimpse of the rickety ship that will take them diving, Kate has to practically drag Lisa to go face to face with the great whites lurking beneath the water just off the coast. Despite the boat’s obvious state of disrepair and the less-than-legal nature of their expedition, the sisters are given state-of-the-art scuba gear that contains internal microphones and speakers so the women can communicate with each other and the men above. Given the quality of the dialogue, a technological malfunction may have been a wiser narrative development.

For as little thought that’s put into the clunky exposition that weighs down 47 Meters Down’s first act, once the film plunges Lisa and Kate into the underwater realm of the sharks, a claustrophobic atmosphere quickly materializes and intensifies as a series of snafus leads to a snapped cable that sends the sisters plummeting to the ocean floor. As the camera swerves and zooms through the murky, shark-infested water, Roberts conveys the sheer impossibility of navigating this enigmatic space with any degree of assurance. From above, the ship’s captain (Matthew Modine) repeatedly warns Lisa and Kate that they’ll put themselves at risk of getting the bends if they ascend to the surface too quickly without breaking for several minutes to decompress. Confined to the shark cage with their air slowly running out, the sisters are forced to trust three strangers to not leave them behind.

The appearances that the great white sharks make throughout are nonetheless impactful, aided by the surprisingly well-rendered CGI, though it’s nothing short of a contrivance how these enormous beasts repeatedly appear out of nowhere only to clumsily miss the girls’ limbs by inches. As silly as much of 47 Meters Down is, when its characters keep silent, the film imparts a palpable sense of dread surrounding the sisters’ increasingly desperate attempts to make their way to the surface. But like Lisa and Kate’s pendular swings between hope and despair, Roberts’s film can’t help alternating between the genuinely terrifying and the just plain dumb. Even the conclusion, which by its very construction should be purely thrilling, is needlessly complicated and confounded by a callback to a warning given to Lisa and Kate early in the film. For every moment of tension-filled clarity here, there are two that leave you thinking: Have they all got the bends?