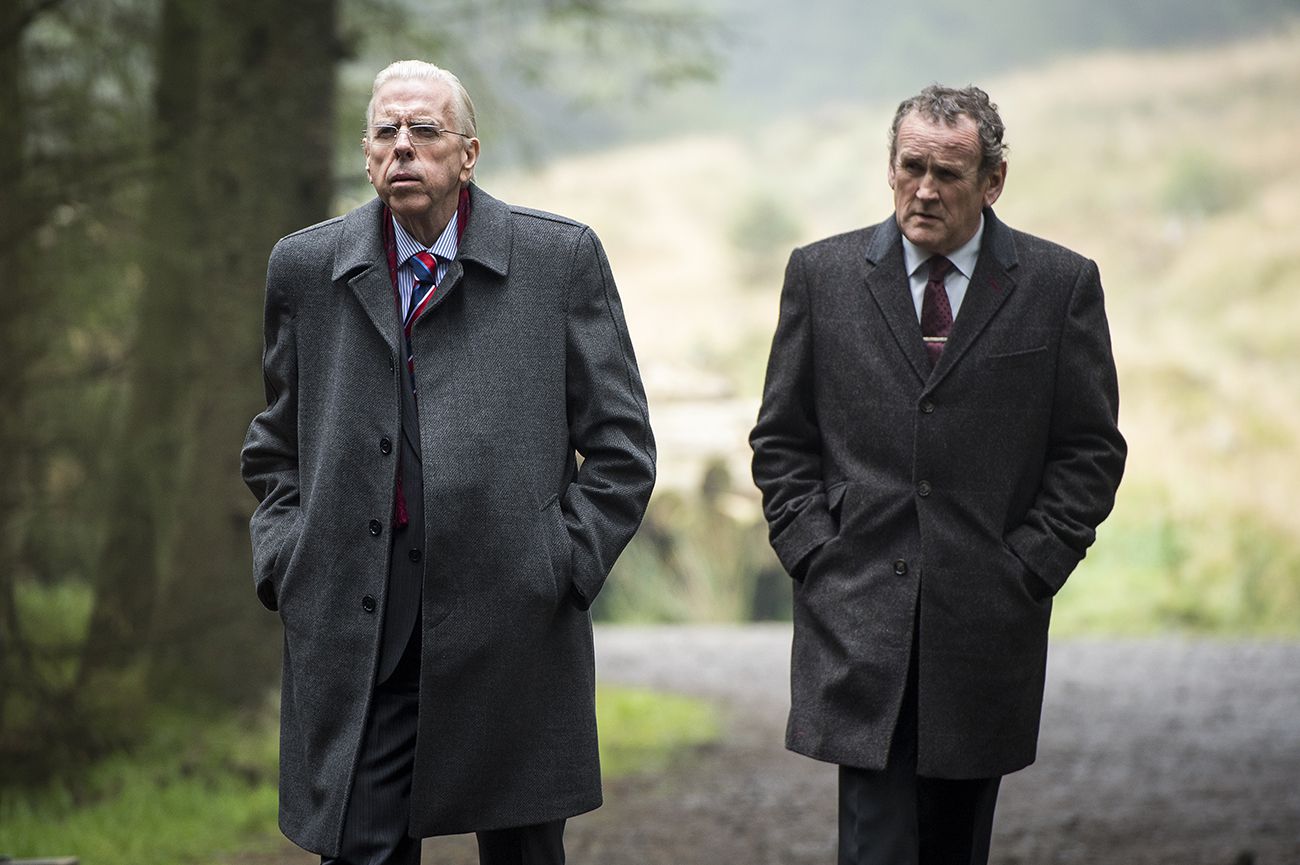 Nick Hamm’s The Journey doesn’t begin with the familiar disclaimer that it’s “based on a true story” or “inspired by true events.” In fact, during its opening stage-setting prologue, a card makes clear that the film’s depiction of the conversation between Democratic Unionist leader Reverend Ian Paisley (Timothy Spall) and Sinn Féin politician Martin McGuinness (Colm Meaney) that led to a peaceful end in 2006 to Northern Ireland’s Troubles conflict is director Nick Hamm and screenwriter Colin Bateman’s fanciful imagining of historical record. Thus, the filmmakers lay the groundwork for viewers to take The Journey as speculative fantasy, albeit with a real-life outcome.

Though much of the film consists of little more than Paisley and McGuinness verbally parrying back and forth in a moving van, the filmmakers seem so concerned about not making the story feel stagey and claustrophobic that they invent ways of getting the men out of the vehicle; most conspicuous is a flat tire that leads to an extended detour into a forest and an invalid credit card that holds the two men up at a gas station. The film also doesn’t appear to take much stock in the audience’s intelligence. Throughout, the M15 chief, Harry Patterson (John Hurt), who’s rigged the van with a hidden camera and a microphone and is overseeing the ride, makes observations about the two figures’ psychologies that are already plainly evident through the actors’ gestures, as well as offers explanations about the political and historical importance of this discussion that feel more like classroom lectures.

It’s as an acting duel between Spall and Meaney that The Journey most scintillates. Even then, though, it isn’t entirely a balanced fight. Though Meaney plays McGuinness in a naturalistic manner that makes palpable the character’s regrets about the loss of life resulting from his own party’s violent actions, Spall—sporting heavy makeup and buck teeth—takes this role as an opportunity to indulge in his inner ham. No doubt he’s drawing from the way Paisley himself acted and sounded, but while Spall intends to convey the reverend’s regal stature in his body movements and line deliveries, his performance mostly comes off as too much distracting external technique.

Beyond the basic suspense it establishes at the beginning of seeing how these two diametrically opposed political figures managed to achieve a peaceful solution to a violent decades-long ethno-nationalist conflict, The Journey exudes an appealing idealism about the potential of people from different walks of life to find common ground. As these filmmakers speculate, Paisley and McGuinness didn’t so much convince each other of the rightness of their respective views as they settled on a kind of ideological détente, coming to respect each other’s tenacity and intelligence through their heated dialectical exchanges. This intellectual back and forth is rendered so compellingly here that one wishes the filmmakers didn’t feel a need to resort to such a surfeit of momentum-killing plot contrivances.