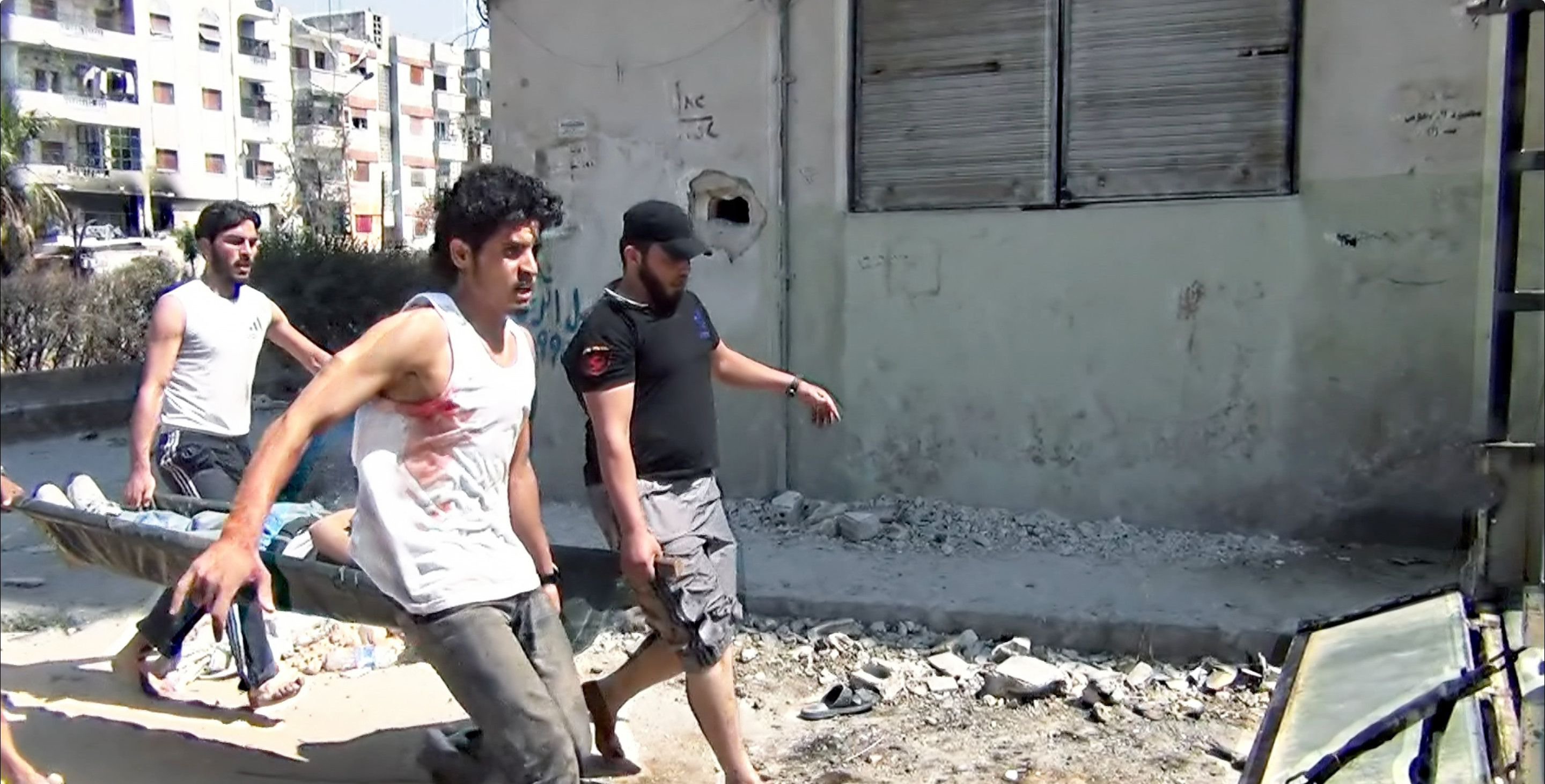 Talal Derki’s Return to Homs is a testament to the power of video to document resistance to corrupt and abusive regimes—in this case, that of Syria’s Bashar al-Assad. It’s also a witness to the limits of that power.

Derki first filmed in Homs, “the capital of the revolution,” in 2011, when the Syrian Uprising was still in its jubilant infancy. The resistance consisted then of unarmed men and boys thronging into public places to hear speeches and celebrate, and shots from above of people holding hands and dancing in concentric circles that move in opposite directions radiate the innocent joy of a Busby Berkeley number. Derki focuses on a small group of key players, including Abdul Basset Saroot (called Basset by his friends and his adoring fans), a soccer star turned hero of the revolution, who crowd-surfs the streets and delivers eloquent speeches from improvised platforms. (Basset is a made-for-Hollywood star—a natural leader and a babe, with his dense, curly hair and soul patch.) These images are captured by Derki, producer and co-cinematographer Orwa Nyrabia, and their friend and fellow “media activist” Ossama al Homsi, who hope to use them to ignite worldwide support for their cause.

Derki returned in 2012, after Nyrabia fled the country following his detention by the regime. More than a year later, the resistance is now a fully armed rebellion, many rebels and civilians are dead or seriously wounded, and the neighborhoods where the fighters are based are a mass of rubble and crippled buildings with blown-off façades. Enough time has elapsed since his first round of shooting for grievous physical wounds to heal and psychic wounds to open.

Derki and his comrades document the fragility of life and the breakdown of society in the ruined city in staggering scenes like a shot of a little pod of rebels clustered on the concrete floor of a bombed-out building, waving to another tiny group in another faceless building across the street. And in one nearly three-minute tracking shot, the director walks through a series of abandoned houses (the safest way to travel through a sniper-ridden neighborhood), stepping through great ragged holes in the walls from one to the next as a camera follows him, occasionally swinging around to document an eerily empty bedroom or living room.

But with the exception of Basset and the director (in voiceover), these rebels barely talk while the cameras are rolling, leaving the audience to guess at their thoughts, feelings, and aspirations. Basset may outline the corruption the rebels are opposing, but he never mentions what they support. Leaving that question unanswered is a major oversight in a documentary about a revolution—especially one that aims to create support for the fighters. Unlike the Egyptians Jehane Noujaim followed in The Square, these rebels never discuss their vision for a new government. Meanwhile, Basset’s many references to the glory of martyrdom, along with the absence of any women from the ranks of the resistance, leave the impression that the goal of the men of Homs may be an Islamist theocracy—something that may not find popular support with the majority of the film’s intended international audience.

Basset’s confidence and charisma give the film much of its focus and sense of momentum, especially in the later footage, after Assad’s grip on the city has tightened and Basset’s comrades have dwindled to a defiant handful. After more than a year of fighting, though, even he has lost faith in his side’s ability to win. He’s soldiering on, he says, for the glory of martyrdom and the relief of oblivion, which he calls “God’s greatest gift.”

As terrible as the devastation of Homs and its inhabitants surely is, and as sad as it is to see this vibrant young man lose faith, the cynicism Derki and Basset express about the power of documenting and sharing their story feels somewhat misplaced. The media activists who risked their lives to record these scenes did so at first, Derki says in 2012, with an optimistic certainty that “these images would shake the world to its core.” Instead, he says bitterly, “The world watches what is happening, how we are getting killed one by one, while it is silent as a graveyard.” But while the world may not have given them the unqualified support they want, it has hardly been silent on the subject of the conflict in Syria—and one of the main reasons it hesitates to do more is uncertainty over what kind of government the rebels are fighting for. Return to Homs doesn’t make that murky point any clearer.