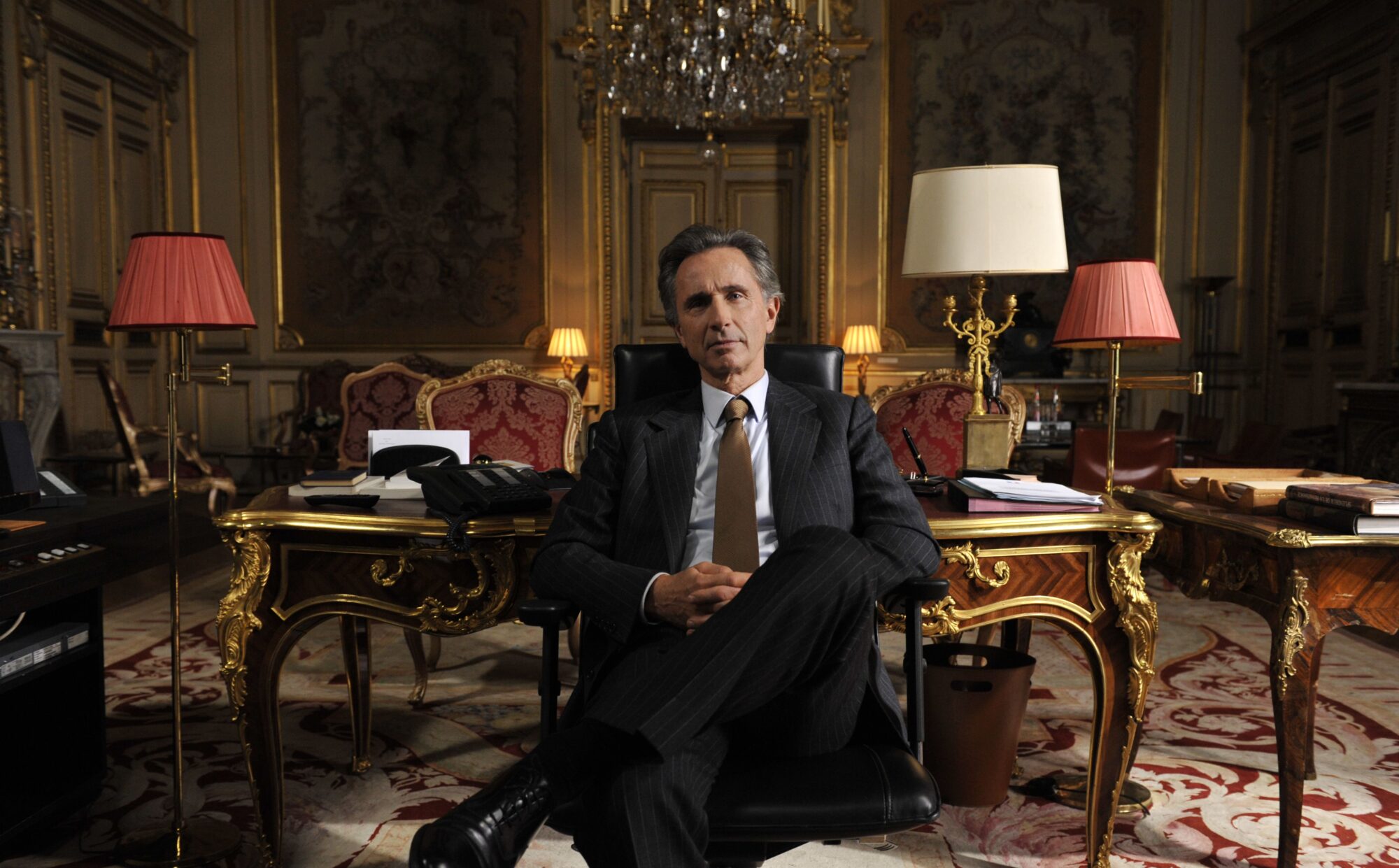 With its broad performances, rapid-fire pacing, and rampant visual and verbal gags, The French Minister, Bernard Tavernier’s first attempt at an out-and-out comedy, doesn’t try too hard to hide its graphic-novel origins; it’s political burlesque through and through. Lest that suggest the kind of over-familiar snarky glibness about politics that marred Charlie Wilson’s War, Tavernier manages to inject within the showily comic surfaces of the film a measure of genuine wit and curiosity about the story’s particular milieu that elevates it above most other satires of this stripe.

Consider, for instance, the film’s sheer energy level. On one level, Tavernier—taking inspiration from the graphic novel Quai d’Orsay by Antonin Baudry and Christophe Blain, who both wrote the screen adaptation—is fashioning a breathless screwball comedy out of the blustery machinations of French Minister of Foreign Affairs Alexandre Taillard de Worms (Thierry Lhermitte), and through the point of view of his young new speechwriter, Arthur Vlaminck (Raphaël Personnaz). On a deeper level, though, the film’s high-speed approach is also the filmmaker’s way of evoking the whirlwind diplomatic life at the Ministry of Foreign Affairs, where split-second decisions often need to be made when the fate of the world is on the line.

Amid the rat-a-tat pacing, Tavernier captures colorful details about working at the Ministry: the lack of Wi-Fi access, the sense of one-upmanship among colleagues, even the cat that saunters around the premises. Tavernier pulls off a remarkable balancing act of not only fashioning comedy out of diplomatic politics, but giving us an insightful window into the quirks of that life.

More remarkable is the way the filmmaker manages to send up the various personalities walking through halls of power without stopping to outright condescension. Even when de Worms is at his most ridiculous, whether lecturing a staffer on the usefulness of colored highlighters or sucking up to a writer (Jane Birkin) during a lunch, an underlying respect for him peeks through the broad satire. As much as Vlaminck tries to remain above the political maneuvering, as evidenced by the way he makes fun of de Worms to his friends outside of the office, he also gradually begins to see the canny politician behind the vanity and seemingly nutty sloganeering (the latter of which Tavernier reflects on screen with periodic title cards of the Heraclitus quotes de Worms loves to spout off to his staff members on occasion).

Tavernier doesn’t force such details down the audience’s throat; he’s too busy keeping up with the fast-paced political lifestyle to dwell on what might have been emotional high points in a different film. But it’s such seemingly offhand attention to detail that gives The French Minister its subtle richness, making it something more than just a spectacle of shooting fish in a barrel. Through the film’s intoxicating whizz-bang swirl, Tavernier still has enough of his wits about him to put it all in perspective at the end via an ambiguous postscript voiced by Vlaminck himself: Even the most inspiring political triumphs aren’t, to borrow a phrase from that covert political activist Rick Blaine in Casablanca, worth a hill of beans in the crazy political world.