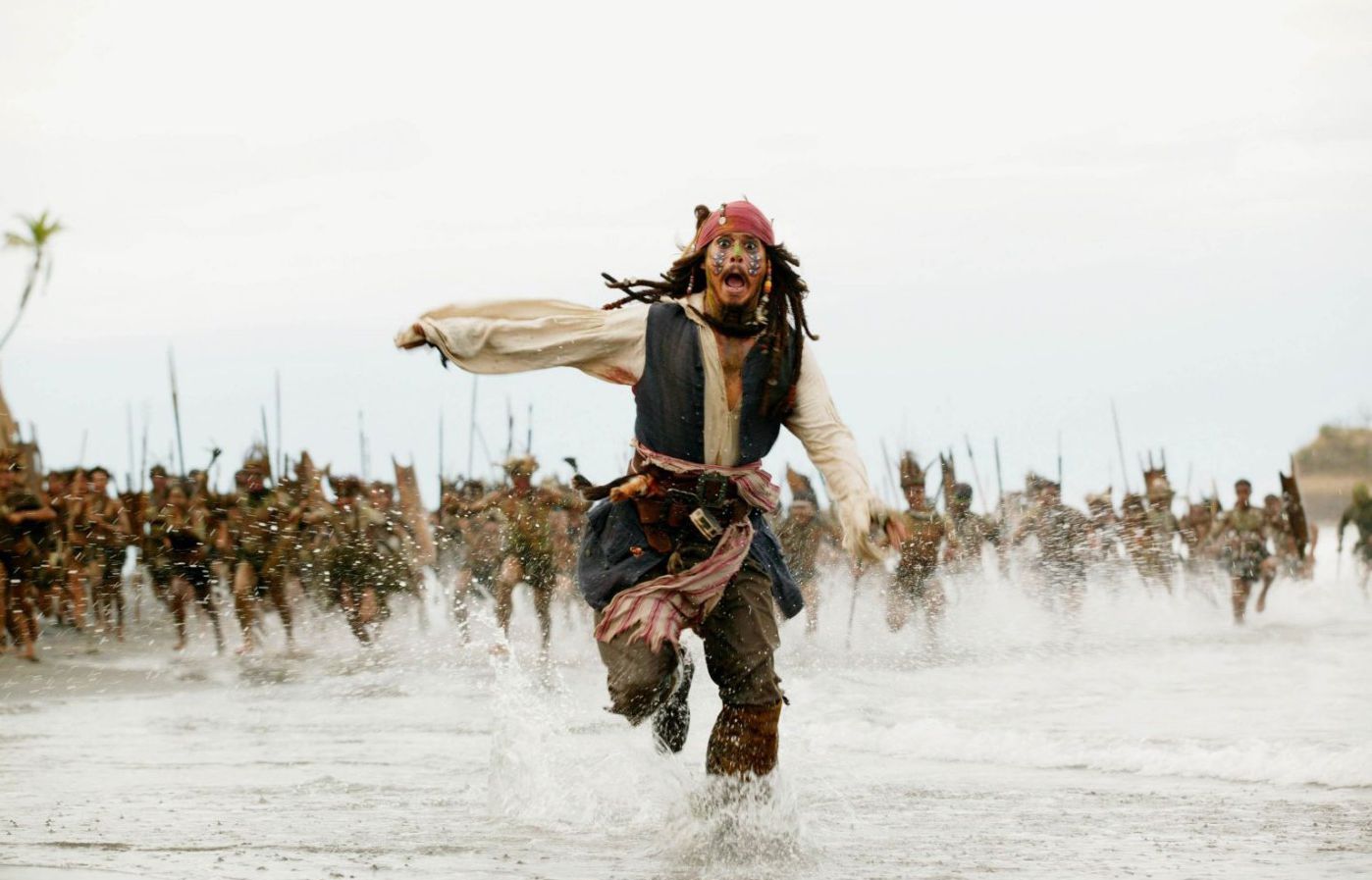 Even for a sequel, Pirates of the Caribbean: Dead Man’s Chest takes the practice of double-dipping to extreme depths, its guiding principle—as was the case with its predecessor’s third act—being that once is fun but twice is nicer: in this case, two villains, two love triangles, two self-sacrificing fathers, two CG centerpieces involving a leviathan, and two bustling sequences in which characters dash down a tropical forest mountainside in/on round contraptions. It’s the last of these that most accurately exemplifies Gore Verbinski’s follow-up to his 2003 blockbuster, his newest swashbuckler something of an awkwardly constructed Disney World ride that begins listlessly and gradually gains momentum as it dispenses with all non-action-oriented concerns. As with its antecedent, Dead Man’s Chest finds Johnny Depp’s flamboyantly foppish scoundrel Jack Sparrow being hunted by both human and inhuman foe alike, the former an East India Trading Company heavy named Beckett (Tom Hollander) who desires Sparrow’s magical compass, and the latter the legendary locker-keeper Davy Jones (Bill Nighy), who wishes to collect on a soul-debt owed to him by the roguish, dreadlocked pirate.

The film’s regurgitating modus operandi extends to its tongue-in-cheek (gallows) humor and set pieces’ spirited rowdiness, as well as to the fact that noble Will Turner (Orlando Bloom) and spunky Elizabeth Swann (Keira Knightley)—whose wedding ceremony is rudely postponed by the malevolent forces of the British Crown—remain the leaden anchor of this Mouse House franchise, their spick-and-span goodness a woefully feeble counterpoint to ne’er-do-well Sparrow’s deceptiveness. With its narrative course plotted along familiar routes, Dead Man’s Chest lacks a needed spark of novelty and inspired, devil-may-care gusto. But even more problematic is that it fails to appreciably expand upon the original’s sturdy template, exhibiting only a passing interest in its latent themes—regarding love, honor, patriarchy, and colonialism’s taming of the savage world (and the subsequent consequences for iconoclastic rebels like Jack)—and never yielding, with the squid-faced Jones and his barnacled, crustaceous Flying Dutchman crewman, a fantastically magical moment on par with The Curse of the Black Pearl’s exquisite first shot of moonlit skeleton swabs.

Verbinski’s extravaganza nonetheless reaps modest rewards from rambunctiousness, its skirmishes featuring the many-tentacled Kracken orchestrated with thunderous intensity and a scene (seemingly set on Skull Island) in which a Colonel Kurtz-ish Sparrow flees his stereotypically ooga-booga minions enlivened by giddy pole-vaulting acrobatics. Moreover, for all its duplicative tendencies, Dead Man’s Chest ultimately stays just afloat thanks to Depp’s uniquely idiosyncratic scalawag, the actor imbuing his preening, loose-limbed pirate with a drunken dancer’s grace and a combination of colorful Walt Disney charm and rascally Chuck Jones mischievousness. As befitting his position as this high seas adventure’s sashaying center of attention, Sparrow is, at film’s cliffhanger conclusion, given one marvelously valiant composition that rightfully elevates the duplicitous, selfish character beyond mere cartoon caricature and into the realm of anti-heroic icon. And thus it comes as little surprise that the story’s soggiest element turns out to be its attempted romantic tension between Sparrow, Turner, and Swann, an endeavor doomed by the charisma-imbalance of its three leads and the obvious fact that Sparrow’s devious appeal lies, first and foremost, in his boundless self-love.