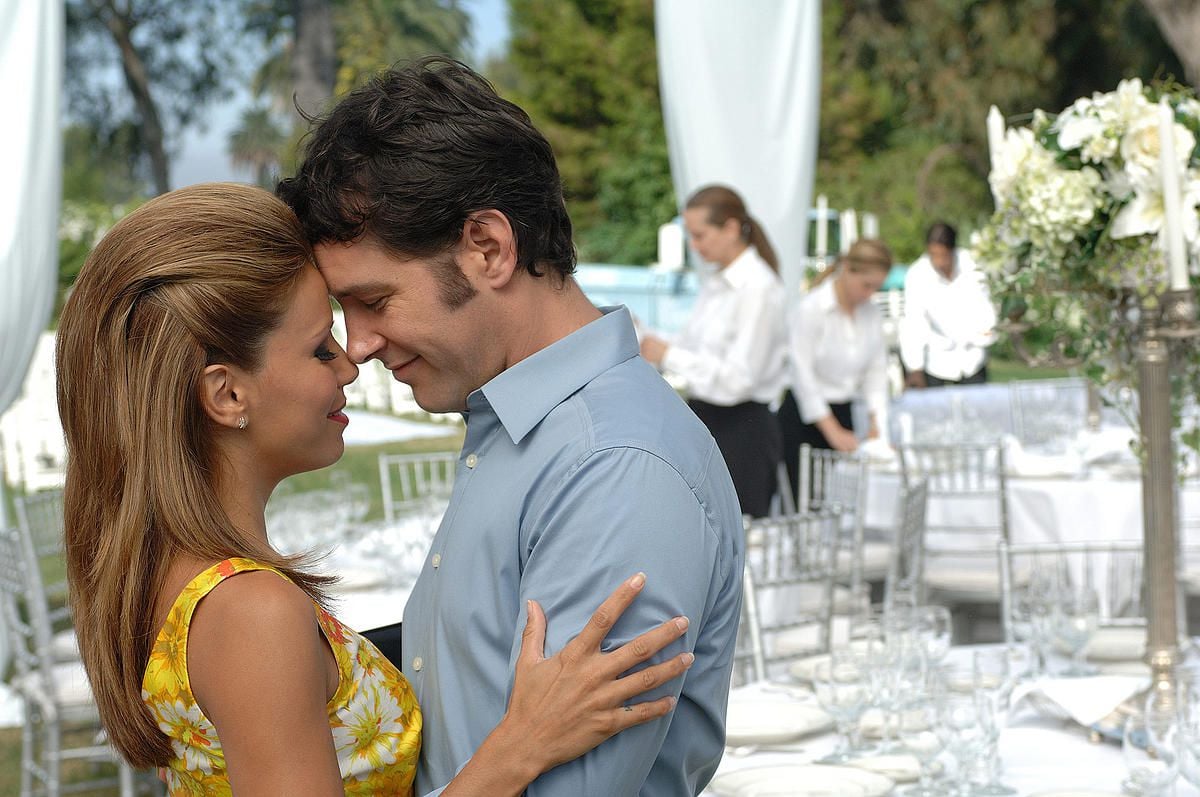 For a pure shot of cinematic depression, nothing quite tops opening credits that end with “…and Jason Biggs.” True to form, Biggs plays an insufferable goofus in Over Her Dead Body, wildly flailing about while on fire, awkwardly standing around shirtless, and lamely affecting queerness as the assistant and best friend to Ashley (Lake Bell), a psychic/caterer who finds herself in quite the quirky predicament upon being visited by veterinarian Henry (Paul Rudd) and, shortly thereafter, by the ghost of Henry’s dead fiancé Kate (Eva Longoria Parker). On her wedding day, Kate argues that an ice sculpture of an angel is inaccurate because it doesn’t have wings, then learns the truth about the afterlife when the carved ice creation squashes her and she winds up in a pit stop to heaven, bitching and moaning to such a degree that she fails to learn the details of her angelic earthbound mission. Kate thus returns to the land of the living and takes it upon herself to prevent Henry and Ashley from falling in love by driving the latter—who can see ghosts, because she’s a psychic—insane, which in Jeff Lowell’s dreary big-screen sitcom means pouting, making fart noises, and interrupting the new couple during sex.

Over Her Dead Body features an abundance of stillborn scenes, many of which don’t feature Longoria Parker, who—thankfully, given the obnoxiousness of her one-note character—is often kept off-screen to make room for Screenwriting 101 dilemmas and Rudd’s valiant attempts to keep things lively via incessant sarcasm. Ashley receives confused stares from people as she argues with the invisible Kate, but more perplexing is Kate’s decision to spy on Ashley masturbating in the shower, as well as the grouchy phantom’s recurring, eating disorder-encouraging comments about her and the svelte Ashley’s weight. For his maiden outing behind the camera, John Tucker Must Die scribe Lowell exhibits zero directorial flare, but then again, virtually everything about his film is bungled, including Ashley’s supposedly dramatic final choice between Rudd and Biggs, which is something like the choice between laughter and terrorism.