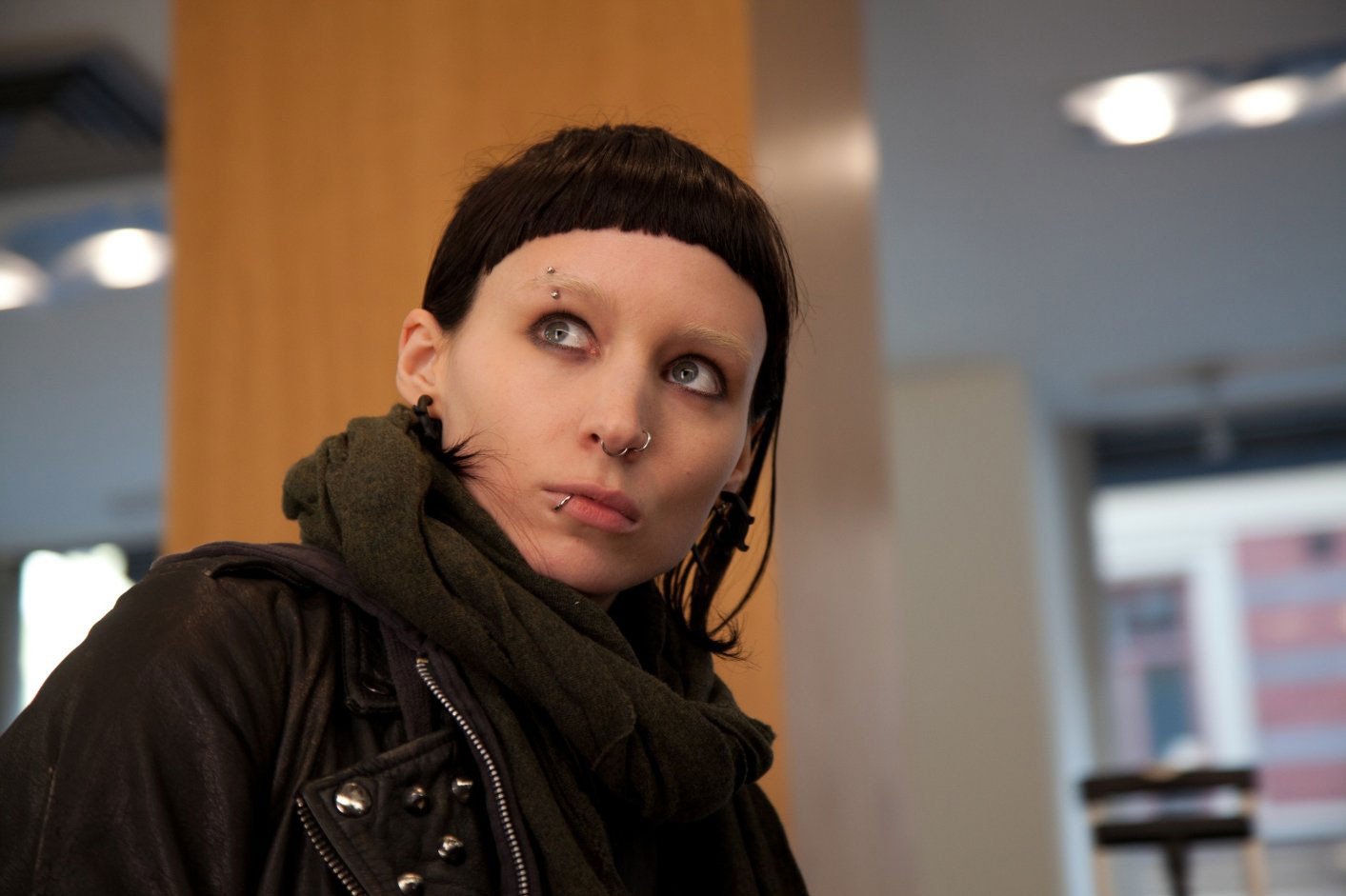 Even the T-shirts are meticulously placed in The Girl with the Dragon Tattoo, like the one with the Nine Inch Nails logo that cutely nods to composer Trent Reznor, or the one that reads, “Fuck You You Fucking Fuck,” and was probably given precise holes and tears by David Fincher himself. Fincher has certainly grown to be quite peerless when it comes to presenting the oxymoronic aesthetic of polished grunge, and his latest marries that look with the themes of techie alienation, investigative obsession, and cold, impossible love that have run through recent works like The Social Network, Zodiac, and The Curious Case of Benjamin Button. The craftsmanship of The Girl with the Dragon Tattoo is as indicative of Fincher’s formal gifts as anything he’s created, and, so as not to disappoint the critics who’ve always chided his films for being chilly, he’s even rigorously considered the story’s climate, taking many opportunities to hurl snow at the screen for good, cheeky measure. All that unignorable, masterly exactitude is going to net a lot of enthusiasm for this film in the Academy’s technical branches. Whether the enthusiasm will go much further than that is another story.

It’s fun to think that the aforementioned, obscenity-laden tee that Lisbeth Salander (Rooney Mara) rocks when she first meets Mikael Blomkvist (Daniel Craig) is directed squarely at Academy members, who last year, at Fincher’s expense, committed their most egregious act of Best Picture fuckuppery since 2005. Perhaps Fincher, who’d already begun production on Dragon Tattoo when The King’s Speech robbed him blind, proceeded to construct the most well-made middle finger of a Social Network follow-up he could think of, demanding attention and then unfurling a how-do-you-like-me-now barrage of sex and violence that’s probably even more loyal to the text than some Stieg Larsson diehards care to witness. Or, perhaps not. In any case, Sony has made it crystal clear that they’ve got high hopes for this beautiful beast, the yearning for Best Picture consideration indicative in everything from the abundant advertising to that ultra-arrogant embargo debacle. Box office could surely help the film’s big-race chances in the closing stretch, as it’s bound to rake in oodles of Oscar-friendly green, but things don’t look so rosy otherwise, and that middle finger, so to speak, may just prove to be a little too off-putting.

A Best Actress nomination for Mara doesn’t seem likely, either, even with the Golden Globe nod and handful of critics’ honors she’s got under her studded belt. Though intoxicating to look at, Mara brings more presence than performance, and her fate appears to be that of a fan favorite, not an Oscar favorite (for what it’s worth, she may have stood a chance in a weaker year, which didn’t have four apparent locks and a fifth spot fiercely sought after by baitier comers). Her Director, presumed by some to be an early frontrunner, will probably join her at the losers’ table for a whole mess of reasons, some already named, some not (like plain-old Fincher fatigue, or the fact that Dragon Tattoo is, despite all, a minor Fincher work). Already a sure thing for his contribution to Moneyball, screenwriter Steven Zaillian isn’t likely to hear his name called twice, especially when “unrecycled” Adapted Screenplay choices like The Descendants and The Help will be syphoning away Dragon Tattoo votes.

Yes, it will come down to the aural and visual wizards Fincher has once again corralled around him, like Cinematographer Jeff Cronenweth, Editors Kirk Baxter and Angus Wall, and Original Score virtuosos Reznor and Atticus Ross. Despite their unique and painstaking efforts to endow Dragon Tattoo with a highly appropriate and signature electronic accompaniment, the latter duo probably has the poorest chance at scoring back-to-back nominations, if only because their work is so specific, it’ll leave voters feeling a little too much déjà vu. Cronenweth’s gunmetal-tinged handiwork is excellent, and should make him a contender despite the all-but-locked quartet of Robert Richardson (Hugo), Emmanuel Lubezki (The Tree of Life), Janusz Kamiński (War Horse), and Guillame Schiffman (The Artist) standing in his way (“should” being the operative word). And, last but not least, there are few editors more deserving of Oscar nominations this year than Baxter and Wall, whose thrillingly sharp cuts string this gynecide yarn together with a zeal to (nearly) rival their splicing for The Social Network. So much of what makes Dragon Tattoo so nimble at 158 minutes—and so much of what makes you want to do everything more efficiently when you leave—is an ever-active construction in step with Salander’s genius. Academy voters shouldn’t get hung up on this movie’s hard-rock edge; it’s a razor’s edge that marks its formidability.